With most concerts postponed or canceled due to COVID-19, 2020 was a historically devastating year for live music and the creative ecosystems built around the industry. Despite these circumstances, each of our Levitt AMP grantees found innovative ways to keep their communities engaged through music, sparking joy and connection while providing paid performance opportunities for musicians. In addition to participating in the program-wide 2020 Levitt AMP Virtual Music Series, several grantees used funds from Levitt AMP Bridge Grants to bring free, live concerts to their communities in unconventional ways, both virtually and in-person. In today’s entry in our series on the impact of Bridge Grants, we’re honing in on how three Levitt AMP Communities — Sheboygan, Wis., Fort Smith, Ark., and Whitesburg, Ky. — creatively presented mobile, pop-up and drive-in shows in 2020.

Music on the move

Last summer in Sheboygan, the John Michael Kohler Arts Center (JMKAC) — a Levitt AMP grantee since 2015 — presented a series of outdoor mobile concerts designed to bring the joy of live music to residents in all parts of the community. On five Thursday nights in June, July and August, the nonprofit transformed its open-air Culinary Art Car into a stage on wheels, and with two to three musicians atop the vehicle, headed into neighborhoods in all four quadrants of the city. Working with the City of Sheboygan, JMKAC mapped out stops for mini-concerts in locations with ample space for social distancing, such as parks. The fifth concert specifically targeted senior care facilities. Although crowd sizes remained small, the mobility of the concert allowed the music to reach up to 300 people over the course of a given night. The shows were also broadcast on Facebook Live, where they reached an average of 1,000 people. 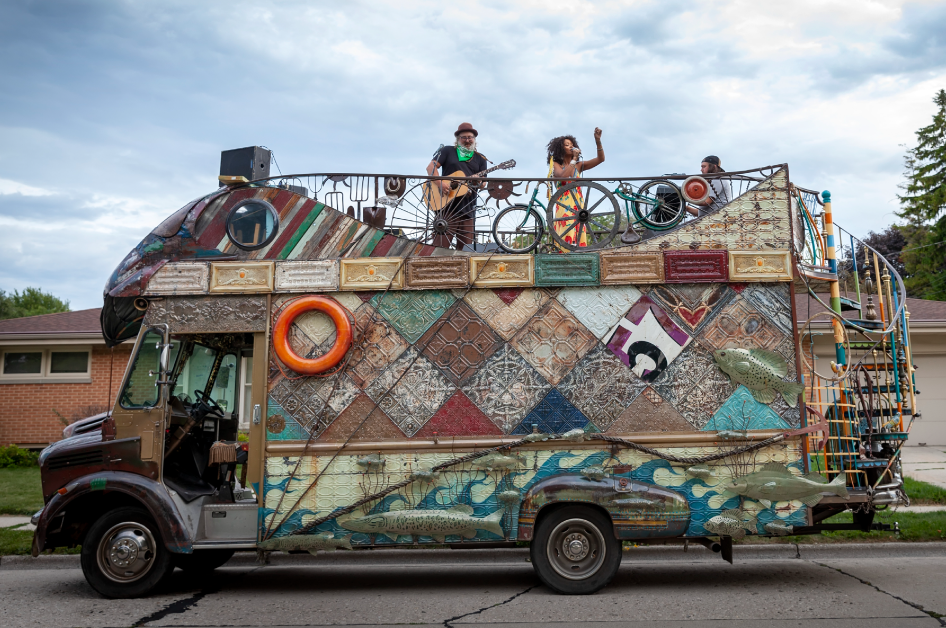 Funds from a Levitt AMP Bridge Grant went towards artist fees. With genres including classical, soul, folk and hip-hop, the series showcased a talented array of Southern Wisconsin-based musicians, including three past Levitt AMP Sheboygan performers — Copper Box, Q the Sun & the Browns Crew, and The People Brothers Band. According to Angela Ramey, JMKAC Performing Arts Coordinator, last summer’s mobile concerts succeeded in uplifting the community, and provided a much-needed boost to local musicians. “The Bridge Grant allowed us to pay these amazing musicians fair artist fees and gave them a stage to perform,” says Ramey, adding that, “they successfully generated a creative exchange between artists and the community.” In addition to the mobile concerts, JMKAC hosted weekly virtual events called “Thursday Nights Together (At A Distance),” encouraging community members to celebrate on their lawns with free artmaking kits and curated Spotify playlists featuring past and future Levitt AMP Sheboygan artists. Later this year, the Levitt AMP Sheboygan Music Series is set to return to the city’s lush City Green — stay tuned for details! 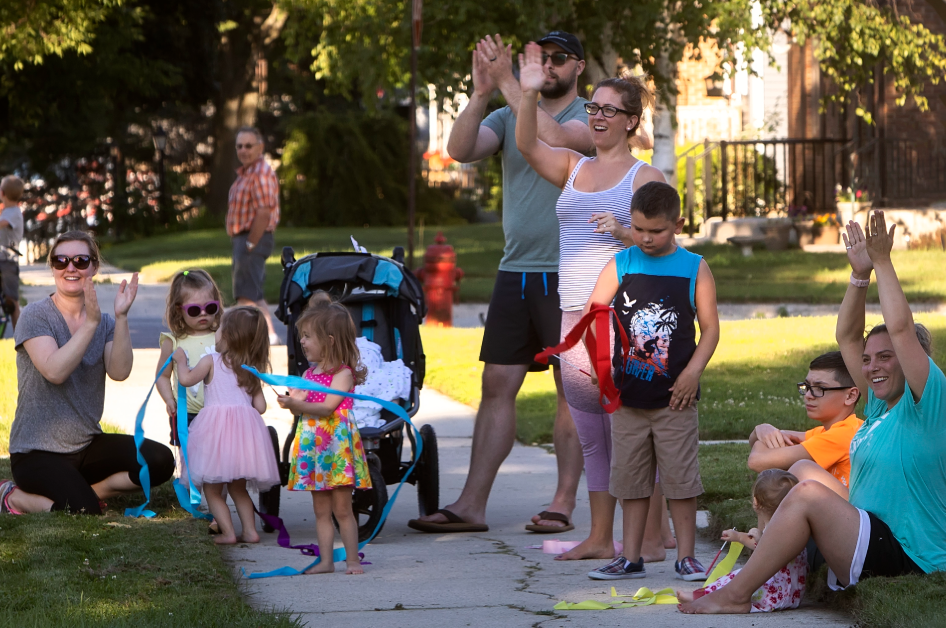 A small crowd cheers on the mobile concert from the sidewalk

First-time Levitt AMP grantee 64.6 Downtown, a nonprofit dedicated to bringing arts, culture, recreation, dining and commerce to downtown Fort Smith, Ark., leveraged funds from a Levitt AMP Bridge Grant to present a night of pop-up mini-concerts across the city last July in celebration of the community’s resilience during the pandemic. Using a flatbed truck for transportation, the concert stopped at locations throughout Fort Smith including multi-family apartment complexes, single family homes, a skate park and the atrium of an outdoor shopping plaza. According to Talicia Richardson, 64.6 Downtown’s executive director, the mobile setup helped make the event accessible to everyone. “By meeting people where they were, different demographic groups across Fort Smith were able to access and enjoy the show” says Richardson.

For the music, 64.6 Downtown tapped Fort Smith native Genine LaTrice Perez, a self-taught jazz and R&B singer known for her vintage vocal style. “Genine’s upbeat, high-energy performance style was the perfect complement for this kind of experience,” Richardson says of Perez. Overall, she adds, the event succeeded in its goals of creating connections and celebrating the resilient spirit of Fort Smith: “Being able to bring so many people together for music and dancing in a safe environment was refreshing, and simply a joy to watch.” Last week, 64.6 Downtown announced that Perez will headline opening night of the 2021 Levitt AMP Fort Smith Music Series on May 13th, kicking off a summer of live music on the Riverfront in downtown Fort Smith.

Genine LaTrice Perez performs at a park in Fort Smith

Honk if you love live music

Last July in Whitesburg, Ky., organizers of the Levitt AMP Whitesburg Music Series presented two drive-in shows, giving the community an opportunity to enjoy in-person live music while staying safe using the social distance provided by parked personal vehicles. The music series’ planning committee — composed of representatives from the Cowan Community Center, the City of Whitesburg, Mountain Heritage Festival Committee, and Appalshop — began exploring alternative ways to foster community wellbeing through music soon after the 2020 Levitt AMP Whitesburg Music Series was postponed, and were inspired to present drive-in shows after witnessing the success of a similar concept being used for church services. Organizers worked closely with the local county health department to plan the concerts in the parking lots of a local business and commercial kitchen, both accessible open spaces in downtown Whitesburg with plenty of room for vehicles. Funds from a Levitt AMP Bridge Grant supported about a third of the total cost of the shows, with Levitt AMP Whitesburg series sponsors Appalachian Regional Healthcare and Appalachian Impact Fund providing the rest. 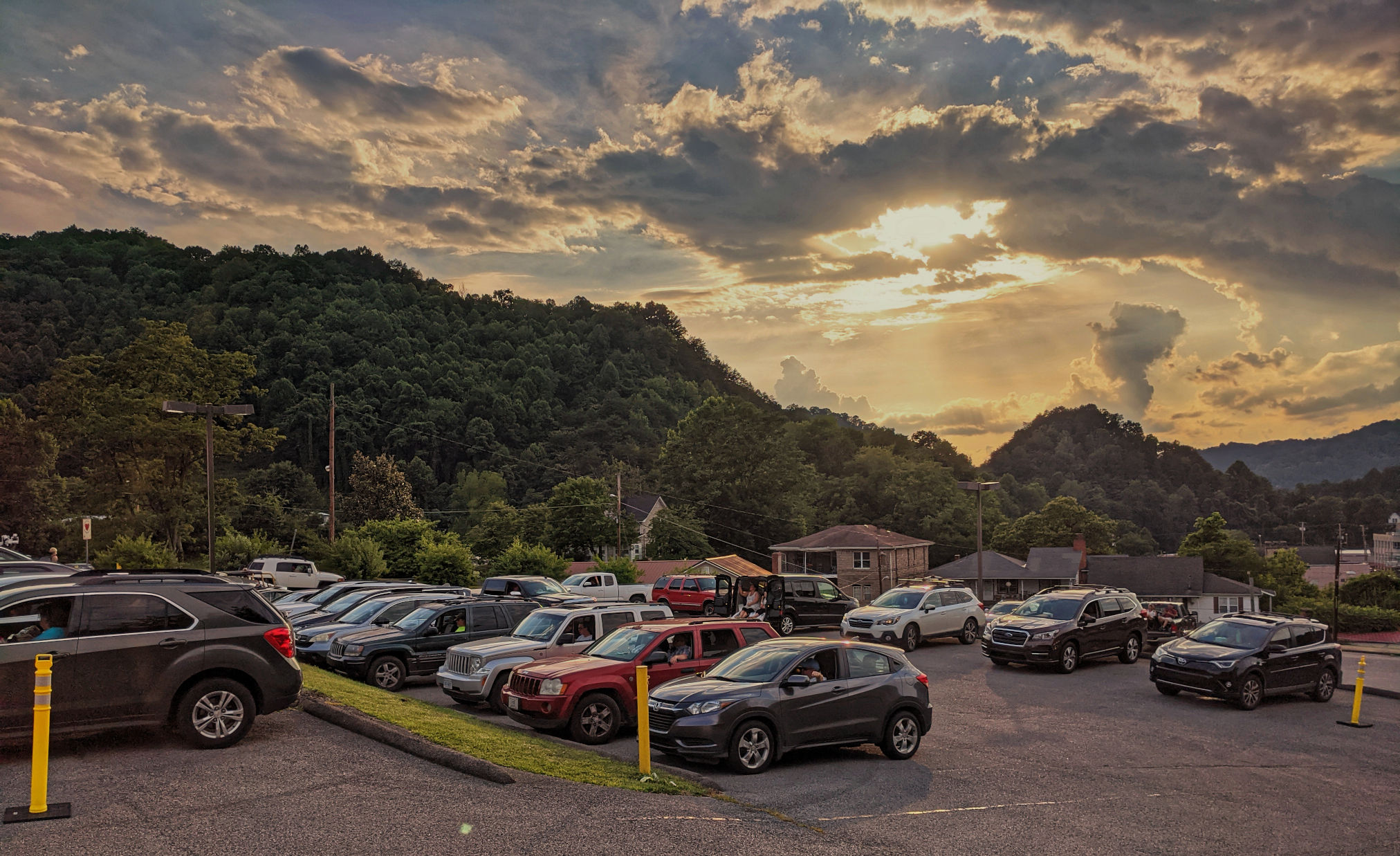 The scenery at a drive-in show in downtown Whitesburg

Each drive-in show had a distinctive sound — the first, which was also streamed live as part of the Levitt AMP Virtual Music Series, featured internationally acclaimed folk/country/Appalachian band Wayne Graham, founded by brothers (and Whitesburg natives) Kenny and Hayden Miles, while the second featured GRAMMY-nominated Kreole rock/soul artist Sean Ardoin with support from Zydekool. In total, the shows were attended by about 300 people, spread across 75 vehicles, with another 1,600 tuning in online. Severe weather disrupted plans for a third drive-in show, featuring Reverend Peyton’s Big Damn Band, though the music continued virtually with a live stream from the artist’s home in Nashville. In addition to the music, workers from the Cowan Community Center and CANE Kitchen distributed hundreds of healthy meals to people in need at each drive-in show. 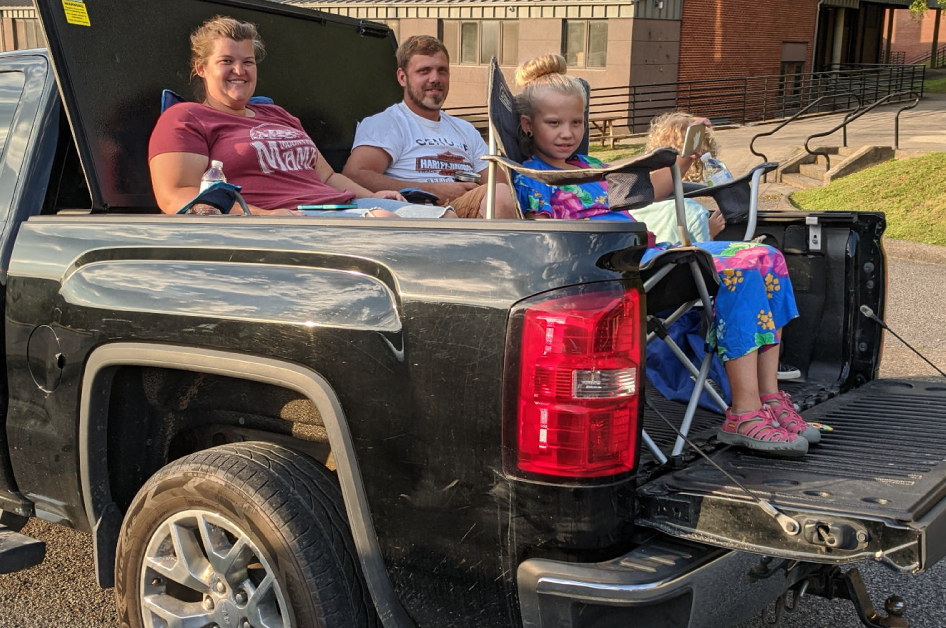 A family enjoys the music at a drive-in concert in Whitesburg, Kentucky

According to Steve Ruth, Levitt AMP Whitesburg Series Coordinator, the drive-in shows were embraced by the community and generated renewed enthusiasm for the 2021 Levitt AMP Whitesburg Music Series. “The live music experience is an integral part of our community, and it was sorely missed during the pandemic,” says Ruth. “The response to the opportunity to hear and experience live music was overwhelming, and it spurred our sponsorship efforts, allowing us to increase our performance budget by 20 percent for the upcoming series.”  This summer, Levitt AMP Whitesburg will return to a re-purposed railroad depot in the heart of its downtown for another summer of free community-building concerts. More details are coming soon!

During a time when safe, accessible arts experiences were few and far between, we’re incredibly proud of how Levitt AMP grantees adapted to engage the community and keep the music playing. As widespread COVID-19 vaccination continues throughout the US, we are hopeful that people will once again be able to gather at Levitt AMP concert sites to enjoy music together, further activating these spaces and strengthening the connections between friends and neighbors. Keep an eye on our website and social media for 2021 Levitt AMP Music Series announcements, and more information about Levitt AMP concerts across the country.