This energetic family affair, dubbed “New Artist You Need to Know” by Rolling Stone, will present electrifying evenings of danceable pop, soul and rock & roll. As a collaborative programming effort of the Levitt network, The New Respects will mark the return of the tour, which began in 2014 with the world-music fusion of Playing For Change. A highlight of the free concert seasons at Levitt venues across the country, other Levitt National Tour artists have included Flor De Toloache (2019) with their blend of traditional mariachi with jazz, salsa and pop music; Southern rocker Paul Thorn and gospel legends Blind Boys of Alabama (2018); Gulf Coast soul sensation The Suffers (2017); and genre-busting violin duo Black Violin (2015).

“The Levitt mission is to bring people together through the power of free, live music. As each of our venue partners prepares for a full summer season of free music under the stars, we are thrilled their lineups will include this dynamic band with the return of the Levitt National Tour,” says Sharon Yazowski, executive director of the Mortimer & Mimi Levitt Foundation. “From the first downbeat, people of all ages and backgrounds love The New Respects, drawn to their positive vibe and upbeat grooves. Their shows are a celebration all-around and Levitt audiences are in for a super fun time.” 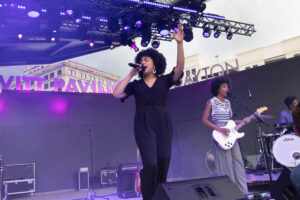 The New Respects have dazzled Levitt audiences in Bethlehem and Dayton, as well as Levitt AMP sites in Ocala, Fla., Trenton, N.J. and in Middlesboro and Whitesburg, Ky. The group looks forward to returning to some of these Levitt stages as part of the tour. “What I really enjoy about Levitt is the community aspect that we feel from the audience. That is a really cool experience! We’ve played a few different Levitt shows, and it’s rare that you feel a sense of community in places where you haven’t been. We love that—because that’s a huge part of what we’re about. The Levitt venues are a perfect platform for what we want to share as a band,” says Zandy Mowry.

All Levitt National Tour performances with The New Respects are free and open to the public, providing family-friendly experiences for all ages to enjoy together. Lead vocalist Jasmine Mullen adds, “I think it’s beautiful. It gives people an opportunity to come and hang out where money isn’t an issue. We were fortunate to be exposed to so much music, so much arts, because of where we grew up. To expose people to live music in a new way is really important.” 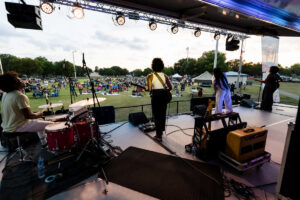 A new component of the 2022 Levitt National Tour will be the introduction of the #LevittTour superfan campaign on the Foundation’s Twitter and Instagram channels. Levitt audiences will have the opportunity to win signed swag from The New Respects in each tour city. Inspired by The New Respects and the Levitt National Tour, fans are encouraged to capture the energy and excitement of the band by sharing photos and videos of their favorite moments from the concert. Additional details will be announced on Twitter and Instagram leading up to each performance date.

Hailing from Nashville, Zandy Mowry lays down the group’s funk-inspired grooves on guitar, her brother Darius Fitzgerald drives the beat with his retro rhythms and their cousin Jasmine Mullen brings it all together with soaring lead vocals.

Having performed together since their youth, the 20-something trio uplifts audiences with their playful, energetic and familiar vibe. As the daughter of two songwriters—including award-winning gospel singer-songwriter Nicole C. Mullen—lead vocalist Jasmine Mullen began developing her songwriting prowess as a young child. As high schoolers, the coed cousins toured as background dancers for Mullen’s mother and formed the first iteration of The New Respects, a folk/indie-rock band called the John Hancock Band. After growing up on a steady musical diet of gospel and The Jackson 5, the Fitzgerald siblings joined Mullen in exploring a wide range of musical styles as they entered adulthood, drawing inspiration from artists like Aretha Franklin, The Rolling Stones and The Beatles as they shaped the eclectic sound of their new band. 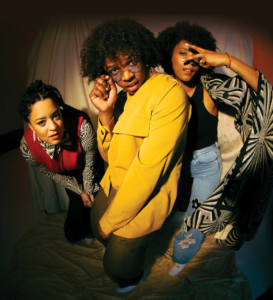 Filled with catchy hooks and fresh throwback-inspired grooves, the group’s debut 5-song EP, Here Comes Trouble (2017), launched them into the national spotlight. Quickly gaining traction with fans and critics alike, the EP’s standout single, “Trouble” garnered over 2 million streams and received sync placements with Fox Sports, ESPN and TNT. On the heels of their success, The New Respects embraced an aggressive touring schedule, opening for Switchfoot, Robert Randolph, O.A.R., and NEEDTOBREATHE, and making appearances at key festivals such as Hangout, Bumbershoot and Rock the Ranch. The group’s star only continued to rise after releasing their 2018 album Before the Sun Goes Down to critical acclaim. With touring halted during the pandemic, The New Respects worked on new music and recently released their first acoustic EP, Don’t Panic (2022), featuring spiritual inspirations to hold onto hope and love during times of uncertainty.

Levitt National Tour audiences are in for an unforgettable evening that’s equal parts eclectic and electric featuring fan favorites “No Drama,” “Freedom,” and “What Makes the World,” plus the debut of new music from their upcoming album this summer! And those eager to experience a taste of The New Respects before the Levitt National Tour can check out their music, including current EP Don’t Panic, on their Spotify channel.