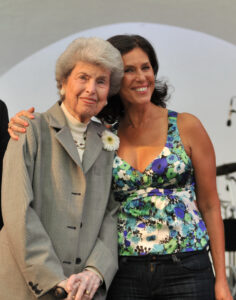 “Coming to The Shell for the first time to meet with local community leaders nearly two decades ago, we knew the magic could, and would, return. Music is a universal language that we all speak and delight in, especially in public spaces where we can celebrate our shared humanity. The Levitt Foundation is incredibly proud to be part of The Shell’s legacy—supporting its rebirth as a cherished gathering place for the entire community,” said Liz Levitt Hirsch, Board President of the Levitt Foundation. “Levitt Shell Memphis has been a beautiful reflection of the Levitt mission, bringing people together from all walks of life to experience acclaimed artists in a free, open lawn setting. The Levitt Shell team has built a strong foundation to continue creating a warm and inclusive environment with accessible arts experiences at its core. We’re excited to watch them soar to new heights.” 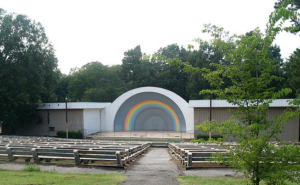 “As a result of the Levitt Foundation’s catalytic investment to save The Shell and consistent annual funding throughout our partnership, the Levitt Shell has flourished to become a citywide destination for multi-cultural programming as well as a committed community partner showcasing other nonprofits at The Shell,” shared Natalie Wilson, former executive director of Levitt Shell Memphis and new executive director of The Overton Park Shell. “Based on the Levitt model, our team has worked hard to ensure The Shell’s viability and built a generous community of local supporters. As we transition to The Overton Park Shell we will continue bringing Memphians together through the power of free, live music with amazing artists. Our mission remains that The Overton Park Shell builds community through music and education, finding common ground in a diverse audience.”

As The Overton Park Shell, the multi-faceted performing arts venue will offer future programming that will continue to build community. Memphians and visitors alike will experience free concerts, ticketed shows and special events as well as health and wellness activities, plus Shell on Wheels pop-up performances will take place in neighborhoods throughout the city. Future events and dates to be announced.

Across the country, the Levitt Foundation partners with nonprofits to strengthen the social fabric of towns and cities by investing in community-driven efforts to reinvigorate public spaces through free music series, including outdoor Levitt music venues and Levitt AMP concert sites. The Foundation’s impactful venture philanthropy model centers on public/private partnerships, grants, shared resources and ongoing support in collaboration with local efforts. 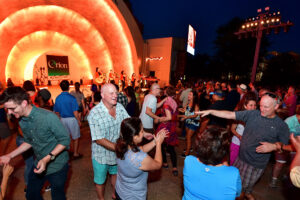 Performances at the Levitt Shell brought audiences to their feet to sing, dance and have a great time

As music is the soul of Memphis and lies at the heart of the Levitt mission, the partnership between the City, the Levitt Shell and the Levitt Foundation created a cultural anchor for accessible programming reflective of the community, ranging from popular local talent to Memphis legends such as GRAMMY®-winner Booker T. Jones to a long roster of audience favorites and celebrated musicians such as Jason Isbell, Mavis Staples and St. Paul and The Broken Bones. Throughout its partnership with the Levitt Foundation, The Shell has realized a shared vision of building community through music, creating a welcoming gathering space where more than 1 million people of all ages and backgrounds have come together to enjoy over 550 free concerts. 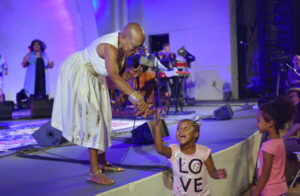 Beyond the free shows, the Levitt Shell has become a treasured hub of local pride where Memphians come together for festivals, weddings, charity events, school performances, sunrise services and other community and private events. The popular performing arts venue has also fostered local engagement through collaborations with the National Civil Rights Museum, Stax Music Academy and Memphis Public Libraries’ Five Fridays of Jazz, among others. The Shell is well positioned to become independently self-sustaining, having achieved tremendous positive impact in the community, while building a viable roadmap for its future as The Overton Park Shell.