Located on the Arkansas River and bordering Oklahoma, the diverse city of Fort Smith (population 87,891) is steeped in history that dates back to 1817, when it was first established as a frontier border town and military post about a decade after the Louisiana Purchase. The fort town continued to be used by the military throughout the next half century, and then transformed into a prosperous manufacturing hub. Rich in historic attractions like a former bordello now on the National Register of Historic Places, and the forthcoming U.S. Marshals Museum, the city nonetheless experienced hard times beginning in the 1980s and accelerating with the Great Recession of 2008, when factories and long-term industries shut down or moved oversees, hurting the local economy and the heart and soul of the community. “People have been looking for something to hold on to, for the establishment of hope in our community,” says Richardson, who noted that a quarter of the population lives below the poverty line.

Enter 64.6 Downtown, which was created in 2014 by local entrepreneur Steve Clark to lead downtown Fort Smith’s resurgence (the nonprofit is named after the number of square miles in Fort Smith). Richardson became its executive director in 2018, having served on the city’s planning commission, school board and as a development officer with the Fort Smith Housing Authority. She had also helped develop the downtown’s new Master Plan promoting sustainable growth, walkability, affordable housing and a dynamic cultural and entertainment scene. As she explains, “If we revitalize and pay close attention to the heartbeat of our downtown, then all the other ancillary parts of our community will come back together.”

During the past several years, 64.6 has made great strides in infusing Fort Smith’s downtown district with a new-found energy, attracting new businesses to the area and supporting the arts and creative placemaking, so much that in 2020 it was designated as a Main Street program by the National Main Street organization. “We’ve grown so much and we have a new history that we’re trying to share,” says Richardson. 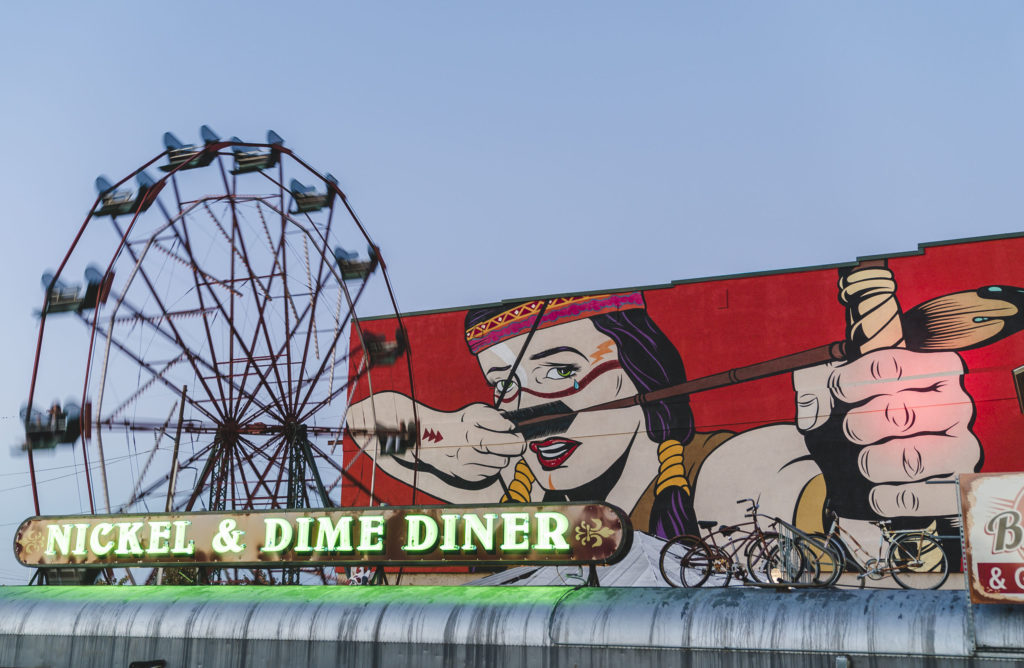 Notably, in recent years Fort Smith has become a nationally recognized city for street art, thanks to a downtown revitalization project spearheaded by 64.6’s programming of The Unexpected, a collaboration with creative house Justkids. Created in 2015 to bring urban and contemporary art to Fort Smith, today The Unexpected has 30 large-scale art installations that punctuate Fort Smith’s historic downtown featuring the work of international artists like D*Face, Guido Van Helten, Hilda Palafox and Add Fuel, with more on the way. “To bring international artists into our community was so unexpected and created such a wow factor that people who were reluctant to get on board with this type of artwork, given the city’s history, now they’re asking when the next event’s going to happen!” explains Richardson. “As one of our murals says, ‘The best is yet to come’ and we truly believe that.” 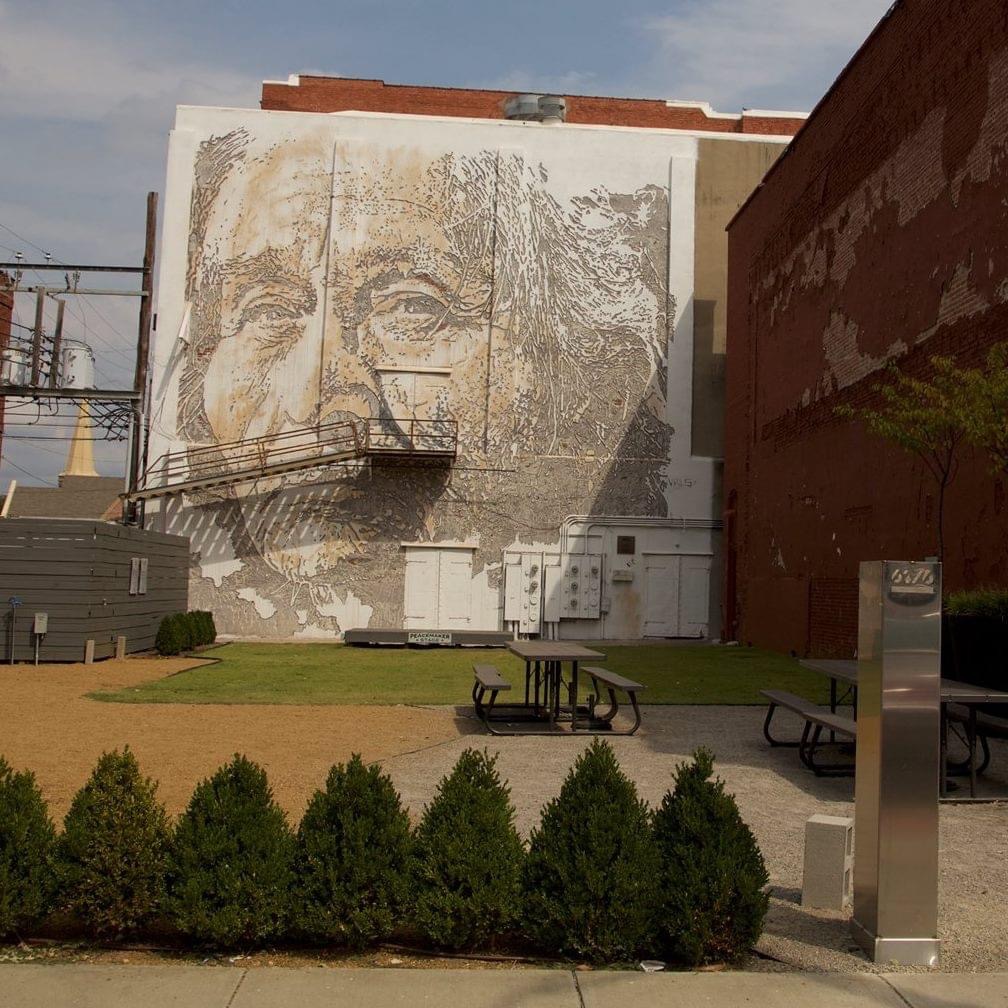 Located in a pocket park, Vhils’ Cherokee Man (2015) is based on the first known photograph of a Native American Cherokee. Photo courtesy Unexpected

She remembers when the Portuguese urban street artist Alexandre Farto, known as Vhils, came to Fort Smith in 2015 to create “Cherokee Man,” a large-scale portrait based on the first known photograph of a Native American Cherokee, which the artist carved directly onto the outdoor wall using a drill, jackhammer and chisel. While still in town, Vhils was   documented on CNN as being one of the top muralists in the world. “To have a community like Fort Smith be recognized for commissioning an artist before he blew up on the international art stage, that was an awesome experience,” she explains. “Instead of us wanting to emulate other communities, these other communities were now looking at Fort Smith, wanting to emulate us.” 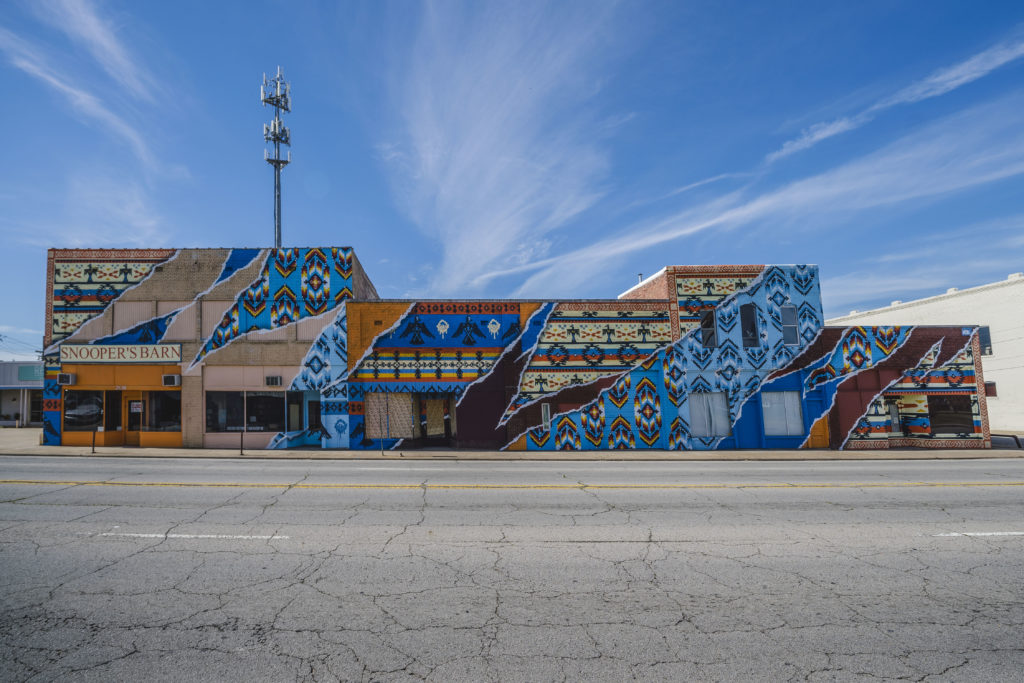 Based on the runaway success of The Unexpected, 64.6 developed a partnership with the University of Arkansas – Fort Smith to develop a mural curriculum. And last year, 64.6 brought in the classically-trained graffiti artist Yatika Fields, a Native American artist out of Oklahoma, for a week-long artist residency to collaborate with university students and the Fort Smith Symphony to create visual art inspired by Modest Mussorgsky’s 1874 musical composition, Pictures at an Exhibition. “It was great to see all of the students’ different pieces, and it was the first time that music met visual art in that type of platform here in Fort Smith,” says Richardson.

From “Not for me” to “We’ve made this happen!”
With Fort Smith’s visual art scene thriving, Richardson decided the time had come to turn her attention to nurturing the city’s music scene. So last fall, she applied for a Levitt AMP grant, hoping to build upon the city’s creative momentum. “We had seen the grant application for several years, and we were looking for the right opportunity to make our application stand out,” she explains. Richardson believed the city’s Riverfront Amphitheater along the Arkansas River would be the perfect public space for the Levitt AMP Fort Smith Music Series, given its beautiful setting and easy access to a wide range of socio-economic groups, yet lack of consistent activation. “Less than five music-related events are held there annually, all of which are paid,” she says. “Many people believe nothing ever goes on there, and that the music presented is ‘not for me.’” Richardson was determined to shift that mindset, and believed a Levitt AMP Music Series could fuel that shift.

In addition to partnering with the City of Fort Smith, 64.6 partnered with SŌL Studios, the first full-blown music studio in downtown Fort Smith, to build momentum around a redeveloping music scene. “When it comes to live music, a lot of our community supports one kind of genre – red dirt country,” says SŌL Studio owner Grant Thomas. “We were excited about the opportunity to connect with musicians from all over the world, playing all different genres, and showing the community the musical diversity that we can bring to our town while attracting a broader segment of our population to the concerts.”

Having submitted the application last fall, Richardson enlisted support to rally the community for the online public voting phase, which she says was an “important transition for the community feeling a sense of ownership towards the Levitt AMP music series, to saying ‘we’ve made this happen!’”

When the 2020 Levitt AMP winners were announced last December and Fort Smith was among five new communities to win a $25K matching grant, Richardson says the win inspired a new level of hope that engaged the whole community. As planning got underway for the 2020 season, she was working to ensure the inaugural Levitt AMP Fort Smith Music Series was as inclusive as possible, from the artist selection, to the makeup of the audience, to making sure people received that personal invitation, “whatever that looks like for them to come out and to attend,” explains Richardson. “We wanted to let everyone in Fort Smith know that their vote counted, that they made this happen, because it’s all about the community.”

Shifting priorities during COVID-19
With COVID-19 placing the inaugural season of Levitt AMP Fort Smith Music Series on hold until 2021, as well as other planned creative placemaking events around town including public art installations, 64.6 has spent the past few months regrouping and shifting priorities based on a new normal. It was just little over a year ago when Fort Smith and the surrounding communities suffered from disastrous flooding that was devastating for many families and business owners. “As soon as we bounced back from that, COVID-19 happened,” says Richardson, who added that the city is also in the midst of renewed awakening around the Black Lives Matter movement. “There have been a lot of peaceful demonstrations in support of BLM, and we’re doing our part to make sure the conversation continues,” she says.

Bringing the community together is a challenge during these socially distant times, yet fortunately, with 64.6’s partnership already in place with SŌL Studios, Richardson has access to the latest technologies as they venture into the realm of livestreaming and virtual concerts. Richardson is also planning a special music-themed event for later this summer while safely engaging the community through a Levitt AMP Bridge Grant. Until then, be sure to check out tonight’s all-new livestream featuring Allison Grace and Chris Chaney tonight at 8pm EDT/5pm PDT! 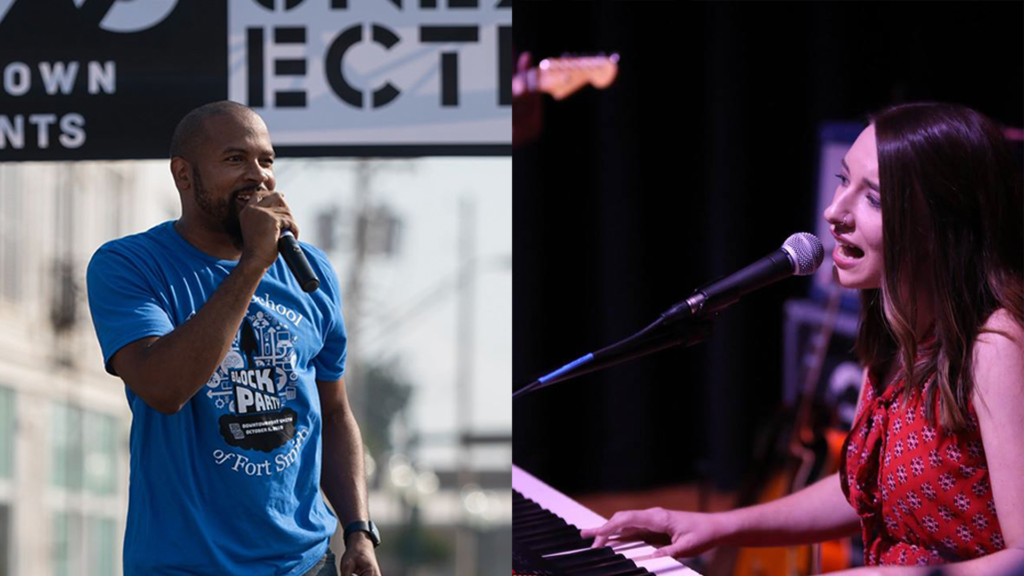