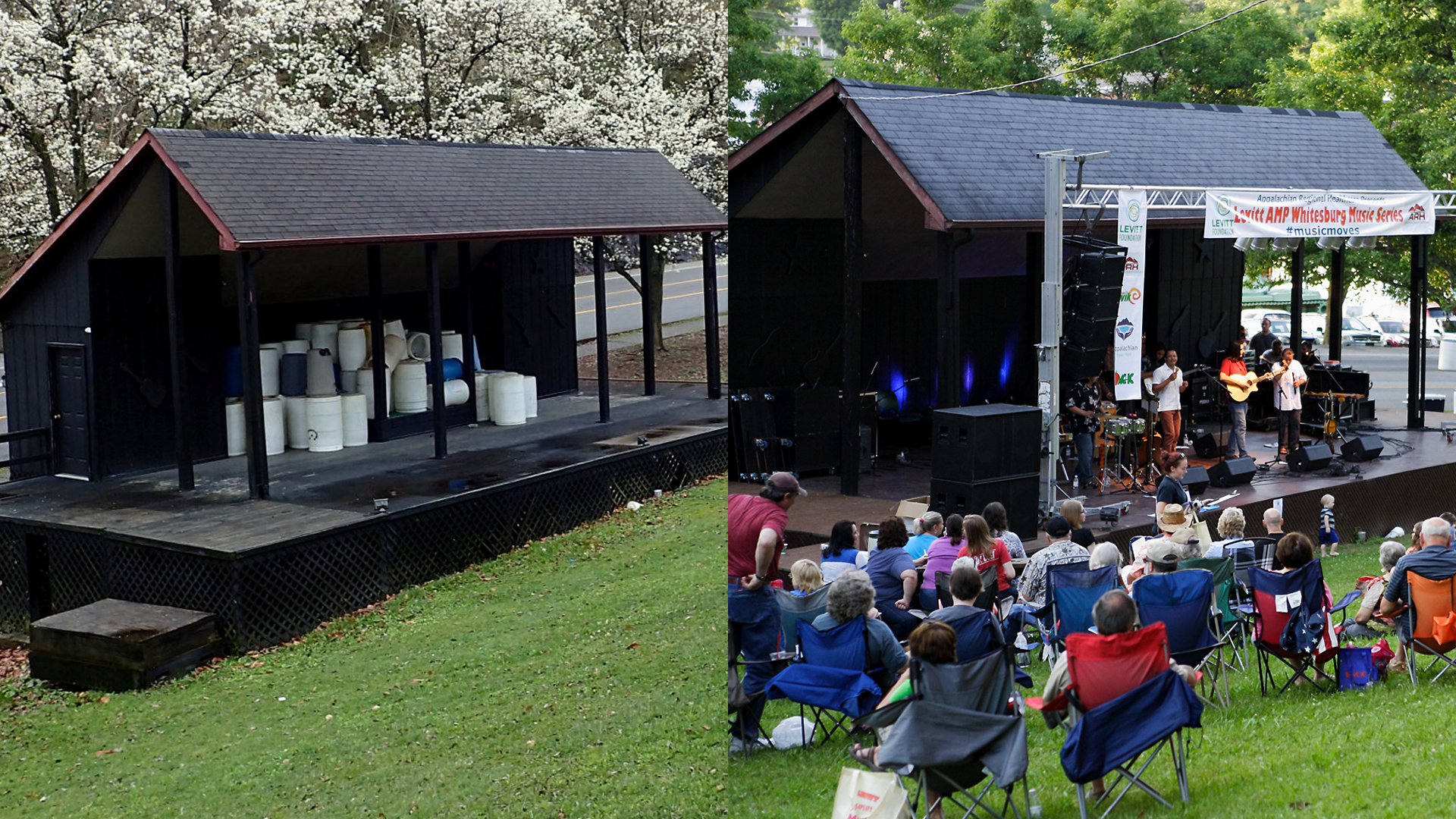 The Mountain Heritage Festival Stage, before and after the launch of the Levitt AMP Whiteburg Music Series

Tonight as part of the Levitt AMP Virtual Music Series, experience a live concert from 4-piece alt-country band Wayne Graham, broadcast straight to you from Whitesburg, Kentucky! Organized by nonprofit Cowan Community Center, the inspiring folks behind the Levitt AMP Whitesburg Music Series, tonight’s concert is happening on the ground in Whitesburg as a free drive-in show that attendees can enjoy from their vehicles while maintaining a safe social distance. Anchored by brothers Kenny and Hayden Miles, natives of Whitesburg, Wayne Graham combines country, folk, and rock & roll with traditional Appalachian music to create an eclectic sound that has earned them international recognition and acclaim. Tune into this can’t-miss show at levittamp.org/virtual tonight at 8pm ET / 5pm PT!

A region rooted in music
A rural community home to about 2,000 people, Whitesburg sits on the eastern edge of Kentucky, a mountainous span of Appalachia sometimes called the “fertile crescent of country music.” According to Steve Ruth, a co-organizer of the Levitt AMP Whitesburg Music Series, the region exports more talent to nearby Nashville than anywhere else in the country—acclaimed artists including Sturgill Simpson, Tyler Childers, and of course, Whitesburg’s own Wayne Graham, all emerged from this hotbed of arts and culture, bringing the unique sounds of Eastern Kentucky to Music City and beyond.

Like many communities in the area, Whitesburg and the rest of Letcher County have struggled economically due to the decline of the coal industry. Eastern Kentucky was also one of the first regions in the country to be affected by the opioid epidemic, with the New York Times reporting on the inchoate crisis as early as 2001. Despite these hardships, which have only been exacerbated by the COVID-19 pandemic, the community has persevered by embracing a forward-looking, entrepreneurial attitude. In addition to its many arts, cultural, and recreational amenities, Whitesburg has become known regionally for its independent restaurants, small farms, and moonshine distillery, and as Appalachia moves towards a post-coal world, the community has emerged as a leader in outlining a positive vision for the future. 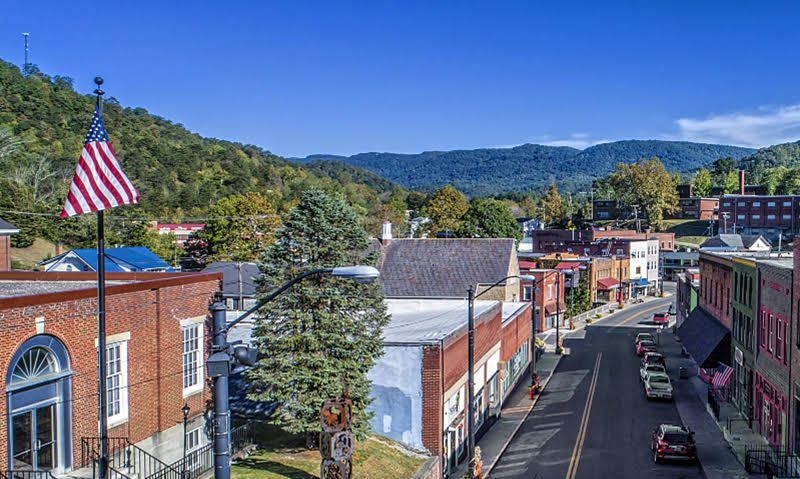 The mountain view from downtown Whitesburg

After catching wind of how a Levitt AMP grant awarded to neighboring Middlesboro, Kentucky helped foster an inclusive space for music, Valerie Horn, a program coordinator for Cowan Community Center, set out to bring a Levitt AMP series to Whitesburg and applied for the grant in 2017. In addition to revitalizing the town’s downtown core, she and other organizers hoped that a Levitt AMP series would create a place where community members could transcend ideological divides through a shared affinity for quality music. “The one thing that we all have in common in this region is that we’re a bunch of music lovers,” says Ruth.

Once a bustling railroad depot, the site chosen for the series sits at the heart of downtown Whitesburg with easy access to shops, restaurants, art galleries and the city’s farmers market. Crucially, the site is also accessible to residents of 102 public housing units in the community. During the inaugural 2018 concert season, an average of almost 400 people attended the concerts, bringing new energy and commerce into downtown Whitesburg each week.

Whitesburg is home to both extraction industries and environmental groups, and as Horn and Ruth both describe, cooperation between the two has historically been difficult. “If one outfit was putting on a concert, people from other parts of town wouldn’t show up,” says Ruth. From the outset, a goal of the Levitt AMP Whitesburg Music Series was to create a place where everyone, regardless of their affiliation, could feel welcome. By seeking a diverse range of sponsors and forging strong partnerships with organizations in the community, the series has already taken major strides towards achieving this. Sponsors of the series include the Appalachian Impact Fund, Doublekwik, and Mountain Comprehensive Health Corporation, in addition to presenting sponsor Appalachian Regional Healthcare. Horn calls the series a “unifier,” and describes groups that otherwise may not have worked together joining forces in support of the series. Ruth echoed this sentiment. “What the Levitt AMP grant has really allowed us to do is bring people together from diverse background and diverse worlds,” says Ruth. “It’s all about the music, and we couldn’t have done that without Levitt AMP.”

The Whitesburg community’s enthusiasm for Levitt AMP was on full display during the online public voting period to determine the Top 25 Levitt AMP finalists — in fact, the mayor declared a city-wide “Levitt AMP Voting Day.” The result? While competing against much larger towns and cities, Whitesburg tallied more votes than any other community, earning first place.

In addition to creating a welcoming place to celebrate music, the Levitt AMP Whitesburg Music Series has also had a positive financial impact on downtown Whitesburg. For the past two summers, the series has partnered with the city to bring in a special Thursday night farmers market to coincide with concerts, leading to record sales for local farmers. “It brings in new customers and new conversations to the market,” says Horn, describing the fun, upbeat atmosphere spurred on by the nearby entertainment.

More than just a gathering place
In addition to presenting free Levitt AMP concerts for the past two summers, Cowan Community Center provides a wide range of services and programs to the community, including a daycare, community theater, and agricultural education program that aims to address hunger in the region.

With many businesses shuttered due to COVID-19, over 800,000 Kentuckians — or two out of five of the state’s workers — have filed for unemployment since March, and Cowan Community Center has stepped up its services in response. Notably, through a partnership with CANE Kitchens (also a partner in presenting the Levitt AMP Whitesburg Music Series), the nonprofit has provided Letcher County residents with over 400,000 meal kits since May of this year, helping to ameliorate hunger among children and families during a time of scarcity. “On Monday mornings two semi trucks come in with two tractor trailers, we unload, we bag it together, and distribute it to families each week,” describes Horn. The meal kits include fruit, vegetables, bread, milk, and other essentials, and are available to anyone in the community, regardless of their income.

Though the scope and impact of Cowan Community Center’s work is broad and far-reaching, Horn says the organization “has always had a rich musical and artistic heart.” Emblematic of this is the Cowan Creek Mountain Music School, a week-long annual gathering where master musicians teach students of all ages and skill levels how to play traditional mountain music on fiddle, banjo and guitar. 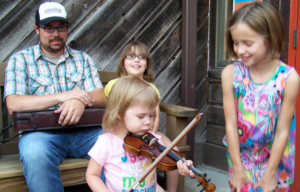 Students can also attend workshops on singing and traditional flat foot dancing. In the evening, students, instructors, and neighbors gather together for square dancing, storytelling and more. For the past two summers, the group has performed on the Levitt stage in one of the most anticipated shows of the season. This would have been the 20th year of the program, though as with the series itself, this year’s gathering has been postponed until next summer.

Although our ability to gather together has been disrupted, the Cowan Community Center and Levitt AMP Whitesburg Music Series are working harder than ever to nourish their community both literally and spiritually. Join us tonight at 8pm ET / 5pm PT to cheer them on from afar and enjoy the authentic, Appalachian alt-country of Wayne Graham as part of the Levitt AMP Virtual Music Series. Catch the show at levittamp.org/virtual!