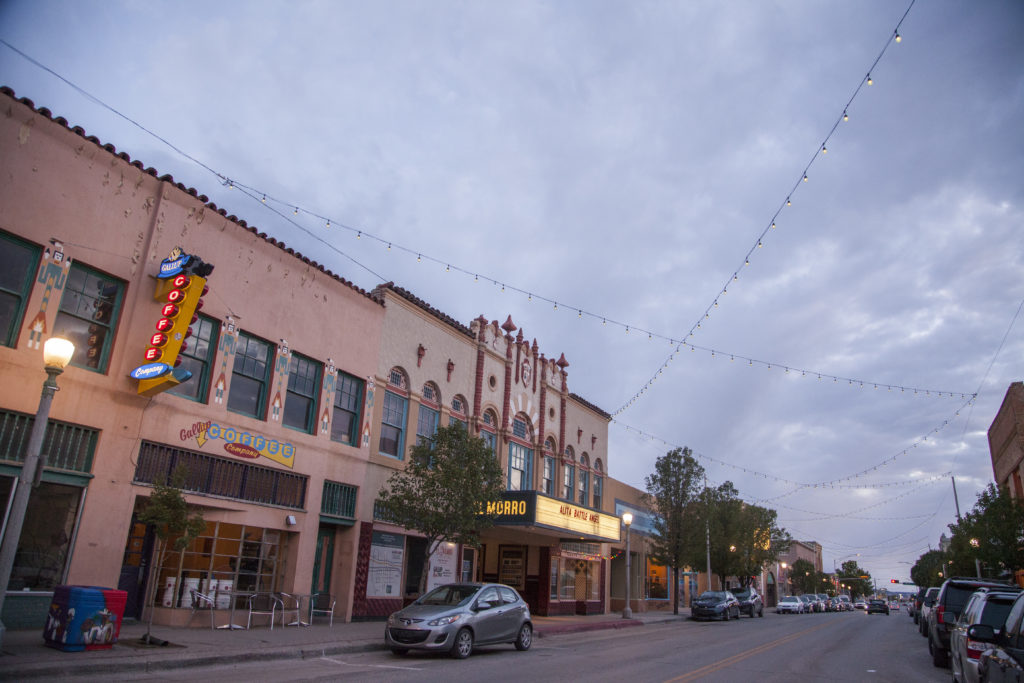 Tonight, Southwestern Blues-rocker and Navajo Nation artist Levi Platero performs an all-new livestream virtual concert as part of the Levitt AMP Virtual Music Series! Co-presented by Gallup MainStreet Arts & Cultural District, the nonprofit behind the Levitt AMP Gallup Music Series, Platero is known for his captivating guitar acrobatics and stirring blues originals. Having earned a national following, Platero has a special connection to Gallup as he was born and raised in the neighboring Navajo Nation tribal land. Be sure to tune in tonight at 8pm ET/5pm PT at http://levittamp.org/virtual!

Gateway to Native tribal lands
Located along historic Route 66 in the high desert of New Mexico next to the Arizona border, Gallup is a small town of 22,000 that’s one of the only stops for travelers driving between Flagstaff, Ariz., and Albuquerque. Surrounded by majestic terrain, red rock mesas and ample hiking, Gallup was founded in 1881 as a bustling railhead for the Atlantic and Pacific Railroads (100 trains still pass through town everyday), then became a coal mining town and later a popular film location for Hollywood Westerns in the 1940s and ‘50s. For the past 40 years, Gallup has been home to North America’s second largest hot air balloon rally each December, with thousands of people coming to watch over 200 balloons sail over red sandstone bluffs just east of town.

Perhaps most central to Gallup’s identity is the town’s high concentration of Native Americans who call the town home (nearly 40 percent of the population) and its close proximity to Native tribal lands, including the Zuni Pueblo, Hopi Reservation and expansive Navajo Nation, which spans over 27,000 square miles and is home to close to 200,000 residents. On a typical weekend, downtown Gallup welcomes an influx of tribal neighbors who rely on the town for their retail and shopping needs. And each August, Native Americans from across the United States gather in Gallup for the massive Inter-tribal Ceremonial, featuring Pow Wow competitions, parades, rodeos and Native American arts and culture.

While rich in natural beauty and Native arts traditions, Gallup has nevertheless experienced its share of challenges due to persistent high poverty, affecting the overall morale of the community. “There’s diverging interpretations of our downtown, in terms of safety and things to do,” says Smith, who noted that many of its historic buildings are in need of repair. Improving quality of life has been one of the top priorities for Smith, who moved to Gallup from California in early 2019 to lead Gallup MainStreet. As she’s gotten to know the community, Smith sees much potential to leverage the benefits of small town living for positive change, especially in Gallup’s historic downtown.  “There’s so much potential here, and a lot of opportunity to be heard. When you identify a challenge, you have access to your leaders and can get people together in a room,” she says.

Infrastructure improvements are often the first step in bolstering community pride, and an exciting example of the community-driven change taking root in Gallup is “Coal Avenue Commons,” a downtown infrastructure revitalization project that will transform two blocks of Gallup’s main downtown thoroughfare, Coal Avenue, into a more walkable and welcoming “plaza street.” Years in the making, the project broke ground earlier this month and is the realization of multiple partners coming together, including the city, local nonprofits, and the community at large to determine the plaza street’s design, thanks to an “Our Town” grant from the National Endowment of the Arts. “Coal Avenue Commons is a great example of the community coming together through creative placemaking,” according to Smith. “Everyone gave their input, we held charettes over multiple days, it was so exciting.” 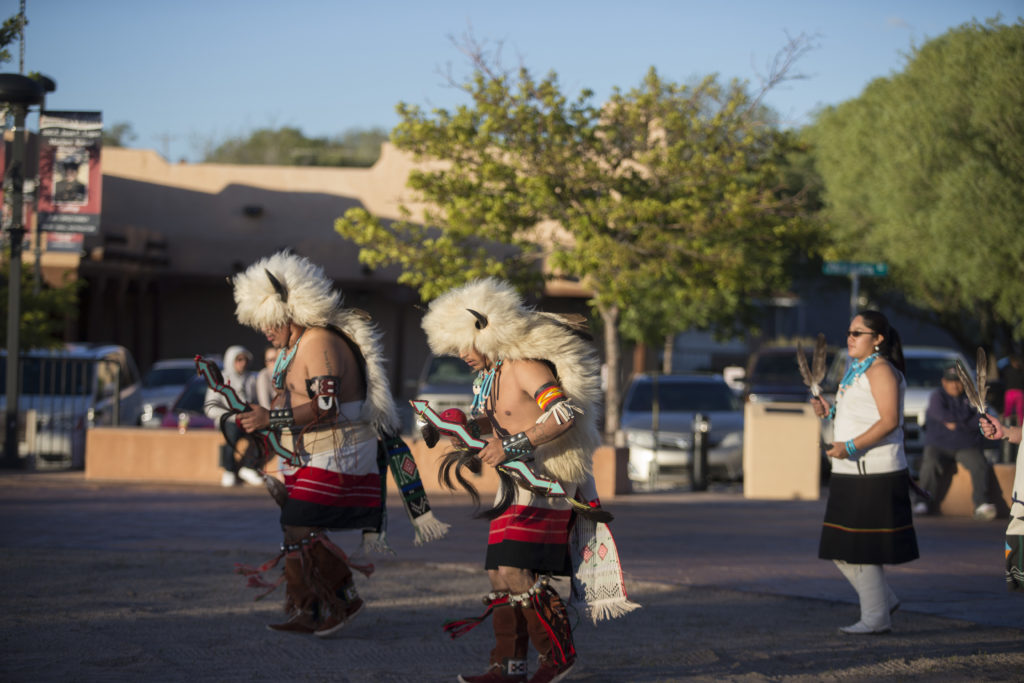 Creating ‘moments’ through Levitt AMP
With Coal Avenue Commons becoming a reality, the hope is that the project will inspire additional downtown revitalization beyond the two blocks. Already Smith has commissioned local artists to create two new murals in downtown alleys once filled with dust and dirt, beautifying the now-paved thoroughfares that have pedestrian appeal.  Just a few blocks away lies Courthouse Square, a largely underused yet centrally located public space that is home to nightly Native American dance performances during the summer yet not much else throughout the rest of the year. The Square, with its beautifully restored Adobe building serving as a backdrop and its proximity to the new Commons, is prime for consistent activation that would truly transform it into an outdoor living room for the entire town. 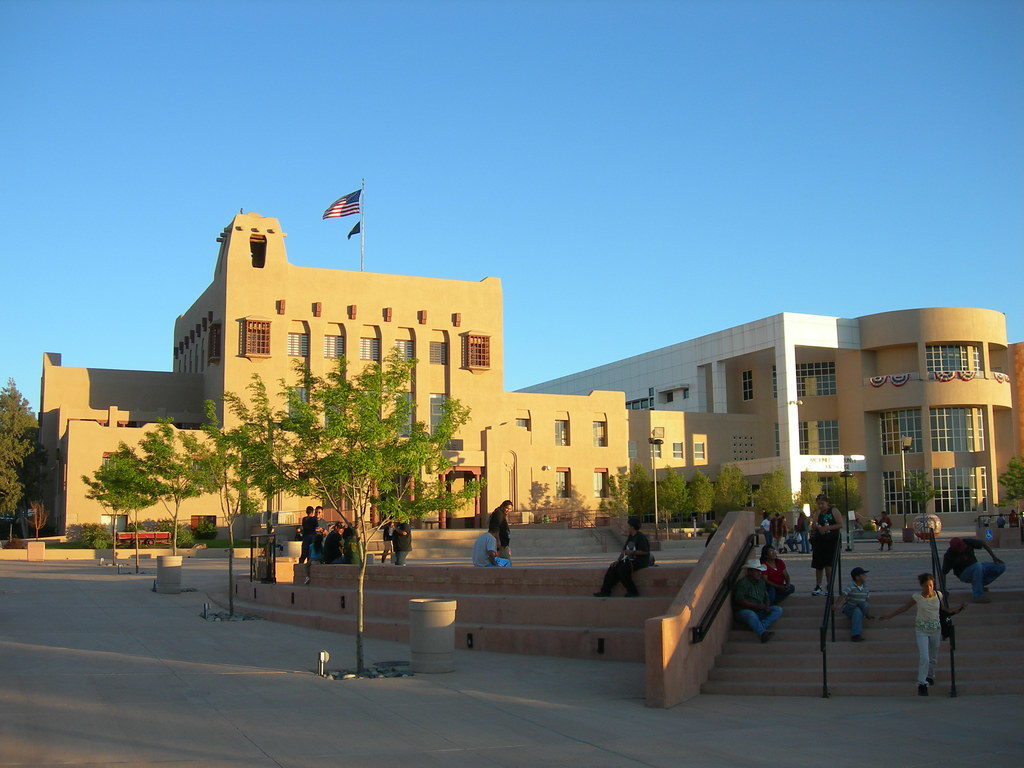 Having learned of the Levitt AMP grant opportunity in 2019 from Gallup’s city manager, Smith believed a free, outdoor music series featuring acclaimed artists in a range of music genres could be just the thing to bring Courthouse Square to life, while also adding to the positive momentum brewing downtown. “I immediately sensed that a Levitt AMP Music Series would be a great way to bring different types of people together,” she says. “We’ve been struggling. There aren’t these moments, especially downtown, to bring everyone together. For such an artistic place, there’s not much music. So I thought a free concert series could hit positive notes from a lot of angles, while being a community healing moment.”

Smith also recognized Levitt AMP’s potential to serve as a bridge from Gallup’s municipal area to downtown. While Courthouse Square is only a few blocks away from the downtown, Smith says there is a disconnect and a feeling of “not being close to one another.” Levitt AMP would help create that connection, giving people a reason to venture into the area and jumpstart dialogue about what else could be done to add vitality to Gallup’s downtown and the surrounding neighborhoods.

Beyond boosting civic pride among locals, Smith also believed a Levitt AMP Music Series would elevate Gallup’s reputation outside the town limits, with musicians coming to perform from across the region and country. “We don’t get a chance to bring artists to Gallup very often, so I loved the idea that they would go back home with their band and tell people ‘Gallup is cool!’ For a small town that sometimes struggles with its image, that would be a great thing.”

COVID shift
Last December, hopes were high following news that Gallup had won a $25K matching grant to bring free Levitt AMP concerts to Courthouse Square in 2020. Just a few months later, the COVID-19 pandemic struck Gallup hard; at one point, the town reported the highest per capita rate of infections in the West, and the neighboring Navajo Nation was a hotspot, reflecting the Native population’s limited access to healthcare and critical services. Yet the Gallup community has also shown their resilience and determination to come together and heal. While the Levitt AMP Gallup Music Series has been postponed until 2021, Gallup MainStreet has focused its efforts on providing support to the small family-run businesses in its district, from offering micro grants to hosting technical assistance webinars to capacity-building boot camps for entrepreneurs, artists and businesses. 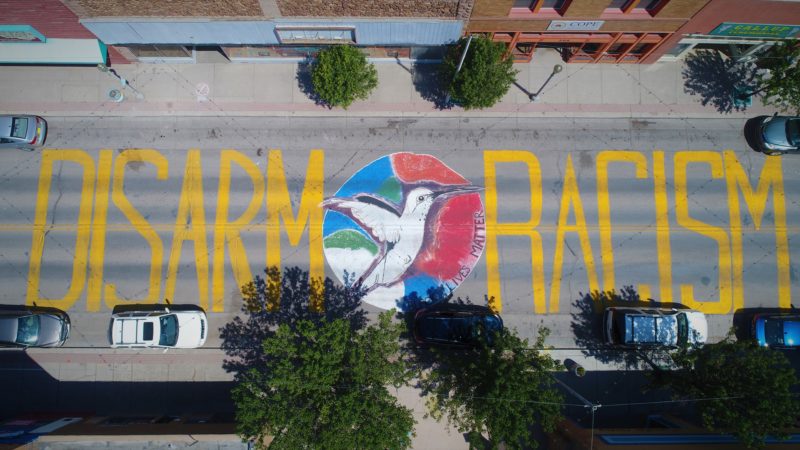 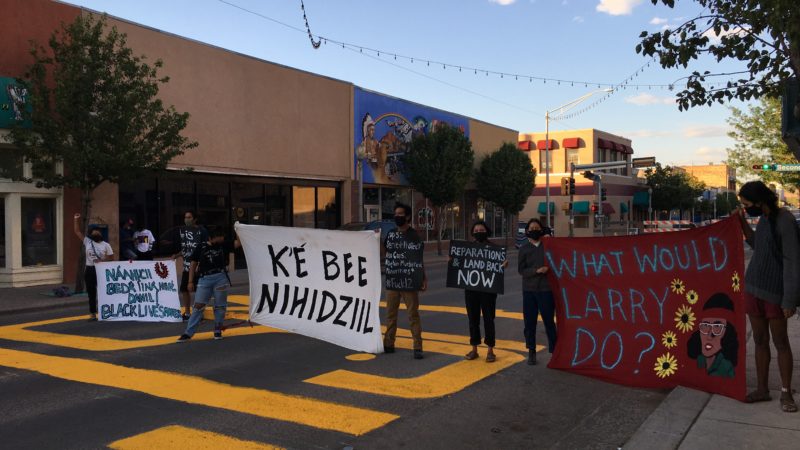 Last month, to commemorate Juneteenth and show solidarity for Black Lives Matter, a group of community members, volunteers and activists came together (albeit in a socially distanced manner) to create a block-long mural on Coal Avenue proclaiming “Disarm Racism.” Sponsored by Gallup MainStreet and the City and designed by Navajo painter Jerry Brown, the mural featured a hummingbird in the middle—a symbol of healing among Native Americans—and was in a variety of languages to reflect the rich cultural diversity of the region. “It was an important moment for the community,” says Smith.

The groundbreaking of Coal Avenue Commons earlier this month was another hopeful moment during these challenging times. “It was a very positive thing for the community to launch the infrastructure revitalization project, especially during COVID, offering a sign of better things to come.” 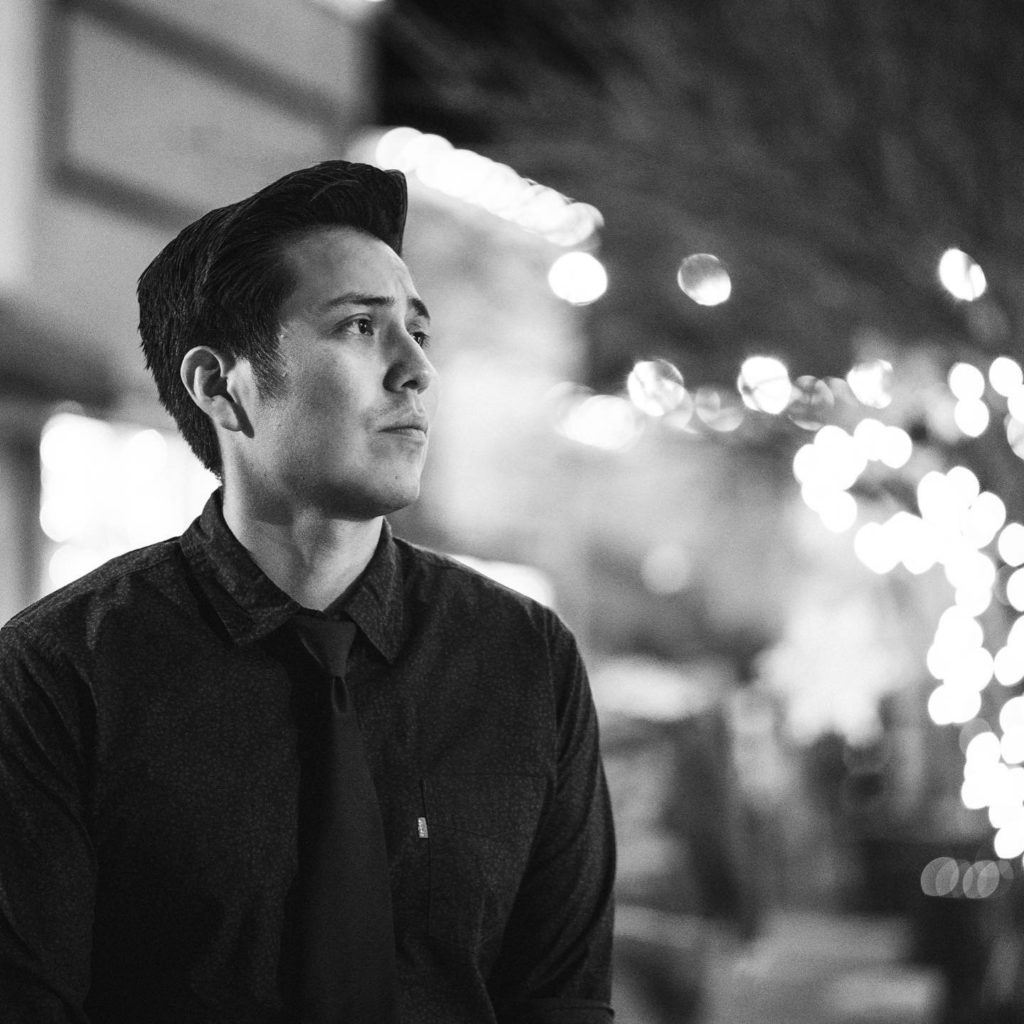 ith and community members are eagerly looking forward to next summer’s Levitt AMP Gallup Music Series as an opportunity to bring people together of all backgrounds and inject “straight up joy” in their lives, creating pride of place and space for healing. Until then, be sure to experience the incredible talent of Southwestern blues artist Levi Platero during tonight’s livestream virtual concert at http://levittamp.org/virtual!