Keith Grimwood and Ezra Idlet are no strangers to Levitt stages.

As Trout Fishing in America (TFIA), the duo has performed at Levitt Arlington (2013, 2010), Levitt Shell Memphis (2011) and Levitt Westport (2011), and they’ll be adding Levitt SteelStacks to the list when they bring their family-friendly folk-rock show to the Lehigh Valley this Saturday at 7:30 p.m.

Get to know the band before they take the stage with some fun TFIA trivia! 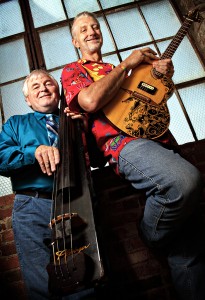 Look forward to a free, family-friendly show that’s fun for all ages this Saturday at Levitt SteelStacks at 7:30 p.m.! Also check out the other free shows happening in Anchorage, Arlington, Denison and Memphis this weekend. Be sure to check with your local Levitt for the latest concert info, including updates due to weather.