“Just being exposed to so much music at such a young age…music found me rather than me finding music.” —Salvador Santana

In Salvador Santana’s case, it’s all in the family.

As the son of legendary guitarist Carlos Santana and grandson of blues pioneer Saunders King and internationally celebrated violinist and mariachi bandleader Jose Santana, it’s safe to say that Salvador grew up with strong musical roots.

Learn more about the talented keyboardist and his musical family before he opens the concert season at Levitt Pavilion Los Angeles this Saturday!

A family of musicians

Salvador has been creating music with his father, Carlos, since the the age of three—when he would sit in front of a drum set on his father’s lap playing the snare and tom while his father covered the hi-hat and kick drum.

Their collaborations have come quite a way since then. As a high school student, Salvador worked with his father to write the song, “El Farol” (“The Light”) for the album Supernatural, which went on to win nine GRAMMY awards in 1999 including “Album of the Year” and “Best Rock Album.” They continue to create music together, with projects such as “Me, Myself and I,” a song written in 2013 to raise awareness for the National Dating Violence Awareness Campaign.

Salvador’s father, Carlos, looked up to this rhythm and blues pioneer long before marrying King’s daughter, Deborah. Carlos has credited his former father-in-law as the source of inspiration for his early idol, B.B. King. Salvador also names his maternal grandfather as a major influence. 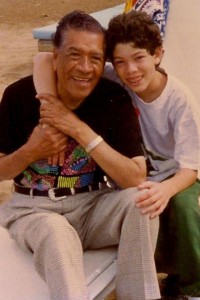 Dedicating “El Farol” to his grandfather was only a small token of Salvador’s gratitude towards the strong impact Jose made on his life. Just as Salvador’s father gave him firsthand opportunities to perform with musical greats, Jose showed his son Carlos the same kindness. Salvador recognizes what a huge inspiration Jose was for both his father and himself.

In a recent interview, Salvador expressed his gratitude for his rich musical heritage, saying, “I’m honored to share this incredible lineage and to continue the legacy.”

Carving out his own place

Though Carlos introduced the guitar to his son at an early age, it wasn’t until Salvador discovered the piano around the age of seven that he fell in love with music making. In a recent interview, Salvador explained his early affinity for the instrument saying, “It just spoke to me, it made sense to me.”

He continued his studies at the renowned California Institute of the Arts and committed himself to a career in music because he wanted to be a musician—not because he had to follow in his father’s —or grandfathers’—footsteps.

Salvador’s 2013 song “Rise Up”—featured on the award winning film School of My Dreams—embodies his commitment to bringing listeners positive and uplifting messages through his driving rhythms, poetic lyrics and inspiring piano riffs.

On his website he states, “The main ingredient to my inspiration and creative drive is joy. I want to use music in a positive way and give back to people in need. There can never be enough people who do that.”

Experience Salvador Santana live at the season opening of Levitt Los Angeles this Saturday, June 6! Also check out the additional free Levitt shows happening as part of the Levitt AMP Anchorage and Denison Music Series and at Levitt Arlington, Levitt Shell Memphis and Levitt SteelStacks. We’ll see you on the lawn!