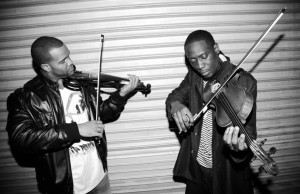 Black Violin is made up of the immensely talented, classically-trained Wil Baptiste (viola and vocals) and Kevin “Kev Marcus” Sylvester (violin), who struck up a friendship in the orchestra as hip-hop loving high school students at Dillard Performing Arts School in South Florida. Following college graduation in 2003, the two friends reunited and dabbled as hip-hop producers in the Miami area, creating infectious beats. Yet, time and again, Wil and Kev noticed that they stopped rappers in their tracks when they took out their string instruments and played over the beats in the studio, strumming their violins like guitars or using distortion for a pulsating rock sound. The consistently glowing reactions got them thinking they were on to something; soon they began writing music that put their fiddles front and center and that reflected the melting pot of musical influences they grew up with—everything from classical, hip-hop and R&B to soul and rock, even klezmer.

They named themselves Black Violin, in honor of a 1965 album title of the same name by Stuff Smith, an African American jazz violinist Kev discovered in college. “I was just blown away the first time Kev played Smith for me,” says Wil during a recent interview. “The way Smith played was so unique,” referring to Smith’s trailblazing use of electrical amplification. Kev agrees, saying, “It sounded like Smith was on fire, he was playing with so much soul. I never heard a violin being played that way before.”

Rising stars
Early in their career, Black Violin had to prove themselves, especially when they tried to book gigs at places like nightclubs. “Club promoters initially were reluctant about booking two black violinists for a dance club, as you can imagine,” recalls Wil. “So one night, we went ahead and started playing on the sidewalk in front of this one club. The promoter came outside and was like, ‘Yeah! I want that!’” From that night on, Wil and Kev became regular performers at clubs along Miami’s South Beach.

Buzz about Black Violin’s awe-inspiring performances was spreading, yet the real turning point came in 2005, when the duo won New York’s famed televised amateur night talent competition at the Apollo Theater. Known for being a place “where stars are born and legends are made,” (the careers of James Brown, Gladys Knight, Michael Jackson and many others were launched there), Apollo’s amateur night is also known for its raucously opinionated, sold out crowds who make their pleasure or displeasure known through thunderous applause or by booing artists off the stage. Kev and Wil not only survived week after week of the competition, they wound up cinching the Legend Title. “At that moment, we realized we had something special,” says Wil. “It was nerve-wracking before each performance, but when we were on stage we felt that the audience was with us, and it was just exhilarating.”

In addition to winning the $20,000 prize accompanying their Legend Title, their success at the Apollo sent Black Violin’s career in motion at full speed. Two weeks later, they performed live with Alicia Keys at the Billboard Awards. From there, invitations followed to perform alongside musicians like Linkin’ Park and Diddy. Black Violin released their first album in 2007, and soon they were traveling around the world opening shows for the likes of Kanye West, 50 Cent, Akon and Jay-Z, performing at the Super Bowl and US Open, and recording their own music videos.

During the past few years, Wil began adding vocals to Black Violin songs, adding a new dimension (“an upper cut” says Wil) to Black Violin’s instrumental sound. Last year, Black Violin was signed to Universal Music Classics, their first major recording deal, and they are currently working on their next album, which is due out next summer as the Levitt National Tour reaches a Levitt venue near you.

Wil expressed their mutual excitement to headline the 2015 Levitt National Tour. He recalled their amazing experience performing at Levitt SteelStacks in 2014: “We loved performing outside and knowing that it was a free concert for everyone,” he says. “Particularly as classical music is fading away in a lot of places, and people don’t know how to react during a typical classical concert, to see everyone get up and dance was fantastic.”

In addition to the free concerts and outreach activities in Levitt cities, Black Violin will visit local area schools and perform for students, part of their commitment to reach 50,000 children each year. “The outreach we do, we hold this very close to their hearts,” says Wil. “Across the country, schools are cutting arts programs, in particular strings, and we’re trying to raise awareness on their importance. When the kids see our show, they go crazy, jumping up for joy and dancing the entire time! And after the show, while we still have their attention, we explain that we’re not just there to motivate them to play violin, or to bridge the gap between traditional and contemporary music—we’re hoping to motivate kids to think outside the box, to do something special, whether or not that has to do with music,” said Wil.