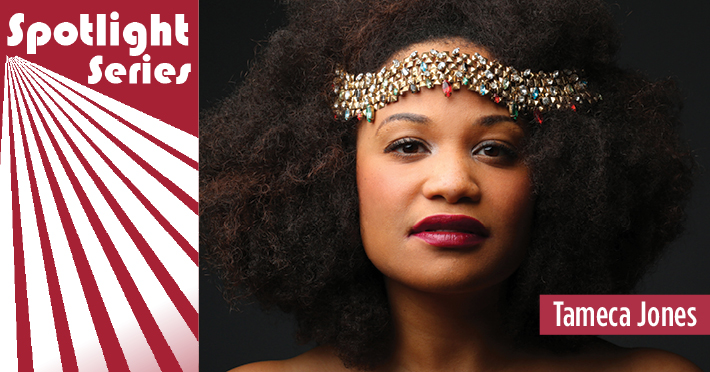 This week, we’re turning our Spotlight series to Tameca Jones, a Texas-based sensation who will be hitting the stage this Sunday (6/16) for the Levitt AMP Galva Music Series! You’ll also be able to catch Tameca next week for a Levitt AMP show in Green Bay (6/18), and later this summer at Levitt AMP sites in Springfield (7/4) and Trenton (8/8).

Tameca Jones has been wowing audiences with her honey-sweet voice since 2005, when she stormed into the Austin music scene as the frontwoman of the band 8 Million Stories. When the band dissolved two and a half years later, Jones struck out as a solo act, and has attracted critical acclaim in Texas and beyond ever since. She’s been featured in Rolling Stone, Billboard and NPR, opened for legendary artists like BB King and Willie Nelson, and played major festival gigs at SXSW and Austin City Limits.

Although locals know her as “the queen of Austin soul,” Jones’ music spans the genres and defies a label. She draws on pop, R&B, Motown, and rock and roll influences to create entirely new sounds, breathing life into each groove with her soaring vocal melodies. As a lyricist, Jones is intimate and vulnerable, unafraid to sing about her desires, fears, and needs. Her debut EP, Naked, features songs about burning crushes and devastating heartbreaks, and concludes with a hot and heavy cover of Elton John’s song “Benny and the Jets.”

2018 was a hallmark year for Jones, and after hitting the road with the blazing hot guitar guru Gary Clark Jr. (a fellow Austinite and longtime fan of her music as well as a past Levitt performer), Jones performed for a national audience at the 2018 NFL draft and later took home the title of Best Female Vocalist at the Austin Music Awards. This summer, Jones is bringing her momentum to the Midwest and East Coast – don’t miss the chance to hear her sweet Texas sounds!