Sounds, colors and people fill a Levitt lawn, infusing a palpable energy into an underused public space. More and more, public art—whether it’s a temporary installation, a permanent mural, or an interactive sculpture, to name a few—is becoming part of the Levitt experience across the country. Below are some of the exciting ways Levitt communities have embraced the multidimensional power of the arts in public spaces.

Music for your ears (and eyes!)

Take the stainless steel sculpture in the plaza surrounding Levitt Pavilion Denver. Nick Guerts and Ryan Elmendorf’s interactive “Sky Song” invites concertgoers to create their own musical composition on the eight-foot piece’s 33 buttons—with their creation displayed in lights 30-feet away on the Levitt venue’s facade. As Levitt Denver Executive Director Chris Zacher explained, “It allows musicians and non-musicians to physically play our building…Something this beautiful works in many mediums of art at the same time.” 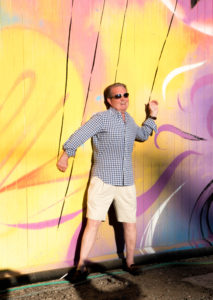 While listening to the eclectic sounds of the Levitt AMP Carson City Music Series in Nevada, concertgoers are invited to grab hold of oversized marionette strings and become part of  Bryce Chisholm’s colorful mural. Seeing the Brewery Arts Center continually bring people together through innovative arts programming, the Downtown Visitor’s Association found King Street—where Levitt Carson City takes place—to be the ideal spot for the city’s latest mural. Energetic hues depict a young girl holding a marionette and blowing a dandelion made of music notes into the night.

Walking to a Levitt AMP concert through downtown Denison, Texas, takes concertgoers on a musical journey before they even reach Heritage Park’s lawn. Music-themed art creates unexpected fun in the area surrounding Levitt AMP Denison—from Main Street’s plethora of interactive musical sculptures (including a new eighth note bike rack!), to the colorful streetscape project that transformed a sidewalk crossing into a life-size keyboard painting, to the photo op with a larger-than-life guitar that intrigues passersby of all ages.

Providing a unique gateway to the Levitt Shell in Memphis, a colossal 24-by-68 foot steel guitar silhouette echoes the curve of the venue’s WPA-era bandshell. Christopher Fennell, the artist behind “Steel Guitar” explained, “It is the symbol of what the Shell is—a place for the community to come together and enjoy music.” With community and music at the core, Fennell’s piece echoes the very mission of the Levitt Shell. It plays off the historic venue’s prominence in Memphis’ music community and the legendary musicians who’ve share their talents on its stage—including Elvis Presley. Anne Pitts, Levitt Shell’s executive director, commended the piece’s seamless fit into its environment, saying “The guitar perfectly marries the urban, musical culture of Memphis and the natural setting of Overton Park.”

Surrounded by striking blue-painted trees and a collection of outdoor sculptures—Levitt AMP Chattanooga concertgoers were enveloped by sound and color on the Bessie Smith Cultural Center lawn. Like ‘The Bessie’ itself, the art sitting on the front lawn commemorates the area’s rich cultural legacy. Located in what was once considered Chattanooga’s famed 9th Street District or ‘The Big Nine,’ the lawn sculptures portray struggle, hope, strength, jazz and faith—celebrating the area’s vibrant history as a center for African American community life. And as Katelyn Kirin, director of Public Art Chattanooga noted, they also represent the “hope that can be found in transformation and renewal.”

Across the country, engaging public art is energizing outdoor Levitt concerts with even more creativity. The result? Multidimensional experiences that are ripe for participation and discovery.

A public art-making project collided with civic engagement in rural Kentucky when Levitt AMP Berea concertgoers took to the street adjacent to the concert site to paint “Can Houses” in support of Habitat for Humanity. Brightly colored paints were applied to large white panels that were then assembled into “Houses” and placed around the county. Proceeds from cans collected in these vibrant recycling “Houses” supported local housing efforts. Levitt AMP Berea Coordinator Ali Blair explained that “sharing an art-making experience helps to connect and find common ground.” 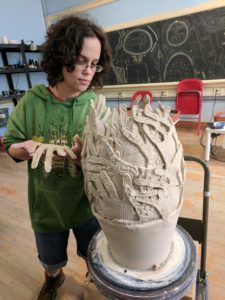 In upstate New York, concertgoers of all ages and backgrounds found common ground ‘lending a hand’ to a vase-making project on the Levitt AMP Utica lawn. With free, live music in the background, concertgoers stepped up one at a time to have their hand traced into patterned clay. More than 100 hand tracings of all sizes were collected and shaped into a large, stunning vase by local ceramist Vartan Poghosian, later revealed to the public at the final 2017 Levitt AMP concert. With almost one-fifth of Utica’s population hailing from another country, the vase symbolizes Utica’s strength through diversity. Levitt AMP Utica’s Michelle Truett explained how the beauty of gathering such a wide range of people on the Levitt AMP lawn transformed into the community-driven piece. She noted that, “showing how all of those hands can come together to be this beautiful piece of art very much mimics Utica.”

Exploring the 150-acre pet-friendly grounds of Dog Mountain in Vermont—home to Levitt AMP St. Johnsbury—visitors come across sculptures ranging from a winged dog over the site’s renown dog chapel, to a giant blue sparrow in a tree, to white picket fence newel posts carved into dogs. In addition to coming to know and recognize Dog Mountain as a remarkable local asset, Jody Fried, Catamount Arts executive director, explained that the unique setting “…introduces big groups of people, diverse sectors and age ranges, to public art in a way that’s not intimidating or static. They discover it, they come back to it, they get to know it, and that’s how they come to appreciate and own it. It belongs to them. And they take pride in that.”

Art in its simplest form is communication. Whether it’s an installation or a free Levitt concert, art in public spaces sends messages about what’s important to communities. And across the country, communities have turned to public art to celebrate the stories that have built their core identities and envision their future. 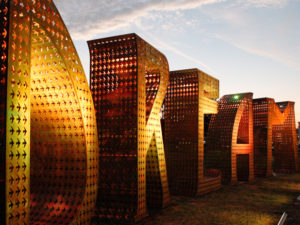 Near Levitt Pavilion Arlington in Texas, concertgoers pass two public art pieces that embody Arlington’s identity as “The American Dream City.” First, Jeff Schonberg and Laura Kimpton’s towering, three-ton DREAM sculpture—12-foot metal letters perforated with 17,400 soaring-bird cutouts—reminds viewers to dream. Half a block away, audiences are met by a colorful six-foot fiberglass star, created by Canvas by Canvas as part of the Star of Texas public art project. It’s fitting that this particular star would welcome visitors to Levitt Arlington, as its vibrant kaleidoscope-like appearance speaks to Arlington’s diverse communities coming together. As Canvas by Canvas explained, “You look at the star and then you look at Arlington—there is the unity even though we are differentiated.”

When its memorializing flame is lit each evening, artist Elena Colombo’s massive fire and steel sculpture at the SteelStacks Arts and Cultural Campus in Bethlehem, Pa.,—home to Levitt Pavilion SteelStacks—celebrates the region’s prosperity and contributions to the nation. Adjacent to the Levitt lawn at the base of the iconic blast furnaces of former steel industry giant Bethlehem Steel, “The Bridge” is steeped in local history. The piece’s 35-ton steel arch is inscribed with the names of buildings and bridges made with Bethlehem Steel, accentuated by its gas-lit blue flame, commemorating the former Bethlehem Steel flame. In conceptualizing this site-specific NEA-supported piece, Julie Benjamin, executive director of Levitt SteelStacks, explained they wanted to “create a public art piece that would stand as a symbol of our community’s past and ability to adapt and embrace a new future on the former industrial site.”

Art—in all its forms—helps turn places where people live into places that people love. Like the Levitt program, the public art projects above position arts access, place and community at their core. They’ve inspired people to gather and enjoy a communal arts experience, invigorating a local public space in the process. When layered with other community-driven efforts, public art is a powerful vehicle to deepen our connections with one another and to our shared past, present and future.