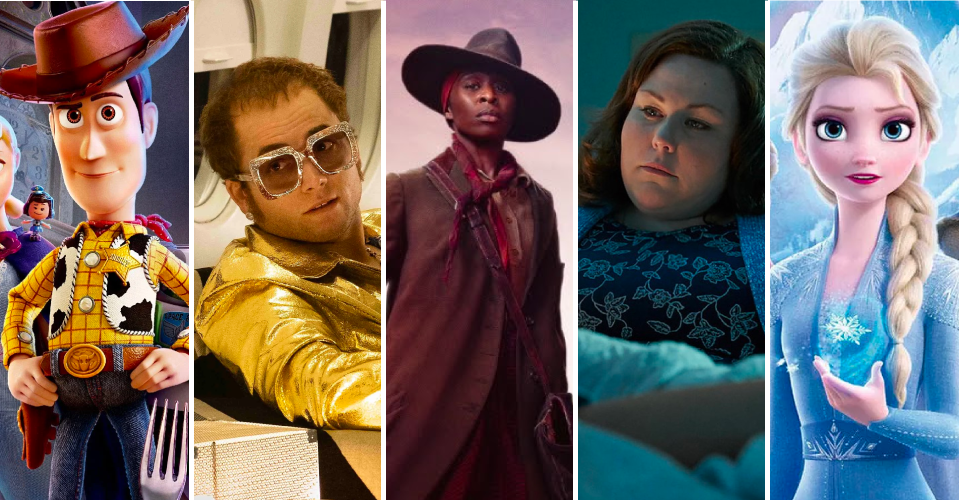 “I Can’t Let You Throw Yourself Away” — Toy Story 4

Randy Newman’s music has been at the emotional heart of Pixar’s Toy Story franchise since 1996, with “You’ve Got a Friend in Me” bringing generations of viewers together as the de-facto theme song for Woody and company. Newman has picked up Academy Award nominations for his work on each of the three previous Toy Story installments, and took home the prize for his song “We Belong Together” for Toy Story 3 in 2011.

Rocketman not only chronicles the career of legendary pop star Sir Elton John, but continues it with the inclusion of brand new music from the artist himself. “(I’m Gonna) Love Me Again” is a power-pop duet for the ages that also features vocals from the singer’s on-screen embodiment, Taron Egerton. Elton John is a contender for Best Original Song for the first time since 1995, when he hauled in three nominations for his work on the Lion King soundtrack and won the award with “Can You Feel the Love Tonight.”

“I’m Standing With You” — Breakthrough

Performed by Chrissy Metz; music and lyric by Diane Warren

Diane Warren is one of the most prolific pop songwriters in the industry, and the uplifting, gospel-inspired track she penned for Breakthrough scored her an 11th Academy Award nomination for Best Original Song. Despite earning her first shot at the prize all the way back in 1988, Warren has yet to leave Oscar Night with a golden statue in tow — will this be the year that changes?

Performed by Idina Menzel and AURORA; music and lyric by Kristen Anderson-Lopez and Robert Lopez

Idina Menzel’s voice soars to impossible new heights on “Into the Unknown,” the anthemic musical centerpiece of Disney’s Frozen 2. The inaugural Frozen film spawned the infectious “Let It Go,” also performed by Menzel and penned by the same duo, which took the prize for Best Original Song in 2013 and was stuck in countless heads around the world for years to come.

Most of the Oscar buzz surrounding Cynthia Erivo stems from her hallmark nomination for Best Actress in a Leading Role, but the versatile performer and singer is also up for an award in the musical arena. Over the course of the epic 5-minute track “Stand Up,” Erivo’s voice swells from a low rumble to an unstoppable force backed by a chorus of other singers.