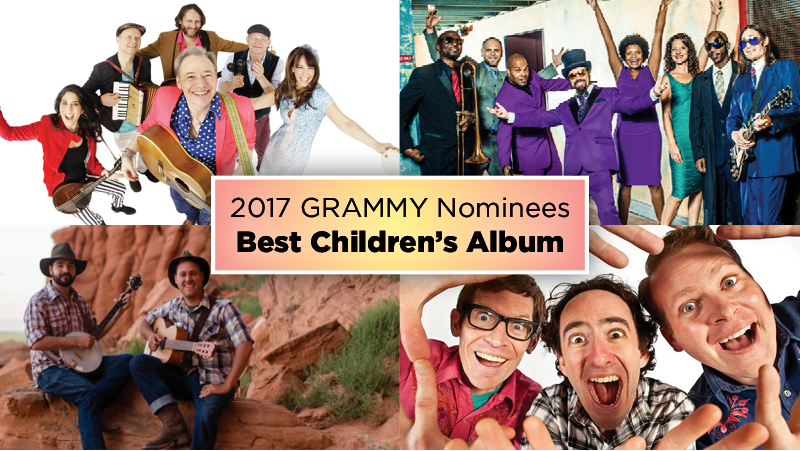 We’ve got plenty of reasons to be excited about this Sunday’s GRAMMY Award Ceremony—25, to be exact! That’s right, 25 Levitt artists were nominated for a 2017 GRAMMY Award, and taking a closer look at the categories, you may notice that four of these artists share nominations for Best Children’s Album. That’s four out of five of that category’s nominees!

While the annual GRAMMY Ceremony is televised every year, viewers only get a glimpse of the entire evening, which means we don’t get to hear award acceptance speeches for most categories. So you may not have known about the Best Children’s Album GRAMMY, but you almost certainly have heard of its some past winners, including Pete Seeger, Michael Jackson, John Denver and Ziggy Marley. One of this year’s nominees, The Okee Dokee Brothers (Levitt Pavilion Westport 2015), already follow in the footsteps of these acclaimed musicians with their 2013 GRAMMY win. The rest of the 2017 nominees—Recess Monkey (Levitt Pavilion Westport 2012), Brady Rymer And The Little Band That Could (Levitt Pavilion Westport 2012, 2014) and Secret Agent 23 Skidoo (Levitt Pavilion Arlington 2016)—will soon find out if they will join the highly selective GRAMMY Award winners roster.

Many permanent Levitt venues present high caliber children’s artists during the free concert seasons, and we’re thrilled that the Recording Academy has recognized the talents of these music-makers! Levitt concerts bring live music outdoors for people of all ages to enjoy, including the youngest of audience members who love to dance and run around Levitt lawns. Levitt children’s shows span a variety of genres—from hip hop to rock, from bluegrass to funk—exposing families to new music and also catering songs to kids so they can sing along and even learn new vocabulary. Together with San Francisco-based kindie musician Frances England, this year’s Best Children’s Music Album nominations are especially significant with all five nominees being independent artists.

This Saturday, these nominees will also play the Children’s Recording Arts Alliance’s eighth annual charity concert at Lucky Strike Live in Hollywood. Tickets are still available for $15 online and $20 at the door. Proceeds benefit the Symphonic Jazz Orchestra, which brings artist residencies to over 3,600 students in Los Angeles County. “This [concert] is going to be like a family reunion,” said Jack Forman of Recess Monkey about the show’s lineup, “We’ve played shows with all of these other artists, swapped stories, advice and support for years!”

These talented musicians are sure to bring energy and joy to families on Saturday while playing for a good cause! Their passion for exposing children to music is no doubt one reason why families across the country, including many Levitteers, love these artists. Take a listen to their music for yourself with our 2017 Best Children’s Music Album Nominees playlist.

Good luck to all the GRAMMY nominees who will find out on Sunday if they’ve been honored with the prestigious award!