Beyond the Levitt network, organizations across the country are preparing festivities honoring Black culture, from the Juneteenth Atlanta Parade & Music Festival to Dallas’ Miss Juneteenth Pageant to the Gullah Juneteenth Freedom Celebration in Charleston, S.C. These events are much more than celebrations. They are hubs for creative expression that commemorate Black contributions. Planned are philanthropic efforts such as galas and blood drives, along with opportunities for small Black businesses to thrive, for Black art to get noticed, and for Black traditions to live on through dance, food, and spoken word. If you’re in the mood for a free livestream featuring star-studded talent, for instance, check out the Robert Randolph Foundation’s first-ever Juneteenth Unityfest on June 19. This virtual event will present renowned Black artists including Black Pumas, Aloe Blacc, Keb’ Mo, Billy Porter, India Arie and The Soul Rebels, as well as other renowned talent like Earth, Wind & Fire and Dave Matthews, to name a few. The livestream begins at 5 pm ET / 2 pm PT.

Juneteenth Festivities Across the Levitt Network 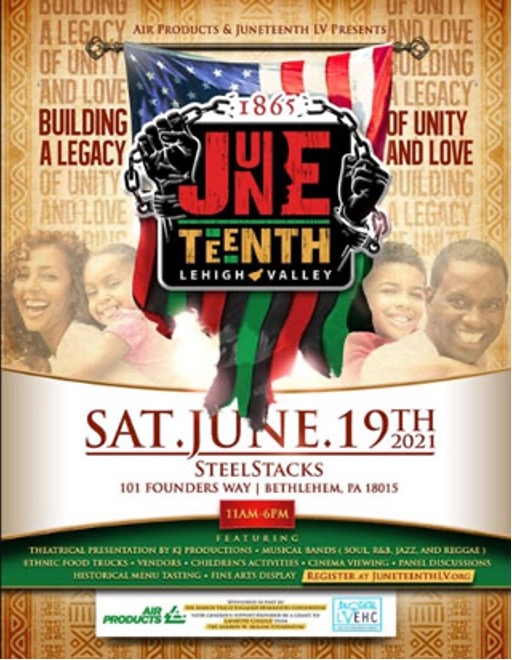 SteelStacks’ Juneteenth celebration, in partnership with local NAACP chapters, is jam-packed with live soul, R&B, jazz and reggae performances that pay homage to the musical foundations that were laid by Black artists. Performing on Levitt’s stage are Henry & The Reggae Rockers, a band who combines the rhythms of reggae, blues, R&B, roots, and rock. The daylong festival will also feature ethnic food trucks and vendors, educational storytelling and crafts for children, art exhibits, film viewings, and even a food tasting! According to Levitt Pavilion SteelStacks’ Executive Director, Anne Sturm, these organized activities aim “to engage community members with the opportunity to learn more about how Black people have contributed to all art forms.”

*Registration not required, unless you do a menu tasting

Sponsored by the Lehigh Valley Engaged Humanities Consortium with contributions from Lafayette College and the Andrew W. Mellon Foundation. 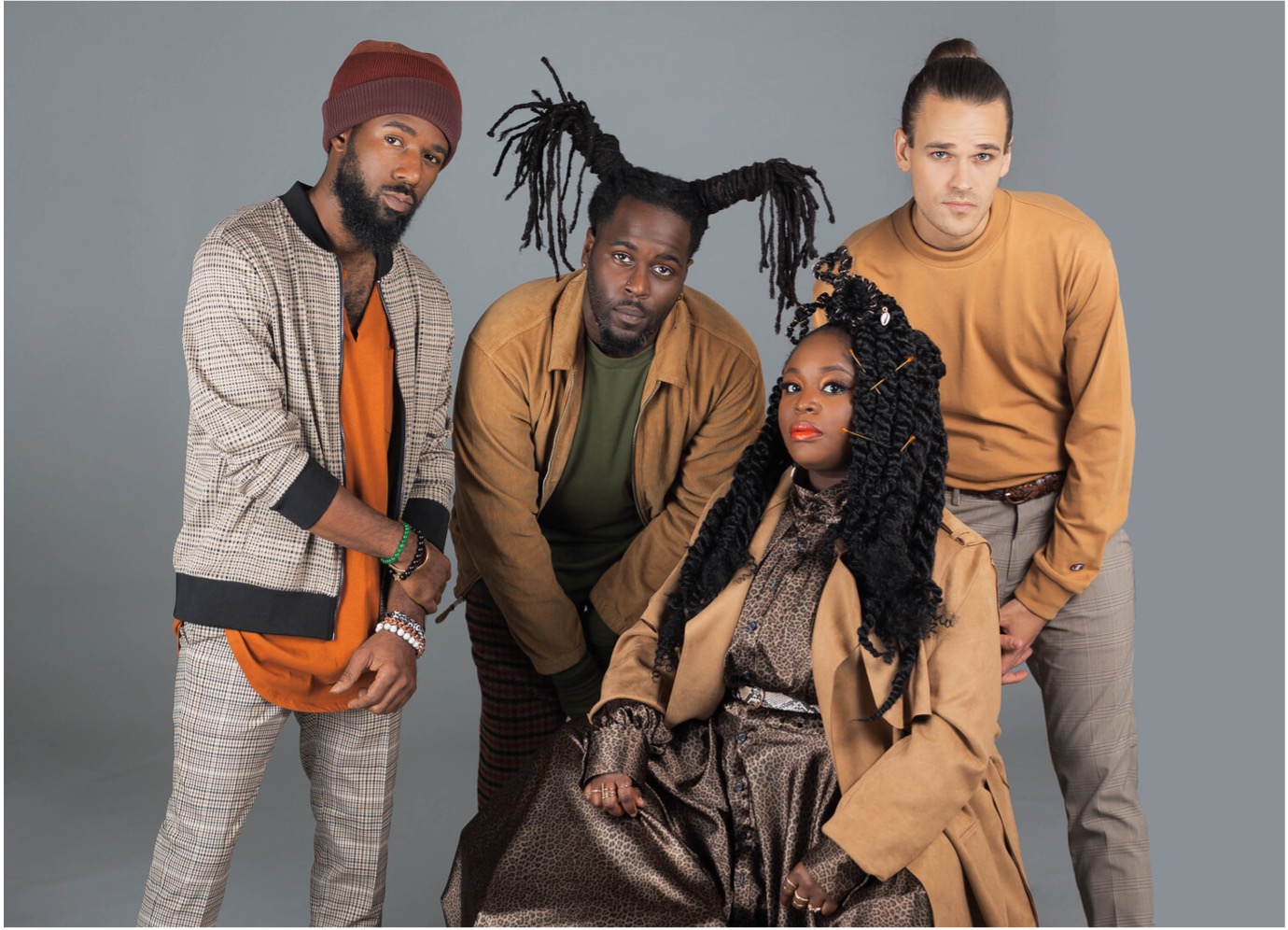 Levitt Pavilion Dayton is hosting past Levitt performer Tank and the Bangas, a critically acclaimed musical group known for their mix of soul, R&B, hip-hop and jazz, on the evening of Juneteenth. Along with this highly anticipated performance, Levitt Dayton will present an opening ceremony featuring drumming and spoken word performances by the Dayton Africana Council of Elders and the Oral Funky Poetry Production, accompanied by open discussions and prayers by local religious leaders. In creating the special celebration, Levitt Dayton hopes to “create conversations around the meaning and importance of Juneteenth through panel discussions, and also honor the ancestors that have provided leadership and strength to this point by honoring them,” according to Executive Director Lisa Wagner. The opening ceremony is meant to reinforce the roots of Black ancestors as they relate to this holiday and the community of individuals who call Dayton home. 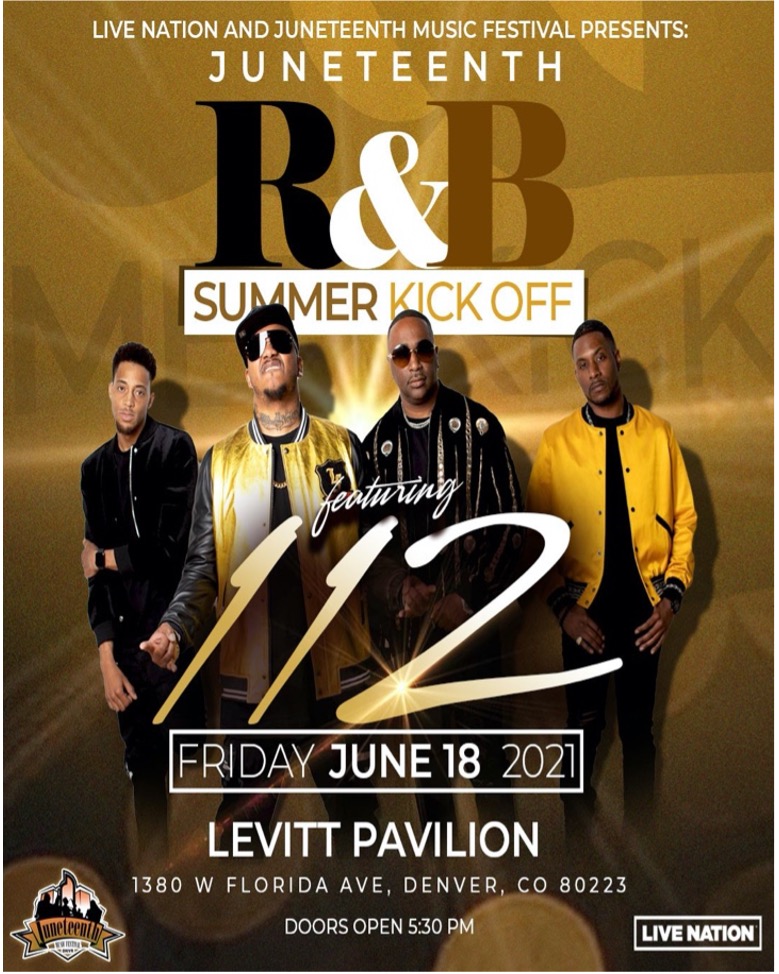 Levitt Pavilion Denver was chosen to kick off Denver’s 2021 Juneteenth Music Festival and 10-year anniversary! The concert will headline the Black GRAMMY-winning R&B group 112 (pictured on the left), known for their legacy of rap love songs. The rest of the festival will celebrate the holiday with a variety of vendors and planned activities including a live broadcast, Juneteenth parade, two-day street festival, drag show and more. “Levitt is beyond excited to be part of the festival,” said Jessi Whitten, director of marketing and development at Levitt Denver. Combining the significance of Juneteenth with Black Pride, she hopes the event educates and inspires reflection while gaining support for the Black LGBTQ+ community. All proceeds go to the Juneteenth Music Festival to plan future educational and community events. 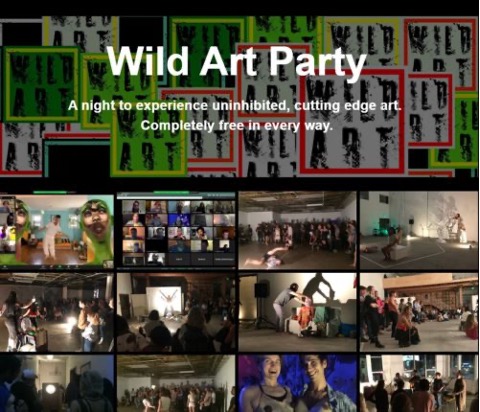 Levitt Pavilion Los Angeles is partnering with the Wild Art Party and HOMEplxce to host an event filled with innovative and experimental forms of art and media for their Juneteenth and Black Pride celebration. This year’s virtual festival will gather some of the most creative and profound Queer, Black and Trans artists from across the country to perform poetry, oral history, hip-hop tributes, and much more for a day to remember. The holistic celebration will honor Black contributors as they continuously break the boundaries of art and expression while examining the intersections of Queerness and Blackness as they mingle and challenge one another. Artist reveals will take place later this week on Instagram @HOMEplxce!

Sponsored by the CalArts Alumni Council Seed Grant and Wild Art Group Advisory Board and Members. 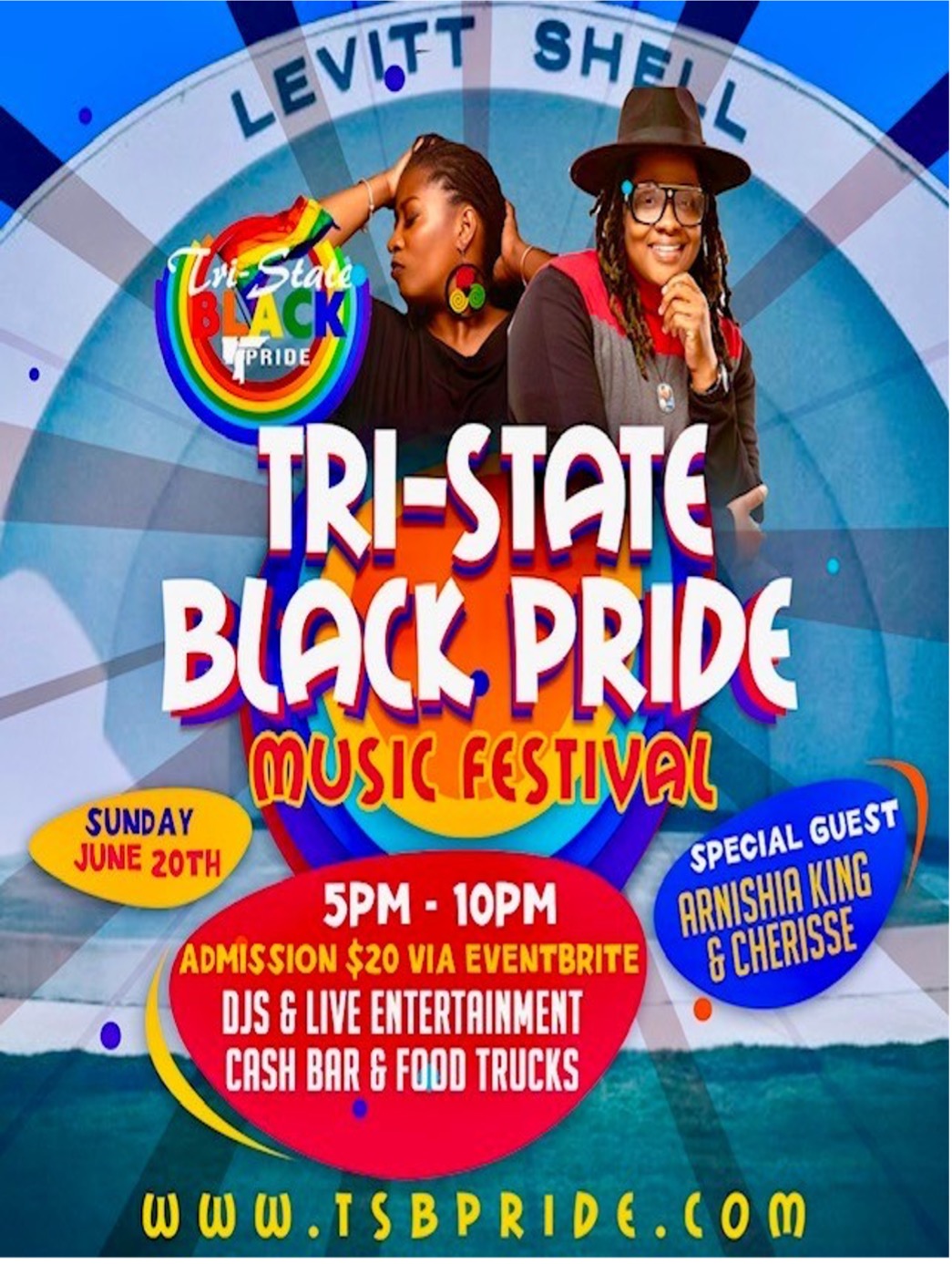 Levitt Shell Memphis is closing off the 2021 Tri-State Black Pride Music festival with a concert on its lawn featuring Cherisse Scott, Arnishia King, and many other local artists who perform R&B, gospel and jazz. The concert will also include DJs and food vendors. When asked about the origins of the event, Natalie Wilson, executive director of Levitt Memphis, shared that “by partnering with Tri-State Black Pride, we hoped to make our stage more accessible to all Memphians with unique activations, events and festivals, creating new friendships at the Shell.” In addition, the city’s rich history sets the stage for a lineup of empowering Juneteenth and Pride speeches by both local and national speakers, fostering community, inclusivity and Black excellence. All donation-based admissions will go to Hope House, an organization that provides support for HIV-affected individuals and families.

Sponsored by The Cathedral Foundation. 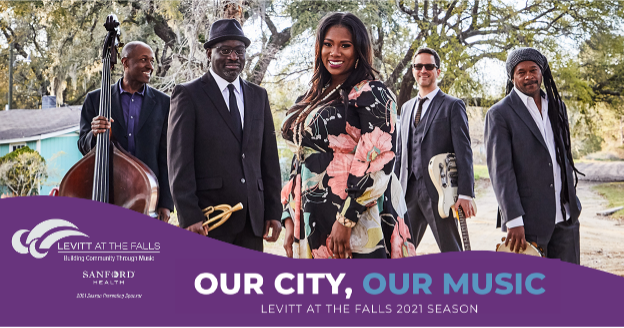 Levitt Shell Sioux Falls is partnering with Sioux Falls’ Juneteenth committee to celebrate Black artists and raise awareness of the historical day. Last weekend, on the opening night of Levitt Sioux Falls’ summer concert series, the first-ever Grammy-winning Gullah group Ranky Tanky performed their traditional African music, paying homage to their ancestors and long history of musical storytelling. Band member Charleton Singleton reflected on Juneteenth during the performance: “In our present climate we should all be continuing to support and enlighten each other on the importance of this significant forward step in our nation’s history.” During the Ranky Tanky show there was also an informational booth on Juneteenth detailing the following weekend’s upcoming celebration. And this weekend, Levitt Sioux Falls will be participating in the citywide Juneteenth celebration as a community partner with a booth to show its support of the festivities. 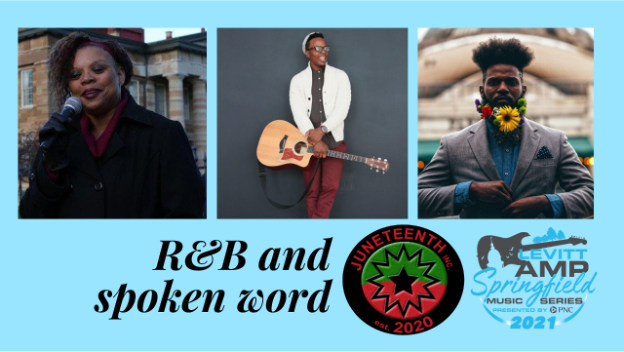 Serving as Springfield’s Juneteenth Celebration Kick-Off, R&B and spoken word performances by Black artists Debbie Ross, Nelly’s Echo and local wordsmith Brandon Alexander Williams will get the crowd going for the four-day festival. In regard to partnering with Springfield’s Juneteenth Committee, Lisa Clemmons Stott, one of the organizers behind Levitt AMP Springfield, states, “Our goal with our joint Juneteenth Celebration kick-off is to bring all parts of Springfield together to learn about and celebrate Juneteenth. We hope these soulful and captivating performers will inspire all of us to learn about the history behind this day as a unified city.” The rest of the event will feature a parade, family-friendly fun at Comer Cox Park, special exhibits at local museums, and much more!

Sponsored by PNC Bank and the Springfield Black Chamber of Commerce. 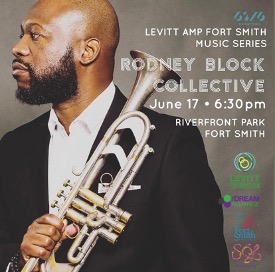 Kicking things off on Thursday night, Goodluck Slim will perform a mix of blues, classic rock and funk as part of the Levitt AMP Fort Smith Music Series. The venue’s MCs, Jay Richardson, Jackie Flake and Clifton Culpepper, will then share why we should celebrate Juneteenth. Representing three Black Greek fraternal organizations, these MCs’ will facilitate a continuous open discussion about Black freedom, power and achievement. Following this conversation, spoken word artist Lynette Thrower accompanied by percussionist Bruce Fowler will open for local musician Rodney Block, a jazz trumpeter known for his smooth and moving performances. Said Talicia Richardson, executive director of 64.6, the nonprofit behind the Levitt AMP Forth Smith Music Series, “This event is dedicated to Black appreciation and we hope to host many on this historical weekend.”

Sponsored by The Dream Alliance, The City of Fort Smith and SOL Studios.

With so many different events stacked up for this week, we’re overflowing with excitement for this year’s Juneteenth celebrations honoring the creativity and musical talents of Black artists. All of these festivities are sure to inspire, entertain and illuminate the Black experience both past and present. We hope you’re able to attend one of this week’s Juneteenth celebrations at a Levitt location – be sure to let us know about all of the fun through social media!