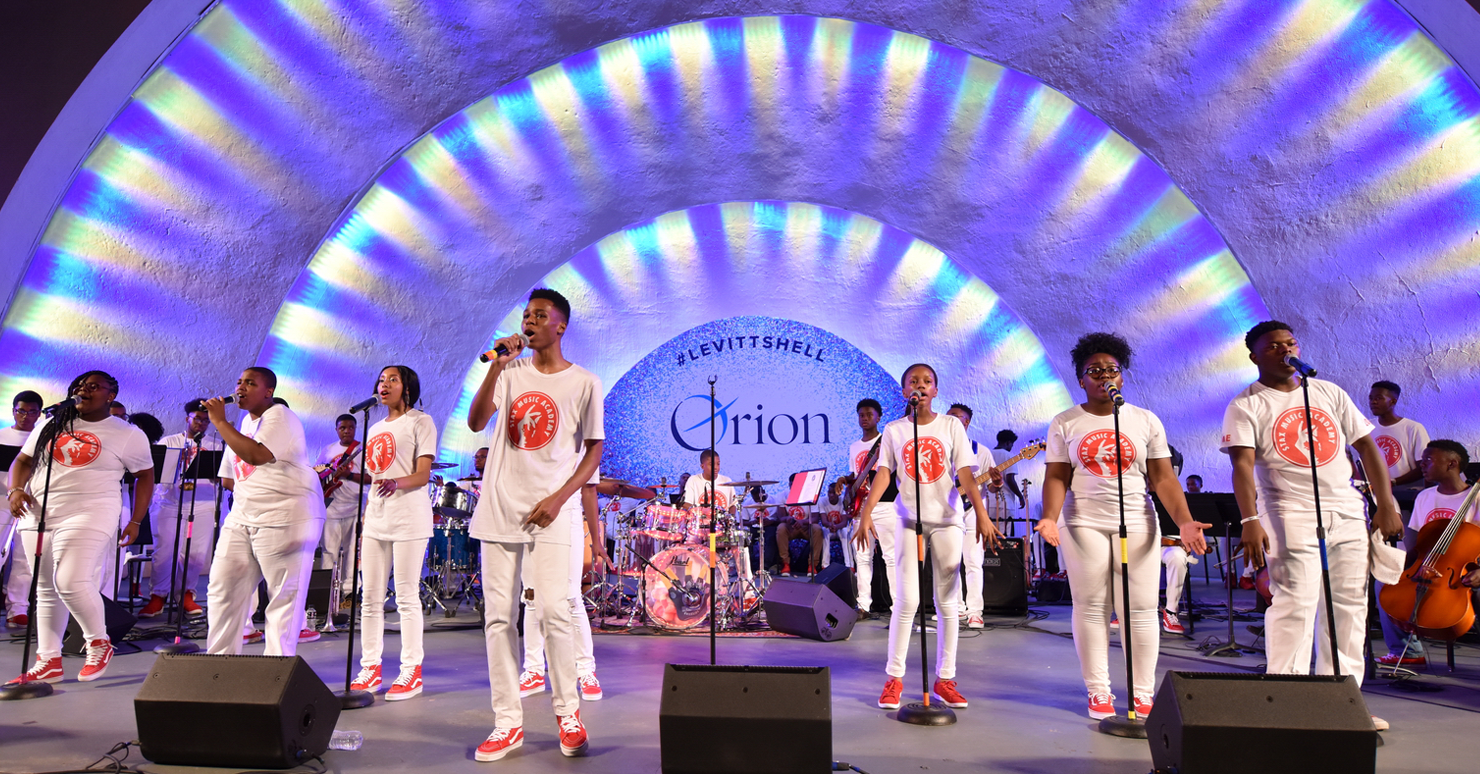 Since 2015, Levitt Shell Memphis has partnered with Stax Music Academy, a high-caliber afterschool and summer music program that evolved from legendary Memphis soul label Stax Records, to produce one of the most celebrated evenings of the summer. Dubbed “Stax Night,” this an annual showcase of young musical talent on the Levitt Shell stage is the culminating event following weeks of intensive lessons and on-the-road performances for middle and high school students enrolled in Stax’s summer program. Dozens of youth take to the Levitt stage to showcase their talents, from singing and playing instruments to performing choreographed dance routines. “There’s about 85 students…full orchestral sessions, dancers in the front,” said Cindy Cogbill, Levitt Shell’s Director of Programming & Marketing. “They carry every square inch of our space.” The event draws thousands of people each summer, and playing for such a large crowd is a new experience for most of the students. “It’s absolutely one of the biggest nights of the year for us, and certainly our biggest public concert,” said Tim Sampson, Communications Director of Stax’s parent organization, the Soulsville Foundation. “It really helps them build up self-confidence and self-esteem.” 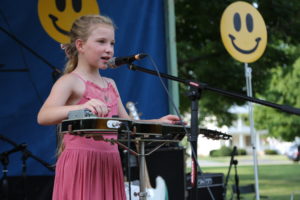 The spotlight has also been shined on students in Galva, Ill., a rural community home to just over 2,500 people. Recognizing the opportunity to engage youth when planning the community’s first Levitt AMP concert series in 2018, John Taylor, the series’ lead organizer, immediately contacted area schools to see how they could collaborate. Soon, Levitt AMP Galva booked the Galva High School band, Cambridge High School band, and student musicians Been There Done That and Chloe Finch as opening acts of Levitt AMP concerts. Taylor touted the enthusiastic response from participating students —in addition to providing concertgoers with a slice of homegrown entertainment, the Levitt AMP Music Series also gave young musicians a chance to showcase their talents to a community-wide audience in an expansive outdoor setting. “They got to play in front of a different audience, a larger audience, to interact with their community in a way that they wouldn’t otherwise be able to,” said Taylor. 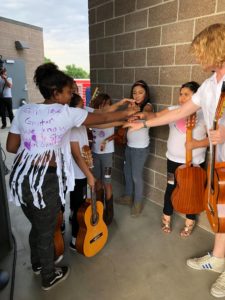 The G.L.O.G.s prepare backstage for their performance at Levitt Pavilion Denver

Since its inaugural concert season back in 2017, Levitt Pavilion Denver has carried on a tradition of local youth performing as the first opening act of the season—literally setting the tone for an entire summer of free music under the stars. From the beginning, Levitt Denver partnered with Swallow Hill Music, a Denver nonprofit specializing in music education, to create the BandStart program, which provides free music lessons to students from challenged neighborhoods. Andy Thomas, Levitt Denver’s Associate Director, believes the program equips students with the resources for sparking a lifelong interest in music, “…here’s the tools, here’s the beginning of that, here’s what you need to get started,” said Thomas.

Every year the program includes eight weeks of lessons culminating in the young musicians taking the Levitt Denver stage to perform the first notes of the concert season. In 2018, an all-female class of seven BandStart students, who dubbed themselves G.L.O.Gs (Girls Who Love Guitars) also played an opening slot during Levitt Denver’s summer series and were even featured in the local news.

Levitt partners are also creating sought-after opportunities for youth to participate in workshops led by national touring artists. For the past five years, Levitt Pavilion SteelStacks, in collaboration with ArtsQuest, has connected youth from Bethlehem area schools to Levitt artists through masterclasses. Up to three times a year, the program brings high-caliber, education-focused artists from around the country into middle school classrooms, where they work directly with students on various aspects of musicianship. Past artists have included Levitt National Tour headliners Black Violin, as well as Chicago-based jazz/hip-hop group LowDown Brass Band and the New Orleans R&B of Funky Dawgz Brass Band. “One thing that’s been really exceptional to me is that these performers have really helped the kids with their confidence,” said Lisa Harms, ArtsQuest’s Director of Educational Outreach, “encouraging them to take risks, making them feel comfortable, giving them good feedback.” Some masterclass students have even been given the opportunity to perform alongside the artists on stage. The most recent masterclass featured Celtic duo The Moxie Strings, who worked with orchestra students at Bethlehem’s Broughal Middle School. In the words of Broughal music teacher Adam Stoltz, the workshop was “phenomenal.” (Check out highlights in this video).

While planning for its inaugural concert season in 2018, Levitt Pavilion Dayton realized that musician-led workshops would be a fantastic way to reach people who otherwise might have difficulty attending the free concerts. While at a music conference earlier that year, Wagner was inspired by the songs of Oklahoma-based Americana musician Kyle Dillingham and his message of hope and healing, and pitched him the idea of putting together a songwriting workshop at Daybreak, a local housing and resource center for Dayton’s at-risk youth. Dillingham accepted, and months later, after his band, Horseshoe Road, performed at Levitt Dayton on a Friday night, they headed to Daybreak the following morning to work with a group of teens. Upon arriving, Dillingham recalled being unsure of how they would engage, but as the morning progressed, the teens became more and more comfortable translating their ideas into music. Soon, a song began to take shape. Wagner stopped by the workshop mid-day and was amazed at the results. “At the end of four hours, they had brainstormed, written, composed, and recorded a song together,” she recalled. The song, which fused rap, rock and folk, was called “Umoja,” meaning “unity,” one of the principles of Kwanzaa. True to the name, Dillingham said “everyone in the room was a part of it.”

Dillingham (right) works with teens at Daybreak in Dayton, Ohio to write “Umoja”

After hearing the nearly-finished song, Wagner contacted the artist performing at Levitt Dayton that night and asked if they would be alright with the Daybreak youth performing their song as the opener. The band emphatically agreed, and the youth were ecstatic. When recalling the group’s emotional performance, Wagner said “there wasn’t a dry eye on the lawn that night.” (Experience the performance in this video.) The concert was moving for the performers as well – after leaving the stage, Dillingham recalls a teen from the workshop who was recovering from substance addiction looking him in the eyes and saying, “I really needed this today.” The conviction in the young man’s voice left a lasting impression on the musician, who called the workshop at Daybreak, and their shared performance, one of the highlights of his career.

Levitt Dayton and Daybreak continued its collaboration this year—in June, Chicago-based hip-hop fusion group Sidewalk Chalk worked with three young people at Daybreak to write an original song called “Life Is Beautiful,” which is currently being mixed by Josh Egeland, Daybreak’s LGBTQ Program Liaison. Egeland looks forward to more of what he describes as “organic” workshops with Levitt artists in the future.

Training grounds for the music industry 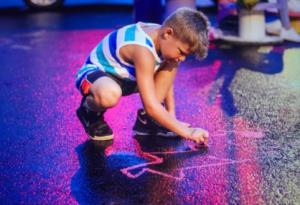 Beyond the thrill of performing on a Levitt stage or gaining unique insights into the creative process through artist-led workshops, students are also learning event production skills at Levitt venues, from sound mixing to concert photography. This past summer at Levitt AMP Utica in upstate New York, for example, the “Levitteen” internship program paired three high school students alongside photography and videography professionals as they gained real-world experience in the field and learned to use expert equipment. “The impact for the Levitteens was that they were hands-on all 10 weeks, and worked on projects that they are able to use as portfolio pieces,” said Michelle Truett, one of Levitt AMP Utica’s key organizers. In turn, Truett said, the work of these interns helped to create more engagement for the concert series on social media and beyond, increasing visibility for artists and sponsors. Nancy Ford, a professional photographer who volunteered to mentor the interns, was especially impressed with how the students overcame their shyness when talking to strangers over the course of the internship. “It’s so great when you give students advice and you see on their faces, not only the enthusiasm, but that something has ‘clicked’ inside of them,” said Ford.

At Levitt Shell Memphis, college students have been given opportunities to gain professional-level production experience through “This is Memphis,” a student-led celebration of the city’s music and culture in partnership with the University of Memphis. Students not only perform on the Levitt Shell stage, but also run audio, video and lighting equipment for the show, with the Levitt Memphis production team assisting as needed to give the performance an elevated touch. “Young people can come here and see that you can have a great career behind the scenes as an audio technician or an engineer…here’s the level of professionalism that you need to do that,” said Cogbill.

In Levitt communities large and small, the power of free, live music is extending beyond the Levitt stage and into the hearts and minds of youth through robust partnerships with artists, schools and nonprofits. Whether inspiring young people to pursue their interest in music, helping students increase their creative and social confidence, or preparing them for future career opportunities onstage or behind-the-scenes, the benefits of these educational partnerships are far-reaching. Stay tuned, as in the weeks to come we’ll be highlighting even more ways that educational partnerships and collaborations are unfolding in Levitt communities across the country!