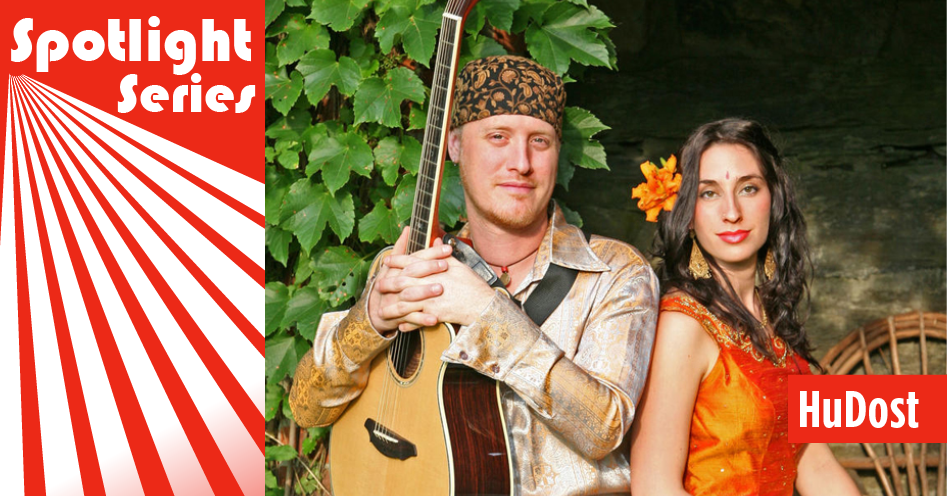 Teeming with rich, iridescent vocals layered over powerful electric guitar licks, driving percussion and the haunting church organ-esque tones of the harmonium accented by the shimmering strings of Shahi Baaja (Electric Indian Auto-Harp), Bazouki and Dulcinet, HuDost’s one-of-a-kind sound is built on the impeccable musicianship of life-partners Jemal Wade Hines and Moksha Sommer. HuDost performs as either a duo or along with a band of fellow eclectic musicians—often engaging concertgoers through multiple mediums by weaving performance art and dance into their shows for an unforgettable experience that will leave audiences spellbound.

Blending pop and rock ‘n’ roll with traditional Sufi music, Bulgarian, Croatian, Macedonian, and Balkan folk music, HuDost has been making music together for over 13 years, growing together as musicians, spiritualists and as a couple. Sommer and Hines first crossed paths in 2005 at a Sufi gathering in Chapel Hill, N.C. Hines, who was born in Knoxville, Tenn., and raised in Gainesville, Fla., had a background playing in hard rock bands and a penchant for the wild. Sommer was born and raised in Montreal, Canada, and had performed in the politically radical Bread and Puppet theater as a child and trained in Eastern European and Mideastern vocal styles with a degree in Creative Arts from Dawson College in Montreal. Although they came from disparate backgrounds, they found harmony in their common desire to spread joy, wonder and love in their communities and in the melodies of the transcendent music they create together.

Sommer and Hines’ Sufi roots extend to their band’s name, HuDost. As Sommer explained in an interview with online tastemaker MusicPerk, HuDost is a Sufi greeting comprised of two words, “Hu” which is the breath shared by all and “Dost” which means ‘true friend.’ Together, HuDost is the “true friend of the shared breath,” encapsulating the sense of shared community and experience their music explores. As the band puts it, “It is through music that the losses and gains, pains and triumphs, and excruciating beauty of life can be given a voice of empathy to the synonymous lives of all people.”

After finding a national following and critical acclaim with their first two albums, In an Eastern Rose Garden (2005) and Seedling (2006), tragedy struck in 2008 when Sommer was diagnosed with a brain tumor that required invasive surgery. Although the procedure was successful, the recovery process included re-learning language skills, losing and regaining proper sight, and experiencing seizures. However, instead of losing hope, Sommer discovered a potent desire to facilitate her healing through music, using the fragility and resilience she experienced as the thematic basis of their 2010 release Waking the Skeleton Key.

In 2013, the couple welcomed their son Kaleb into the world, and has found profound inspiration in their new role as parents. In an interview with the Knoxville News Sentinel, Sommer gushed, “I’m inspired to sing to him all the time and not just kids’ songs. He’s almost like a creative lever pushing me forward to new material. It’s been wonderful.” Hines added, “We’re making up all kinds of songs, we’ll be singing a silly little kids’ song and say, ‘We should write that one down!’”

With their latest original album Sufi Kirtan (2015) released to widespread critical acclaim, HuDost collaborated with Steve Kilbey (of the Australian outfit The Church) and special guest Jon Anderson (of the Rock and Roll Hall of Fame inducted band Yes!) to create The Word Is… released in April 2018 to glowing reviews. On top of their prolific touring and recording schedule, the duo has engaged in rigorous advocacy work since 2015 as Kentucky Congressional District Representatives for ONE (a nonprofit working to end extreme poverty and, specifically, the sexism of poverty).  Currently, the band is in studio working on a new original album, of Water + Mercy slated for release later this year. So be sure to RSVP for this incredible performance, and head on over to Levitt AMP Woonsocket Friday night for an evening of vibrant music and community that will make your spirit soar.

One thought on “Spotlight Series: HuDost”