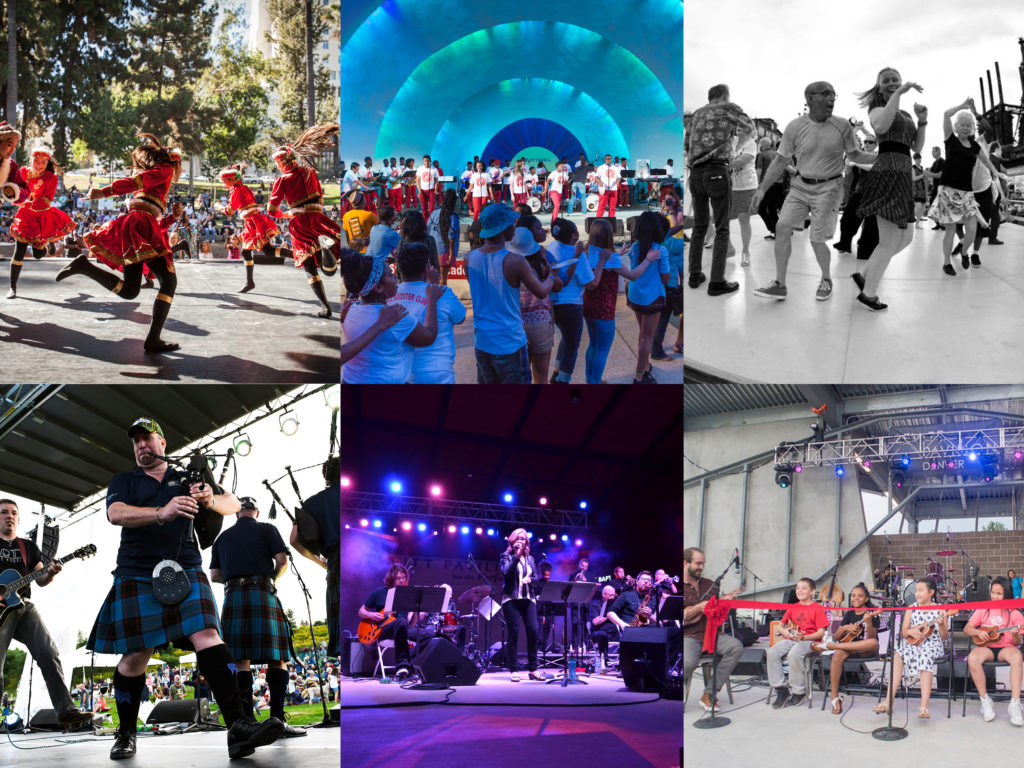 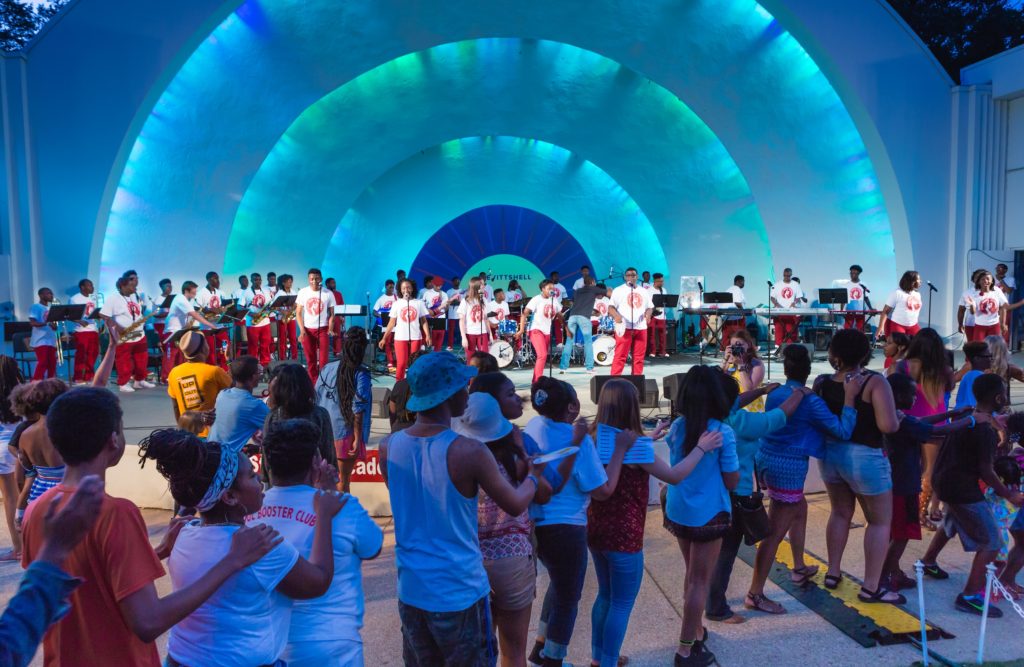 As the birthplace of legendary soul and R&B record label, Stax Records, Memphis is steeped in American music history. Both the physical location and original structure of the Levitt Shell—once the Overton Park Shell—and the city of Memphis share a rich, deep musical connection. Beginning in the mid-20th century and up through the 1980s, Overton Park Shell attracted thousands for outdoor concerts featuring the king of rock ‘n’ roll himself, Elvis Presley as well as Stax artists like Booker T. Jones (who later performed at the Levitt Shell in 2014). In recent years, Stax’s relationship with Levitt has blossomed thanks to a partnership with the Soulsville Foundation, the organization behind Soulsville Charter School and Stax Music Academy, home to some of the most prestigious youth music education programs in the country. Each June, during the Levitt Shell’s free concert season, the Stax Music Academy’s Summer Music Experience program culminates in a grand finale student concert at the Levitt Shell, which is always one of the most well-attended events all summer long. Tim Sampson, Soulsville Foundation’s communications director, is especially grateful for the Levitt Shell’s Stax-focused night, since the event becomes one of the Academy’s greatest assets in recruiting more students. “Because the Shell is such a landmark in Memphis, it’s one of the best venues in Memphis for concerts. Our students love performing there,” he said. Sampson also highlighted the Levitt Shell’s role in providing the Music Academy’s predominantly at-risk student population with a stage of such scale and reach. “Performing in front of a crowd of thousands of people does wonders to boost their self-esteem, improve stage presence and build their confidence. It’s the highlight concert of the year for the Stax Music Academy.” 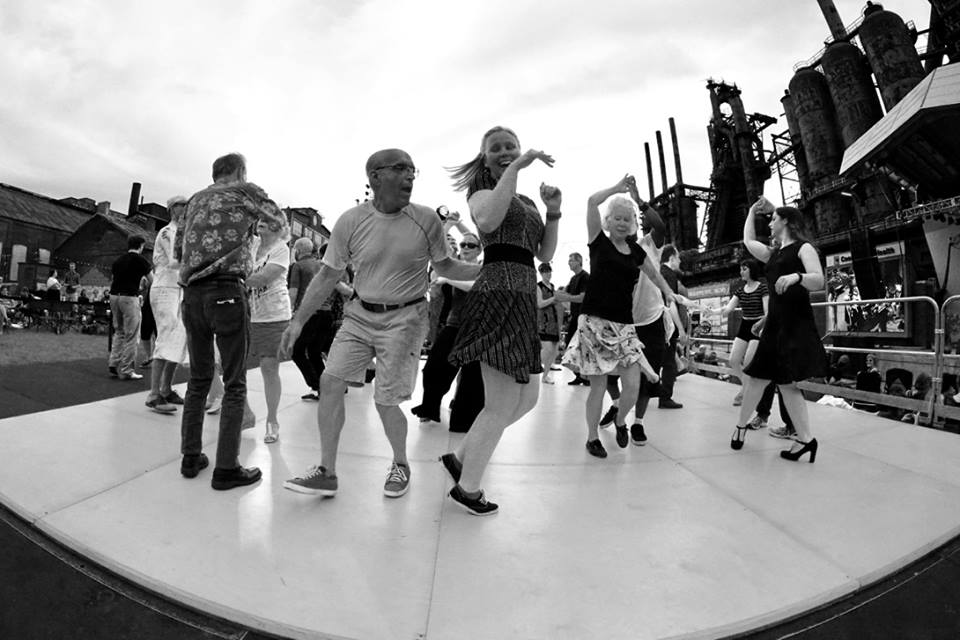 For three nights during the summer at Levitt Pavilion SteelStacks, concertgoers put on their dancing shoes and mid-century garb for Southside Swing, a multi-day celebration featuring free swing and hot jazz music, plus a temporarily-installed dance floor on the lawn! Dancers of all ages move and groove to the high-energy sounds of bands like New York’s Parisian jazz outfit, Avalon Jazz Band, and Evan Sherman Big Band, the brainchild of Ron Carter and Wynton Marsalis collaborator, Evan Sherman. Complete with interactive dance lessons to complement each night, this special weekend of Levitt SteelStacks programming formed out of a partnership with Lehigh Valley’s Gas House Dance Hall, a dance company that specializes in swing, jitterbug, burlesque and many other vintage dance traditions. “The Gas House has enjoyed its presence at SteelStacks tremendously,” said Robyn Shannon, who helped form the partnership between Levitt SteelStacks and the Gas House Dance Hall. “The wildly successful festivities have attracted dancers from Philadelphia and New York City, expanding both Gas House and SteelStacks’ presence.” Similar to how the birth of Levitt SteelStacks injected life into a neglected, industrial space, the Gas House Dance Hall was constructed inside a former service station, established in the 1930s. As Levitt SteelStacks continues injecting energy into the ArtsQuest campus through free concerts every year, Gas House Dance Hall’s dedication to keeping old-school dance traditions alive keeps people coming back for more, every year.

Rockstars on the rise at Levitt Pavilion Denver 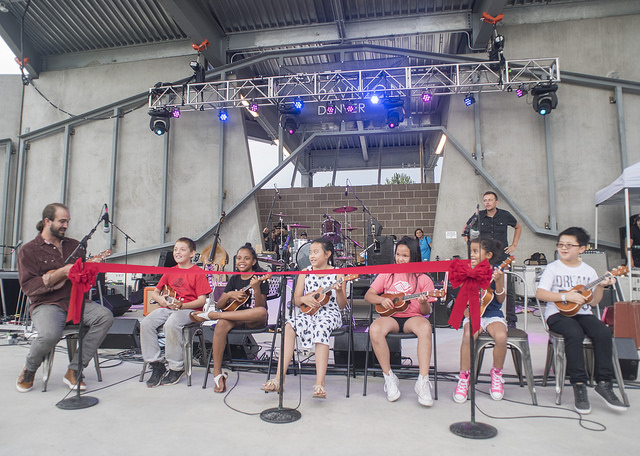 Levitt Pavilion Denver launched its inaugural season of free concerts in 2017 and has hit the ground running—after just one season, it was nominated for Pollstar’s Best New Concert Venue, named Best New Non-Profit Venue by Denver’s premier alt-weekly, Westword, and recognized as Coolest New Venue by 5280 Magazine, among other accolades. This is in part due to high-quality community partnerships, such as the BandStart program. Formed in conjunction with Denver music education center, Swallow Hill, the program provides free music lessons for children in Denver’s Ruby Hill/Godsman neighborhood. Last year, for the venue’s grand opening night, Levitt Denver teamed up with national music chain Guitar Center to gift 20 promising students with their first ukuleles, and invited them to open for alt-country band Slim Cessna’s Auto Club. Showcasing a community partner on opening night—BandStart was the first performance ever on Levitt Denver’s stage!—sent a welcoming message to the community and neighborhood and has helped inspire additional partnerships. “BandStart has proven to be a way we can tangibly and creatively give back to the Ruby Hill neighborhood and the children who live here,” remarked Levitt Denver’s associate director, Andy Thomas. “We were able to provide these children with their first instrument, and the thrill of playing it on stage for the first time.” The BandStart partnership is a testament to the local community’s role in Levitt Denver’s programming, ensuring that music—whether it’s performance, education or live concerts—is truly accessible for people of all ages and backgrounds. 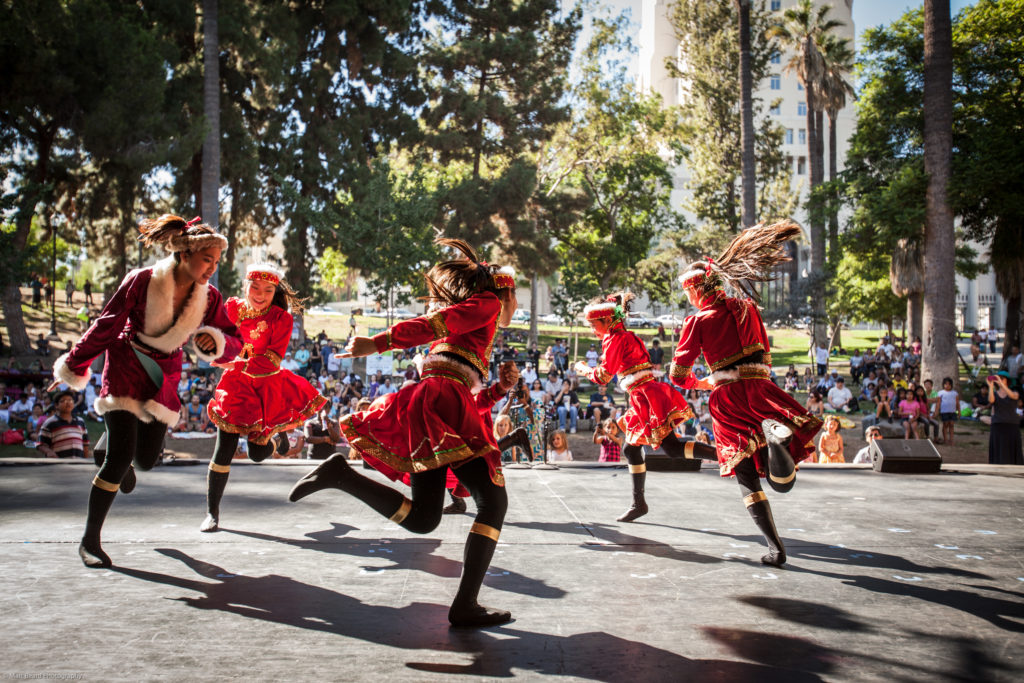 As home to one of the most diverse urban populations in the United States, Los Angeles and its melting pot of international cultures are the focus of Levitt Pavilion Los Angeles’ programming. Each summer, Levitt LA features a range of cultural programming, where a wide variety of performers are invited to take the stage with traditional and contemporary styles of music and dance. The Jung Im Lee Korean Dance Academy, one of the largest Korean dance studios in Southern California, has brought their vibrant costumes and exciting dance routines to MacArthur Park for many seasons. Their widely-attended performance, named Silk Road, featuring drummers, dancers and more, has made Levitt LA one of the only free music destinations in the city that provides Angelenos an opportunity to engage with the city’s rich Korean heritage and culture. Similarly, Levitt LA has proudly put the city’s tapestry of pan-Latin culture on display by inviting dance troupes like Tierra Blanca to open up for award-winning talent, like GRAMMY Award winners La Santa Cecilia. “We’re really looking forward to the upcoming season at Levitt LA,” said Aurora Anaya-Cerda, director of community relations and outreach at Levitt Los Angeles, “especially because we have partnered with local organizations and neighborhood councils around the Levitt Pavilion to highlight Central American, Afro-Peruvian, Korean and myriad cultural communities in Los Angeles. It will be beautifully representative of our diverse city.”

Getting jazzy at Levitt Pavilion Arlington 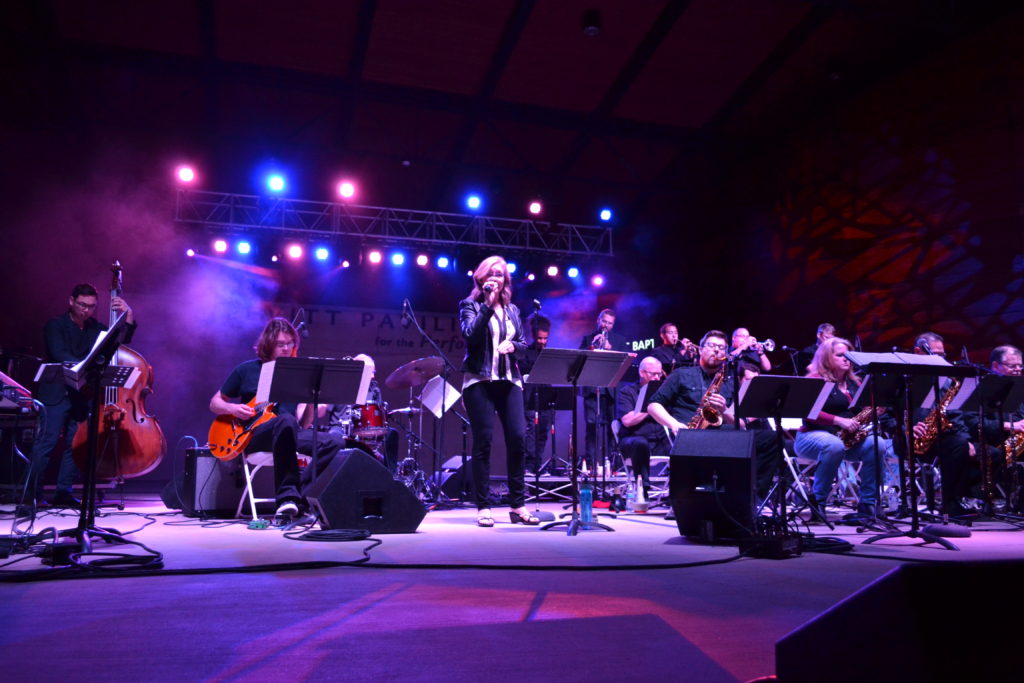 One of Levitt Pavilion Arlington’s many flagship partnerships is their connection with the University of Texas Arlington’s music program, recognized as one of Texas’ best college programs for music education. Two award-winning faculty members, Timothy Ishii and Dan Cavanagh, bring their talented student musician groups, the UTA Jazz Orchestra and the American Jazz Composers Orchestra, to perform old-school and modern jazz for a packed Levitt lawn every summer. As hosts of the UTA Jazz Festival, a buzzy mainstay of the Texas jazz scene every year, the UTA jazz department has brought one of America’s most celebrated genres to Levitt Arlington, while providing aspiring musicians from the University a premier performance venue to showcase their talents.  “We have had an incredible partnership with our neighbors at the University of Texas at Arlington’s Department of Music since almost the very beginning,” says Patti Diou, Levitt Arlington’s executive director. “It’s not just about performing, it’s about providing an educational experience for the UTA Jazz students with internationally known jazz artists, including GRAMMY winners and living legends, like jazz drummer Jimmy Cobb, then sharing a stage together.” 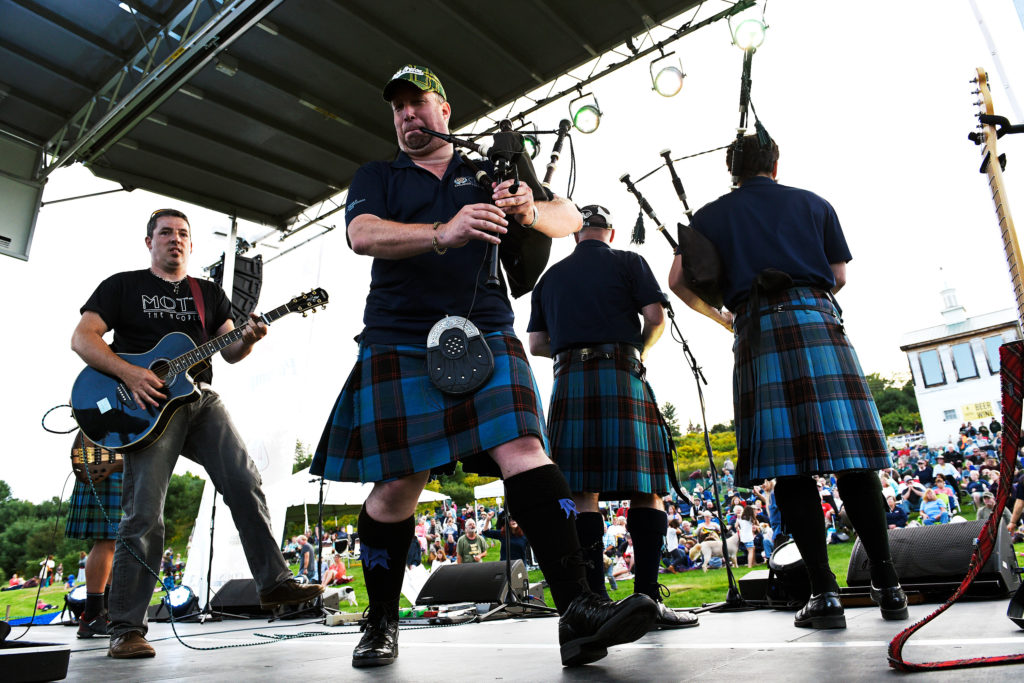 Every year, the Levitt AMP [Your City] Grant Awards empowers up to 15 nonprofits to transform underused public spaces through free concerts, with each Levitt AMP grantee producing and curating a series of 10 free concerts in their communities across the country. By using a public voting process to determine the winners each year, the Levitt AMP program is a community-driven affair from the start. As such, Levitt AMP grantees value community participation and partnerships each step of the way. In 2017, for example, Levitt AMP St. Johnsbury grantee Catamount Arts invited the Catamount Pipe Band to perform on stage. As Vermont’s premier Scottish bagpipe band, this gave the Levitt AMP St. Johnsbury Music Series the opportunity to pay homage to Vermont’s heritage of Celtic culture.

In Sheboygan, Wis., the Levitt AMP Music Series’ Community Engagement tent is a fixture of the concerts, inviting various community organizations to have a presence during on-the-lawn programming. “For our first Levitt AMP season, we invited Sheboygan Performing Arts (SPA) to put together a performance and perform as an opening act, which was hugely successful,” said Angela Ramey, performing arts residency coordinator at Levitt AMP grantee, John Michael Kohler Arts Center. This initial collaboration with SPA opened the floodgates for four years of eclectic programming. “Since then, we’ve also invited Sheboygan Symphony Orchestra and Concordia Singers to bring classical music, musical theater, barbershop quartets and more to the Levitt AMP stage.”

In Galva, Ill., where just over 2,500 people reside, special performances by the local high school’s big band are sure to bring the whole town together for the first Levitt AMP Galva Music Series. “The Levitt AMP Music Series will give local school bands an unprecedented opportunity to showcase their talent to new audiences,” said John Taylor of Levitt AMP grantee, the Galva Arts Council. “In addition, before each concert, a range of Galva-based nonprofits will serve dinner and have an opportunity to connect with all our community members.”

Whether it’s the expansive urban landscape, or a small town of a few thousand people, Levitt’s focus on community-driven programming makes Levitt venues places for cultural exchange and amplified community pride. Celebrating diversity, showcasing local treasures and ensuring access to high quality music are core values at Levitt, and each free Levitt concert series is a true reflection of these ideals. As music lovers continue to come together at Levitt concerts every summer, giving the community center stage season after season has become a special part of the Levitt experience.

One thought on “Levitt partnerships in action: When community takes center stage”