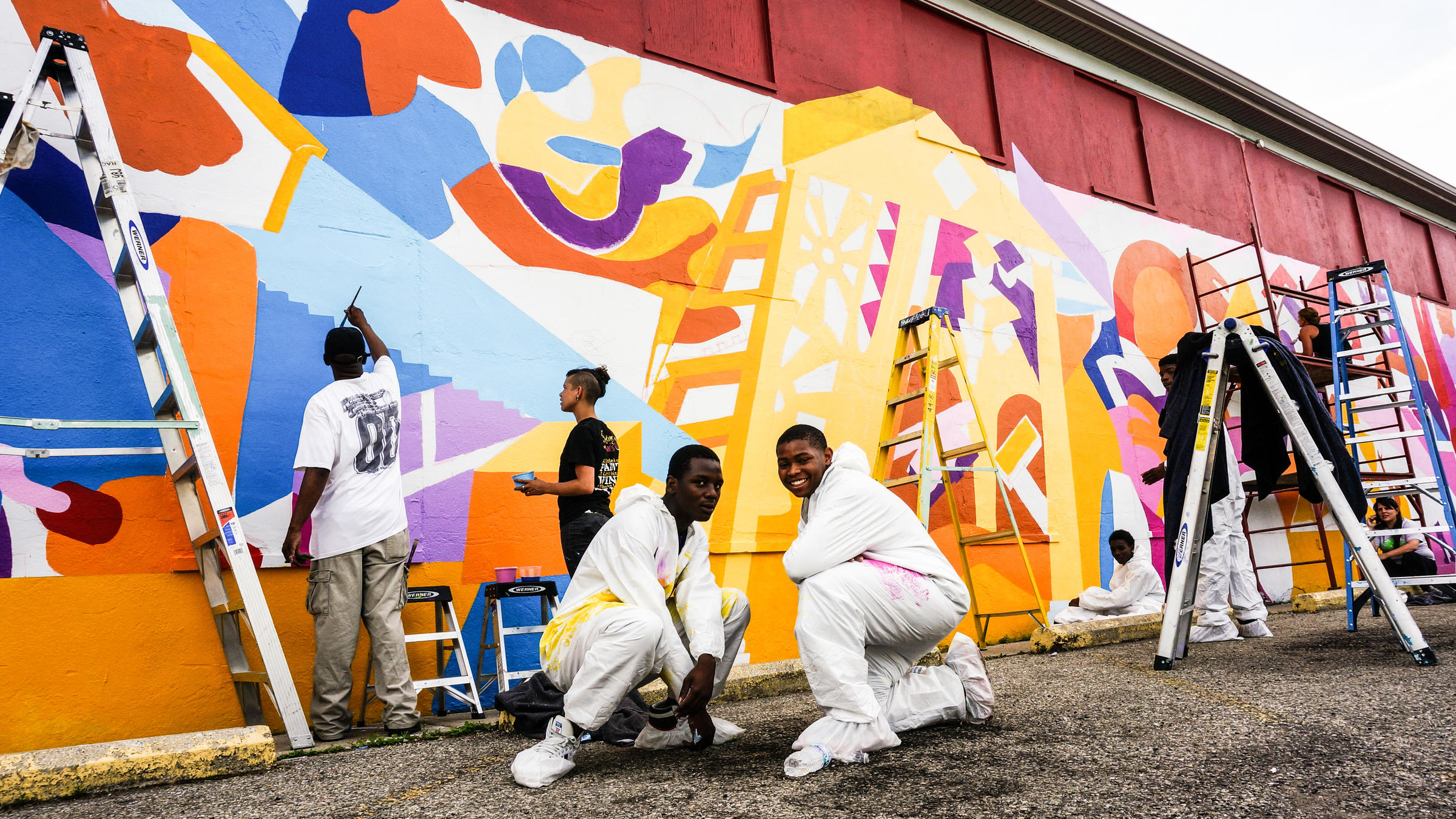 With inspiration drawn from their surrounding communities, murals can vividly depict motivations and aspirations of the artists and community members who created them, as well as provide enjoyment for people simply viewing them. Take a look at some of these inspiring murals adorning Levitt cities across the country! 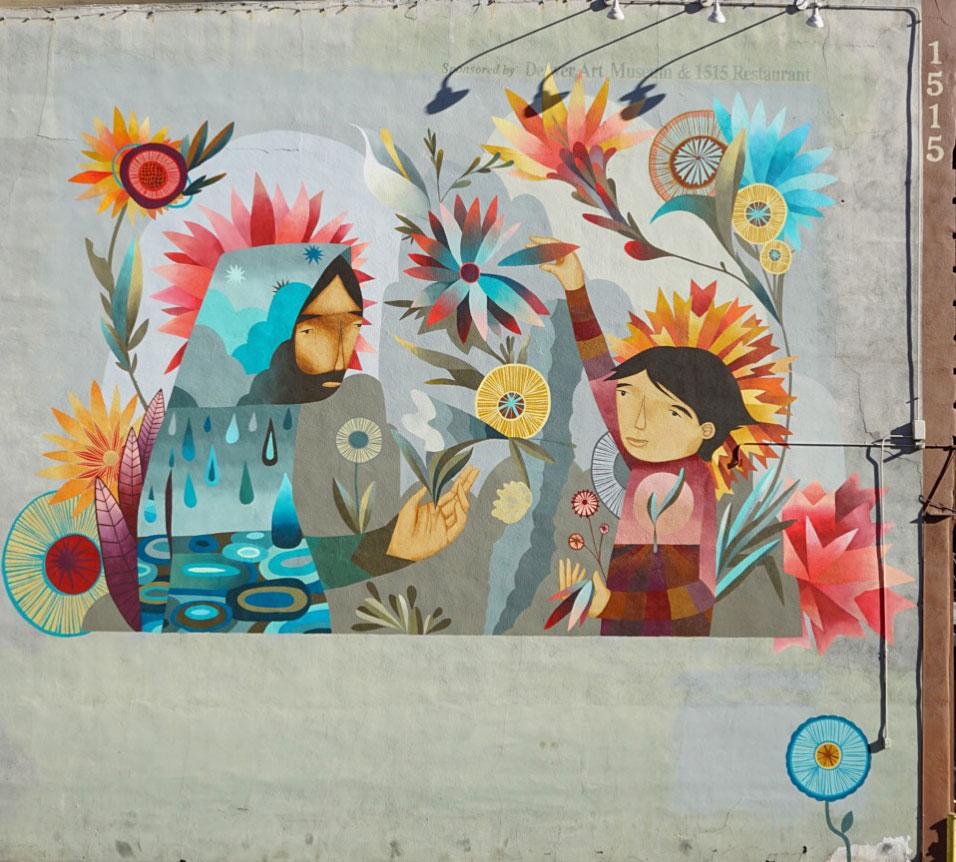 Denver, Colo.—which will launch Levitt Pavilion Denver this July—has no shortage of public art, with dozens of new murals painted just last year. One such mural is on 1515 Restaurant’s east facing wall, which Denver Art Museum has maintained since 2001. The wall, which at the time was host to a fading Renoir reproduction, had not been updated with new artwork in over a decade. So last year, the museum asked local artists Jaime Molina and Pedro Barrios to help with that. Known for their murals throughout Colorado, Barrios and Molina drew inspiration from interactive kids exhibits inside the museum, which offers free youth admission through its Free for Kids program. “It seemed like all the exhibits were empowering kids,” said Molina in Denver publication Westword.

“This whole concept is illustrating a grownup passing that knowledge on to a younger person so they can construct their own world and their own reality.” 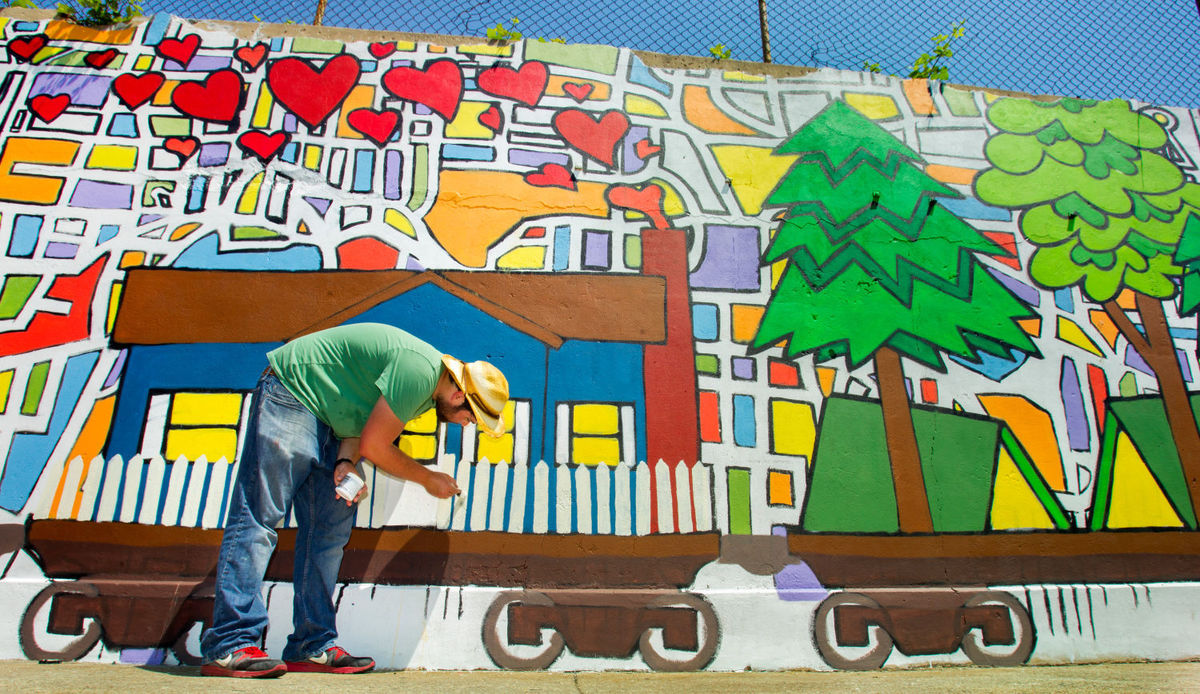 In planning for a mural in 2013, the Greensboro Mural Project conducted interviews with about 100 people in the city, home to Levitt AMP Greensboro, revolving around one question: “What makes home?” Many of the interviewees were clients at the Interactive Resource Center, which contacted the organization to paint the wall outside its day center facility serving people experiencing homelessness. Greensboro artist Justin Poe then synthesized and re-interpreted the responses as a 60-foot-wide painting of homes on a train overlaid against a colorful city map—symbolic of a community “moving together to overcome obstacles.” Plus, volunteers, homeless artists and passersby even got involved with the painting process. From seeking public comment for the mural design to raising funds through Kickstarter, the Greensboro Mural Project—which is responsible for over 10 other murals across the city—is truly a grassroots effort to beautify Greensboro and engage the local community. 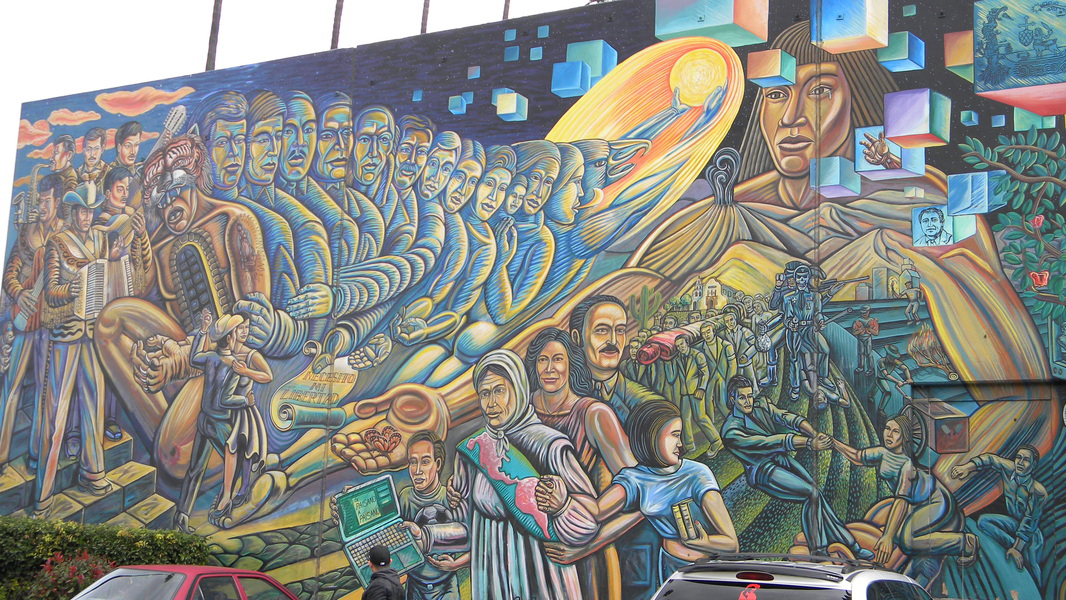 Murals can be found all around Levitt Pavilion Los Angeles’ home of MacArthur Park, with depictions of famous Latino figures like singer Selena and actress Sara García standing out in the midst of storefronts. Just eight miles southeast of the venue is another vibrant mural on the Ruben F. Salazar Park recreation center. “The Wall That Speaks, Sings and Shouts” is a highly detailed mural by East Los Angeles-born Paul Botello that features energetic expressions of Latino culture and even bears the likeness of popular Norteño band Los Tigres del Norte. Claiming that the band, which commissioned the mural in 2000, shares his “philosophy of speaking out for those with no voice,” Botello also depicts scores of people overcoming hardships—an empowering tribute to East Los Angeles’ large Latino community.

During its 50th anniversary celebration last year, the Wesley Community Center—about 10 minutes east from the developing Levitt Pavilion Dayton—unveiled a permanent mural made possible by HAALO (Helping Adolescents Achieve Long-Term Objectives), a program created through a partnership between the K12 Gallery and the Montgomery County Juvenile Courts. Because the local juvenile court system sees many youth from the Westwood neighborhood, where the Wesley Community Center resides, people like Juvenile Court Community Engagement Coordinator Brittini Long want the mural to serve as a source of hope for local young people. Artist James Pate designed the mural and HAALO brought in at-risk teenagers to paint it. Behind the artwork’s depictions of saws and hammers—as well as caps and gowns—is the idea of a community “rebuilding,” which Pate calls a “sneaky way” of getting kids to realize that “education is a tool” to achieve their goals.

Cheers to all the artists, volunteers and community advocates who are bringing people together through art! Do you know of a mural with an inspiring message in your town or city? Tell us about it in the comments below!