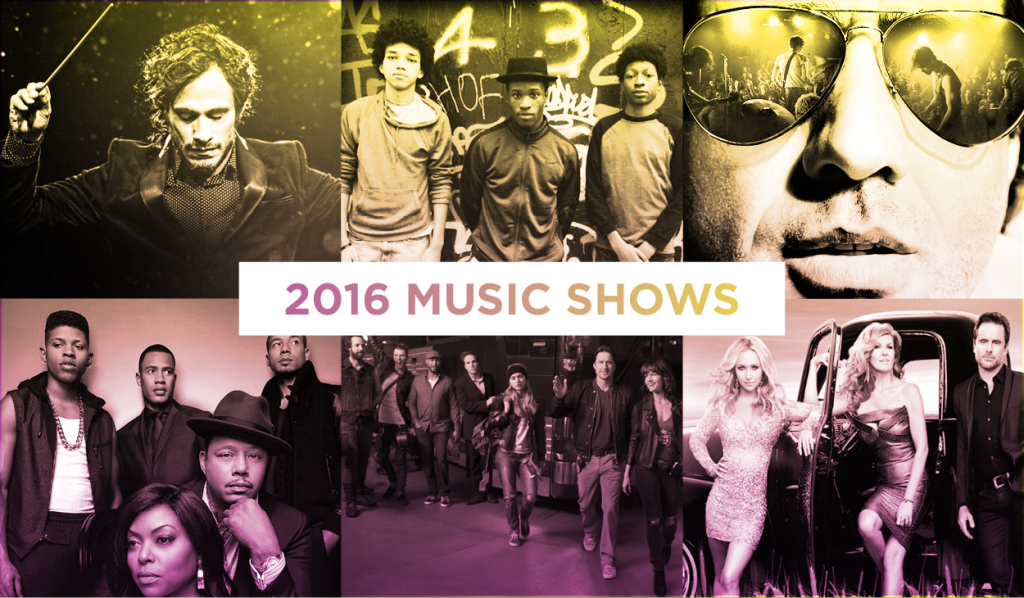 Clockwise: Mozart in the Jungle, The Get Down, Vinyl, Nashville, Roadies, Empire

The popular musical dramedy concluded its sixth and final season last year, but there are plenty of television shows about music currently airing or coming soon!

Co-created and executive produced by Oscar-nominated director Lee Daniels, Empire tells the story of the Lyon family and their fight over the future of their music empire after the head of the family is diagnosed with ALS.The show, currently in its second season, stars Terence Howard and Taraji P. Henson, who recently won a Golden Globe for her role as Cookie Lyon, with music produced by Timbaland.

Vinyl, which aired its first episode this past Sunday, stars Bobby Cannavale as a hard-partying record label president trying to save his company during the seedy early days of punk, disco and hip-hop in 1970s New York City. Originally conceived as a movie by co-creator Mick Jagger in the mid-1990s, the project was eventually developed into a ten-part series with the help of Oscar winner Martin Scorsese, who also directed the two-hour pilot.

Currently in its fourth season, Nashville chronicles the lives of fictional country singers in Music City including Rayna Jaymes (Connie Britton), a former “Queen of Country” now on the decline, Juliette Barnes (Hayden Panettiere), an up-and-coming rival, and Avery Barkley (Jonathan Jackson, who performed at the Levitt AMP Sheboygan Music Series last summer with his band Enation), an aspiring bad-boy musician. Set and filmed in Nashville itself, the show often features songs written by local musicians.

Mozart in the Jungle (Amazon)
Premiered in 2014

Inspired by oboist Blair Tindall’s memoir of the same name, the Amazon original series, which won 2016 Golden Globes for “Best Television Series—Comedy” and “Best Actor in a Television Series—Musical or Comedy,” captures the competitive world of professional classical musicians in New York City. Gael García Bernal stars as Rodrigo De Souza, a dynamic young conductor loosely based on Los Angeles Philharmonic director Gustavo Dudamel (who recently made a cameo on the show).

Fans of Almost Famous will be delighted to hear director Cameron Crowe will return to the world of music with Roadies, a show about the backstage concert crew of a fictional rock band. The series, which stars Imogen Poots, Luke Wilson, Carla Gugino and Rafe Spall, premieres on Showtime on June 26, 2016.

The Get Down (Netflix)

Set in 1970s New York City, The Get Down explores the birth of hip-hop, punk and disco through the lives of a group of South Bronx teens. Created by director Baz Luhrmann, who took 10 years to develop the concept, part one of the series will be released on Netflix on August 12, 2016.

Are you a fan of any of these shows? Let us know!