With over 13 million residents, Mumbai is one of the most densely populated cities on the planet. Between 2013 and 2014 the roads in Mumbai saw 50,000 new vehicles and 94,000 new motorbikes, or “two-wheelers” as locals refer to them. That means that there are now 55% more vehicles in the city than there were seven years ago. With this exponential growth, spaces on the road that were once safe for walking and biking are quickly being squeezed out. For those Mumbaikars without access to a car, this trend presents a growing danger. Approximately 60% of fatal road accident victims are pedestrians. 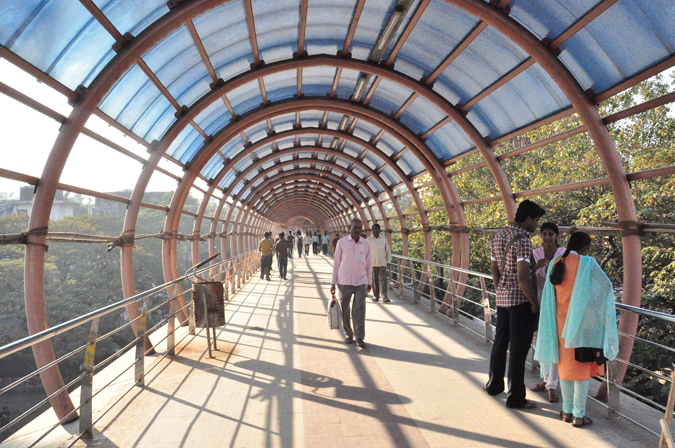 There have been many attempts to address this issue, such as the 2008 creation of the Mumbai Skywalk Project—a series of elevated walkways—and, as of this month, steep increases to public parking fees to encourage the use of public transportation. Some solutions were more out-of-the-box, like BMW Guggenheim Lab’s “Mumbai Lab City Projects”–a series of creative community-driven discussions and projects that aimed to address the lack of public space in Mumbai, redesigning effective and efficient public spaces in the process.

Equal Streets, Mumbai’s citizen-driven open streets movement, promoted by a group of 15 non-government organizations and spearheaded by EMBARQ India—the World Resources Institute (WRI) Center for Sustainable Transport—has decided to address this matter by taking to the streets…literally. Equal Streets was launched in November of 2014 to raise public awareness of the significance of public spaces in Indian cities. This innovative initiative aims “to correct the fundamental imbalance in [their] city’s urban planning priorities.” Each Sunday one side of a 3.7 mile loop of road is closed for cyclists and pedestrians to participate in activities like yoga, aerobics, cross fit, Zumba and street dancing. 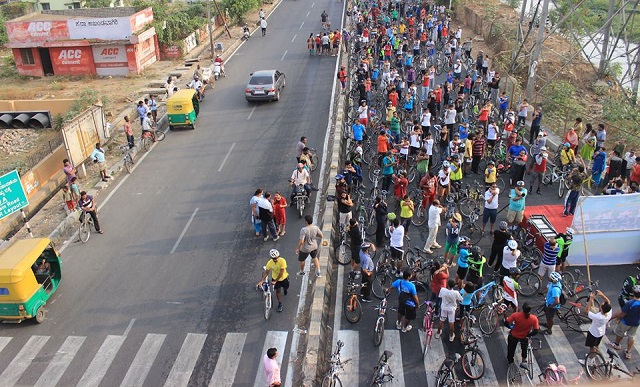 Does this initiative sound familiar? The Equal Streets movement was inspired by the increasingly popular Ciclovía movement; a movement that started 40 years ago on the streets of Bogotá, Colombia and has grown into a worldwide sensation, bringing people into the streets and encouraging improved public transport, cycling and walking infrastructure in cities across the globe. EMBARQ India has already experienced success getting similar projects off the ground in Bangalore, India’s IT capital (as shown in the above image), and in Gurgaon, just outside of New Delhi. In Gurgaon, tens of thousands of pedestrians turn up every Sunday and participants have already seen milestones reached, like new cycle lanes and walking tracks. Participants in Mumbai are hoping for the same success.

Cheers to the Equal Streets participants, coming together and encouraging community interaction and active lifestyles. Together they are helping participants and non-participants alike to envision and create a better quality of life in their city.