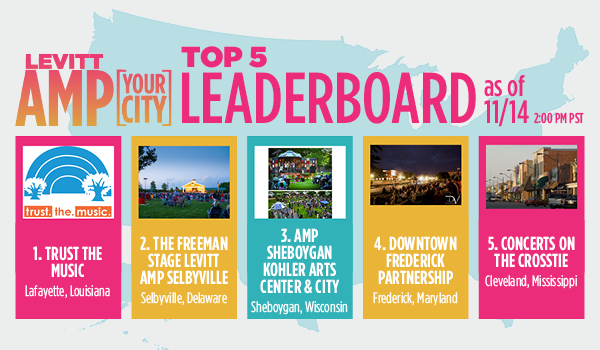 Every summer, free Levitt concerts reach over 500,000 people in six cities across the country: Memphis, Arlington, Los Angeles, Pasadena, Westport and Bethlehem. Seeking to increase our impact even more, we’re spreading the power of arts and creative placemaking beyond major metro areas to places of all sizes.

The application phase has now ended, and reflecting our mission that all Levitt projects be community-driven, we’ve opened up the grant selection process for your votes! Now through November 30 11:59 PM PST, public online voting will help choose the Top 20 Finalists, which will then be narrowed down to 10 final grant recipients by Levitt Pavilions. 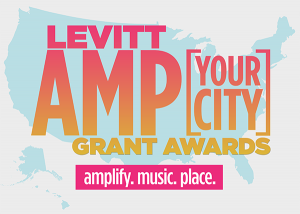 To rally their communities, Levitt AMP applicants have been spreading the word in a number of ways. Many have taken to social media, using Facebook, Twitter, Instagram and more to draw attention to their proposals. They’ve also expressed why they applied in the first place, citing benefits for their entire community. Here are a few we’ve come across:

“To be considered by Levitt for this grant program is a huge honor,” said Patti Grimes, executive director of the Joshua M. Freeman Foundation. “We have admired their work with the Levitt Pavilions around the country for years, and it would be very exciting to be a part of their new community arts initiative in small and mid-sized cities… This opportunity will help strengthen Delaware as the incredible arts destination that it is, while serving those closest to us.”

“The summer concert series promises to be the infusion of energy and excitement that downtown Sheboygan needs and the community wants to see,” said Amy Horst, Deputy Director for Programing of the Kohler Arts Center.

“The concert series will be an opportunity to engage the entire community of Cleveland in advancing the creative place-making and creative economy of this great town,” said Robin Boyles, Director of Delta State University Foundation’s Office of Institutional Grants. “The railroad tracks that used to lie where the Crosstie Walking Trail is now once separated communities, neighborhoods and their people—now people will be coming together. It is fitting to hold a music series in this location as ‘music connects people.’”

If you haven’t already, sign up to vote for your favorite Levitt AMP [Your City] Grant Awards proposal! Individual voters can vote for up to five different submissions, but can only vote for each submission once. Winners will be announced December 15, so stay tuned!