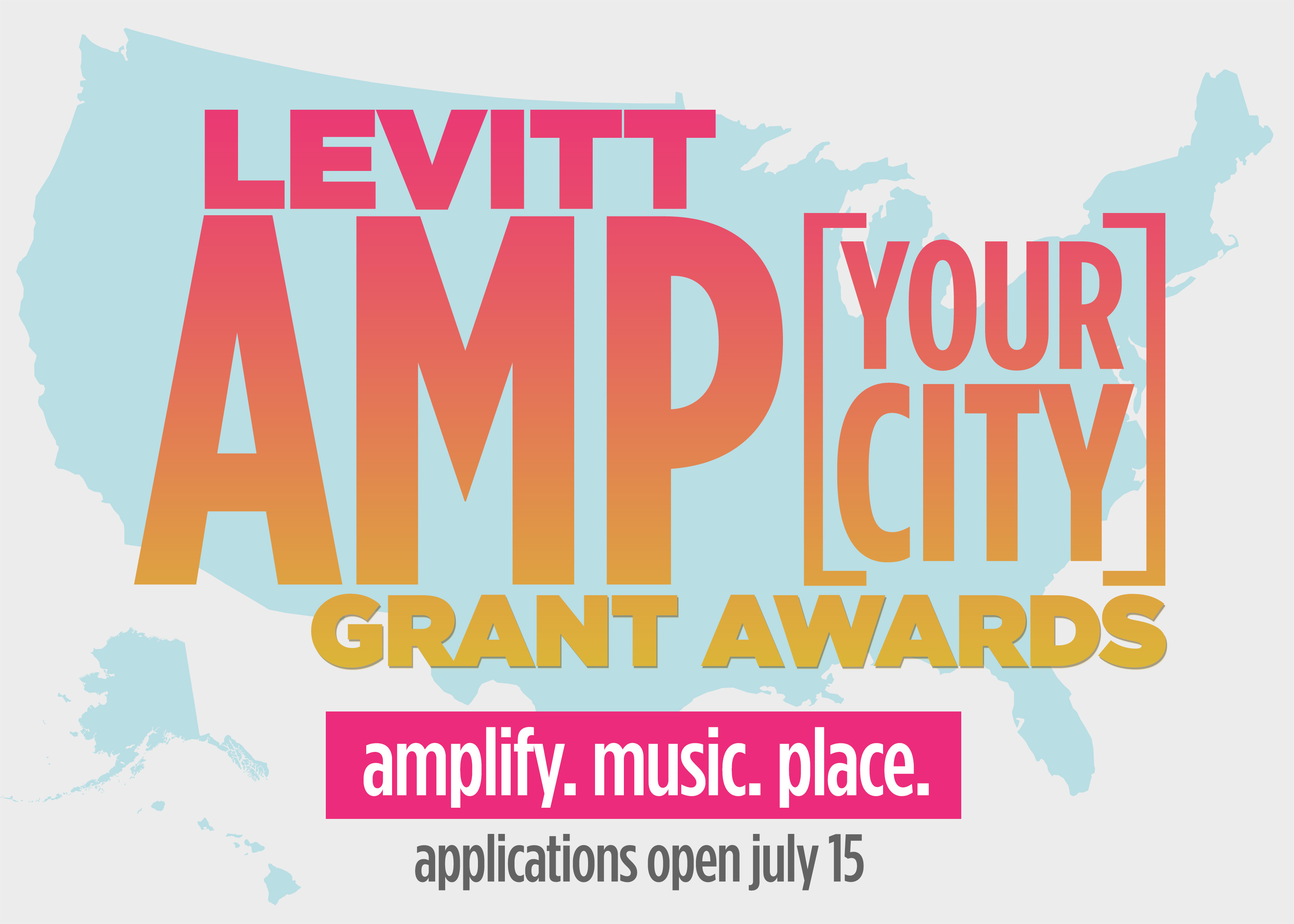 Starting in 2015, Levitt’s national program of 300 free concerts across the country will increase to 400, thanks to an exciting, new matching grant opportunity—the Levitt AMP [Your City] Grant Awards. In addition to 100 more free concerts, Levitt AMP will broaden the geographic impact of the Levitt program by focusing on small and mid-sized cities. And in another first, the public will get to decide which 20 cities make it to the finals round through an online voting process to take place next fall. So get ready to rally your colleagues, friends and family members to vote and bring the joy of free, live music to your city! 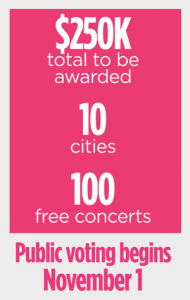 10 U.S.-based nonprofit organizations, or municipalities partnering with a nonprofit, serving cities with metro populations of up to 400,000 will receive up to $25K each in matching funds. With the award, grant recipients will present a new kind of Levitt season featuring at least 10, free outdoor concerts during 2015-16. (This is in contrast to the 50 free outdoor concerts of the signature Levitt program, which takes place in large cities.) The concerts, to be known as the Levitt AMP [Your City] Music Series, will feature a musically diverse lineup of professional artists that will dazzle audiences week after week.

“We are thrilled to bring the spirit of the Levitt program to more cities across our country,” says Sharon Yazowski, Executive Director of Levitt Pavilions. “We’ve witnessed first-hand how people of all ages and backgrounds come together for the free performances, inspired by the music and the welcoming outdoor atmosphere. Levitt concerts create a shared sense of community and connectedness that is incredibly important in today’s world.” 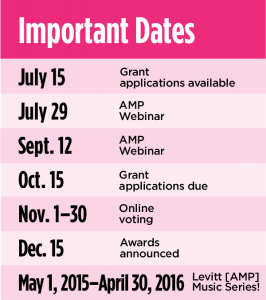 While Levitt’s signature program of 50 free concerts annually is tailored to large cities with metro populations of over 400,000 (due to financial sustainability and audience development considerations), the Levitt AMP [Your City] Grant Awards are specifically designed to meet the needs and capacity of smaller cities. “Over the years, we’ve received numerous calls from small to medium-sized cities, hoping to bring the Levitt program to their communities,” explains Yazowski. “While these cities don’t meet our population requirements for permanent Levitt venues, we believe that these new grants will make a meaningful impact across America, activating public spaces through high quality arts experiences for all to enjoy.”

Applications for the Levitt AMP [Your City] Grant Awards will be available online starting July 15. Since these are matching grants, each applicant must secure a dollar-for-dollar match from other sources such as foundations, local businesses or their municipality. Up to half of the matching requirement may be in-kind, such as donated sound equipment or contributed promotion. Yazowski says the matching grant requirement reflects the organization’s overall commitment that Levitt projects be “community-driven with local support.” The most competitive submissions will depend upon a variety of other factors, including:

Grant applications are due October 15. Following an online voting process during November to select the top 20 proposals, the final 20 will be reviewed by Levitt Pavilions. The 10 selected Levitt AMP [Your City] Grant Awards recipients will be announced December 15 for the 2015-16 calendar year.

Help us spread the word about Levitt AMP and put your city on Levitt’s map!