Levitt’s vision for an America filled with thriving public spaces is one step closer to becoming a reality with recently announced plans to bring the Levitt program to Denver! 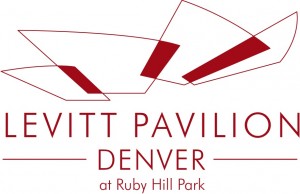 The new Levitt Denver, located in the city’s expansive, 83-acre Ruby Hill Park just minutes from downtown, will be the seventh Levitt performance venue across the nation, joining the cities of Los Angeles; Memphis; Arlington, Texas; Bethlehem, Pa.; Pasadena, Calif.; and Westport, Conn. As part of the Levitt network, Levitt Denver will present 50 free concerts annually in a state-of-the-art outdoor venue open to all, featuring acclaimed, emerging talent to award-winning artists in a diverse range of music genres. The welcoming open lawn setting will be perfect for lawn chairs and picnics. Construction is expected to break ground in 2015, with free concerts to begin wowing Denverites in spring 2016.

Liz Levitt Hirsch, Board Chair of Levitt Pavilions, is thrilled that the new Levitt Denver will contribute to the city’s forward momentum. “As one of the healthiest cities in America, Denver is a perfect fit for the Levitt program, which is dedicated to building healthy, thriving communities through the power of free, live music.”

The public/private partnership is being driven by the City and County of Denver and a local nonprofit Friends of Levitt Pavilion Denver, led by Executive Director Chris Zacher. Well known among locals for his role as Board President of the popular free jazz series, City Park Jazz, Zacher and his staff will manage the Levitt Denver venue, program the 50 free concerts each year, and raise funds to support operations and programming.

The origins of Levitt Denver date back to 2009 and point to the powerful word of mouth at work in spreading the message about Levitt’s social and economic impact in cities. Gordon Robertson, the Director of Planning for Denver’s Department of Parks and Recreation, suggested the Levitt program to a colleague who was searching for the right partner for a proposed outdoor performance venue in the city’s Ruby Hill Park, which was undergoing significant improvements as part of a recently completed Master Plan to revitalize the park.

While boasting the city’s highest elevation with breathtaking views of the skyline, the 80-acre Ruby Hill Park nevertheless had a history of being underused, save for the winter months when its steep hill became a popular spot for sledding. Robertson knew first-hand the power of the Levitt program, having moved to Denver from Arlington, Texas—where he worked in the Parks Department and witnessed the Levitt Pavilion in Arlington help transform the city’s dormant downtown into a thriving destination. He believed the long-term partnership with Levitt Pavilions, which had a proven track record of successful public/private partnerships, guaranteed a minimum of 50+ free concerts each summer, and provided significant support to local Levitt venues for operations, would be just the thing to transform Ruby Hill Park into a vibrant summer destination as well.

The rest, they say, is history! Levitt Pavilions Executive Director Sharon Yazowski received a call from Denver’s Department of Parks and Recreation and Councilman Chris Nevitt’s office, and she immediately recognized the City of Denver as a great potential partner. “Three factors made it clear that Denver was an ideal partner—the location of Ruby Hill Park with its surrounding diverse neighborhoods, the opportunity to play a key role in the park’s transformation, and the City’s commitment to revitalize Southwest Denver, combined with impressive leadership. All of these pointed to Denver being an exciting choice for Levitt’s seventh venue.”

During the next year and a half, Yazowski guided the conversations as interest from the local government and philanthropic communities intensified. Councilman Nevitt hailed the Levitt partnership as a “bold investment in community resources.” Adding to the momentum, last fall Levitt Denver received a major boost when Mayor Michael B. Hancock recommended it receive $2 million toward capital costs from the Better Denver Bond Program, and The Greenway Foundation also pledged its support. By the end of 2012, Friends of Levitt Pavilion Denver had a stellar board of directors and named Zacher as its founding Executive Director. In March 2013, Levitt Pavilions committed its capital seed funding of $400K, and solidified its pledge of $800K for the first five years of operation, launching Levitt Denver’s $4 million capital campaign into full swing.

When it opens in 2016, Levitt Denver is poised to become the crown jewel of Ruby Hill Park’s revitalization project and a citywide destination for all of Denver—kids, families, neighbors, singles and seniors—to enjoy.

2 thoughts on ““Mile High City” of Denver Will Be Home To Seventh Levitt Venue!”