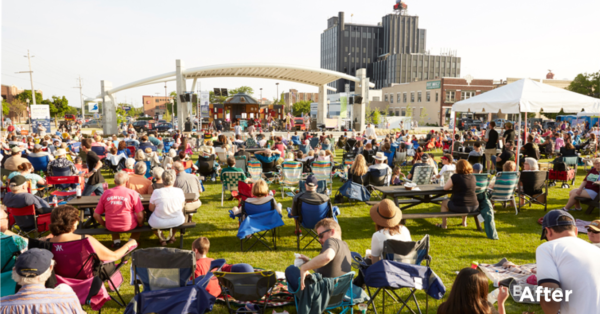 For the past five summers, Thursday nights in the town of Sheboygan, Wis., have become synonymous with community and free, live music under the setting sun. “It’s this feel-good moment of coming together, as everyone knows that’s the night of the Levitt AMP Sheboygan Music Series!” says Angela Ramey of the John Michael Kohler Arts Center (JMKAC), the nonprofit behind Levitt AMP Sheboygan.

And so it’s fitting that tonight, Thursday June 25, marks Levitt AMP Sheboygan’s entry into the 2020 Levitt AMP Virtual Music Series with the exhilarating brass and street funk fusion of Chicago-based LowDown Brass Band, plus an opening set by Florida-based R&B soul artist CeCe Teneal. The concert, recorded live last summer during the Levitt AMP Sheboygan Music Series, was a natural choice for Ramey and her fellow Levitt AMP Sheboygan organizers. “It was such a joyful and uplifting night of music that was truly a shared experience between the artists and our audience,” explained Ramey. “There was something for everybody.”

END_OF_DOCUMENT_TOKEN_TO_BE_REPLACED

Steeped in centuries-old traditions and songwriting, bluegrass is a discipline as much as it is a musical genre. It’s rare to hear artists that break the mold. But Billy Strings – one young, steadfast Mid-Westerner, has recently exploded onto the Americana scene and caught the ear of many veteran musicians with his punk-rock spirit, arresting voice and sheer virtuosic ability with guitar and banjo. Recently named as one of the “10 New Country Artists You Need to Know” by Rolling Stone, audiences at Levitt AMP Sheboygan will experience the up-and-coming talent of this bluegrass and folk maestro this Thursday at 6PM, at the John Michael Kohler Art Center’s Festival Green!