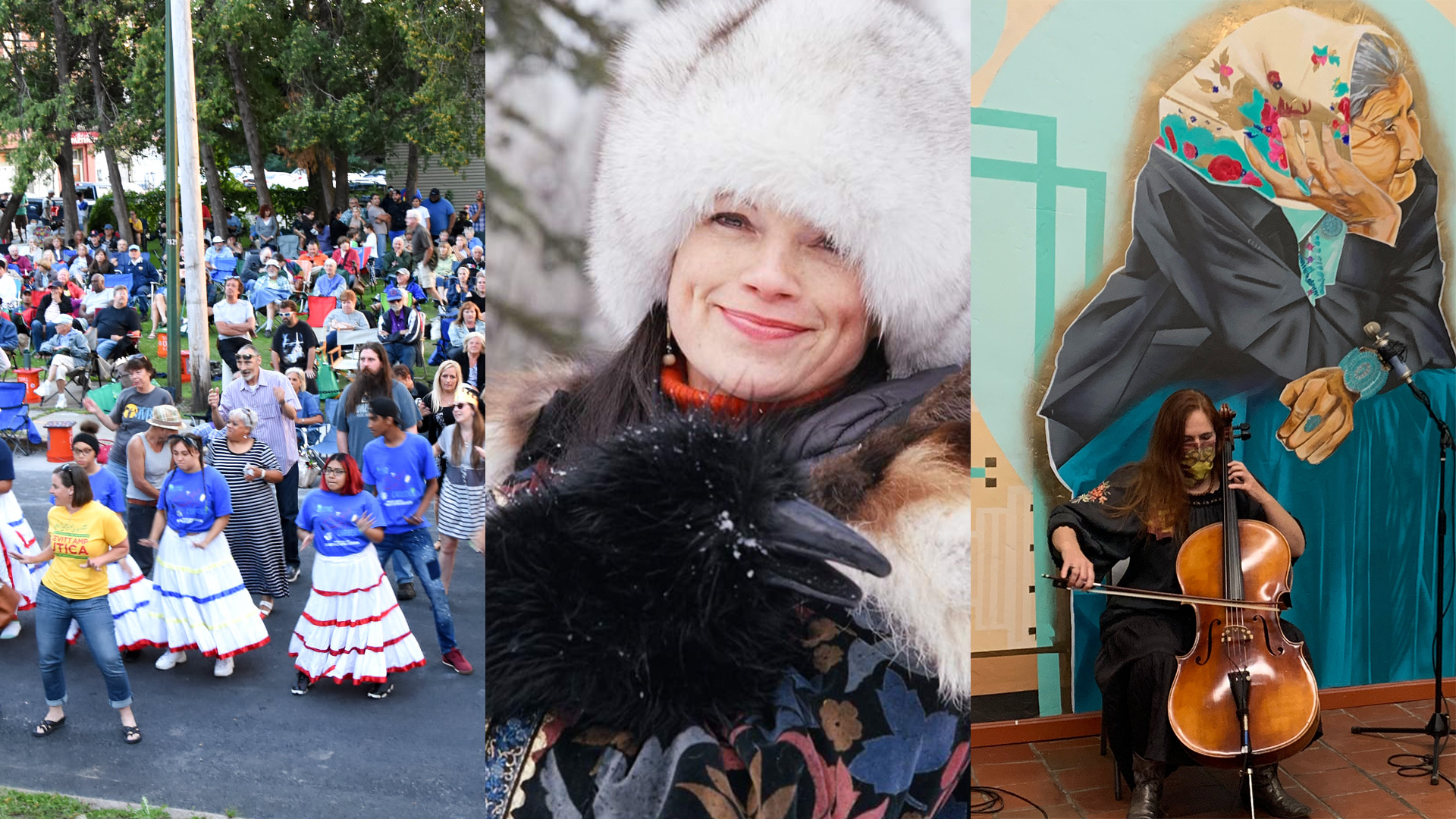 The COVID-19 pandemic has disproportionately affected communities of color. Gallup, a small town of just over 21,000, is surrounded by the vast Navajo Nation where more than 40 percent of the population is Native American. The town and surrounding Navajo Nation were hit hard by COVID-19, and for a time Gallup was the epicenter of the pandemic in this country. Last summer was supposed to mark the inaugural Levitt AMP Gallup Music Series, but the concerts were cancelled due to the pandemic. While case numbers have declined since then, the Executive Director of Gallup Main Street Arts & Cultural District, Kara Q. Smith, is sensitive to the lingering effects of the pandemic on the community. 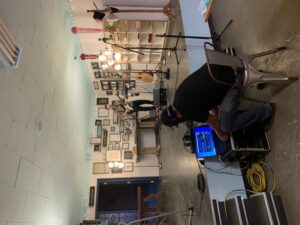 For Smith, the key question for planning this summer’s Levitt AMP Gallup Music Series was: “How can we be responsive to coming out of the pandemic?” A major consideration was determining whether to proceed with virtual versus in-person programming. While other Levitt venues and AMP sites are back to presenting in-person concerts, Gallup’s incredibly challenging journey with COVID-19 means many residents are not yet ready to return to pre-pandemic life. Thus, the inaugural 2021 Levitt AMP Gallup Music Series, which kicks off August 12, will be a mostly virtual experience, with limited in-person audiences for the concerts taking place indoors at the historic El Morro Theatre in downtown Gallup.

In addition to programming Native artists for the series, part of the nonprofit’s efforts to reach out to the Native American communities in Gallup and the wider Navajo Nation, is to leverage the power of radio. “Radio is one of the primary forms of communication here,” said Smith, as she explained the impetus behind “utilizing radio as a key way to promote the series both in Navajo and in English.” The hope is to incorporate both radio broadcasts and livestreaming into this year’s series, and reach not just a local audience, but a regional—and perhaps national—one, too.

But above all, what is crucial to the team behind Levitt AMP Gallup is repairing and rebuilding community pride. “Community pride is important, and that certainly took a hit during COVID,” after months of isolation and high case numbers, said Smith. It’s important to give community members a greater sense of ownership, “so that the community feels like this is their concert series.” In line with this, the opening acts for all the headliners will be local performers who can sign up to perform.

Ultimately, Gallup Main Street Arts & Cultural District believes that there is no better way for Gallup to embark on rebuilding community than through music. “Arts and culture are so important for our community,” Smith said.  “[There are] many different forms of making and creating in culturally significant ways that carries on histories and…traditions.”

Be sure to check out Gallup’s upcoming series, kicking off with Felix Y Los Gatos on August 12, featuring a unique blend of zydeco, Tex-mex, blues and jazz. You can also look forward to the dynamic Albuquerque-based Black Native band Lindy Vision, a synthpop sister trio, on September 2. Shows will be streamed via Facebook and YouTube.

Youth Empowerment in a Refugee Community 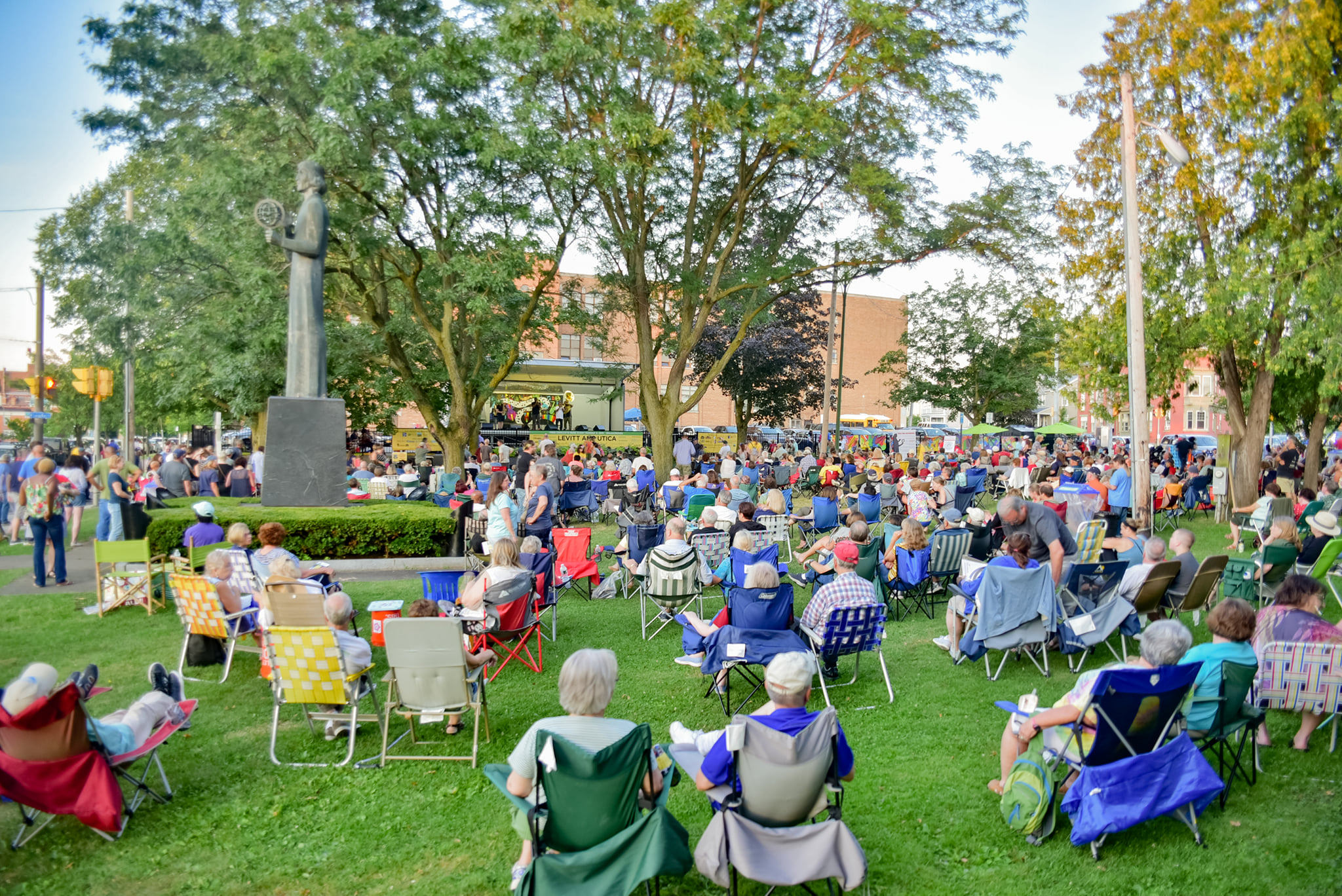 Levitt AMP Utica joined the Levitt AMP community with its inaugural series in 2016. Situated in New York’s Mohawk Valley, the city of Utica is just a stone’s throw from the Mohawk River, the Adirondacks, and various other natural attractions. The city itself is ethnically diverse, with significant Black, Latino and Asian populations. Many in the local community have supported and attended the concert series, and according to Levitt AMP Utica program coordinator Michelle Truett of the nonprofit Utica Monday Nite, participation of the refugee community has continued to grow since the launch of the series.

Youth empowerment as a longer-term approach to community building is evident in Truett’s work with refugee youth in Utica, who intern or work not just for Levitt AMP Utica, but also participate in other arts-related projects such as public art installations and spoken word events in the community. “I call it ‘fostering youth’…whether it’s a singer, a photographer, someone who [works] with us in the production of [Levitt AMP Utica],” says Truett.

Youth refugee interns are involved in big, high-impact activities, helping Levitt AMP Utica continue to build a relationship with the refugee populations based on trust and respect. In addition to the youth intern program, Levitt AMP Utica has brought in many youth musicians from the refugee community to perform during intermissions. These performances have represented a range of genres, from a Karen hip-hop group to solo spoken word. Refugee youth have also been involved in visual art projects for Levitt AMP Utica, such as Doe Kpaw So Paw and Eh Pleh Hsoe’s work on creating cultural tiles and fabric wraps for trees incorporating designs and fabrics from many cultures. “It makes me happy that I’m able to be a part of creating something for Levitt AMP Utica [that]… brings out something bright and new to the park and showcases our diverse community,” says Kpaw So Paw.

The Levitt AMP Utica Music Series began earlier this month and runs through September 23, back in person at Kopernik Park. This year’s featured artists include soul singer and former public defender Danielle Ponder, and jazz group the Samara & Pasquale Grasso Duo on July 26. All shows will also be livestreamed on Levitt AMP Utica’s Facebook page.

Negotiating Challenges of Culture and Space 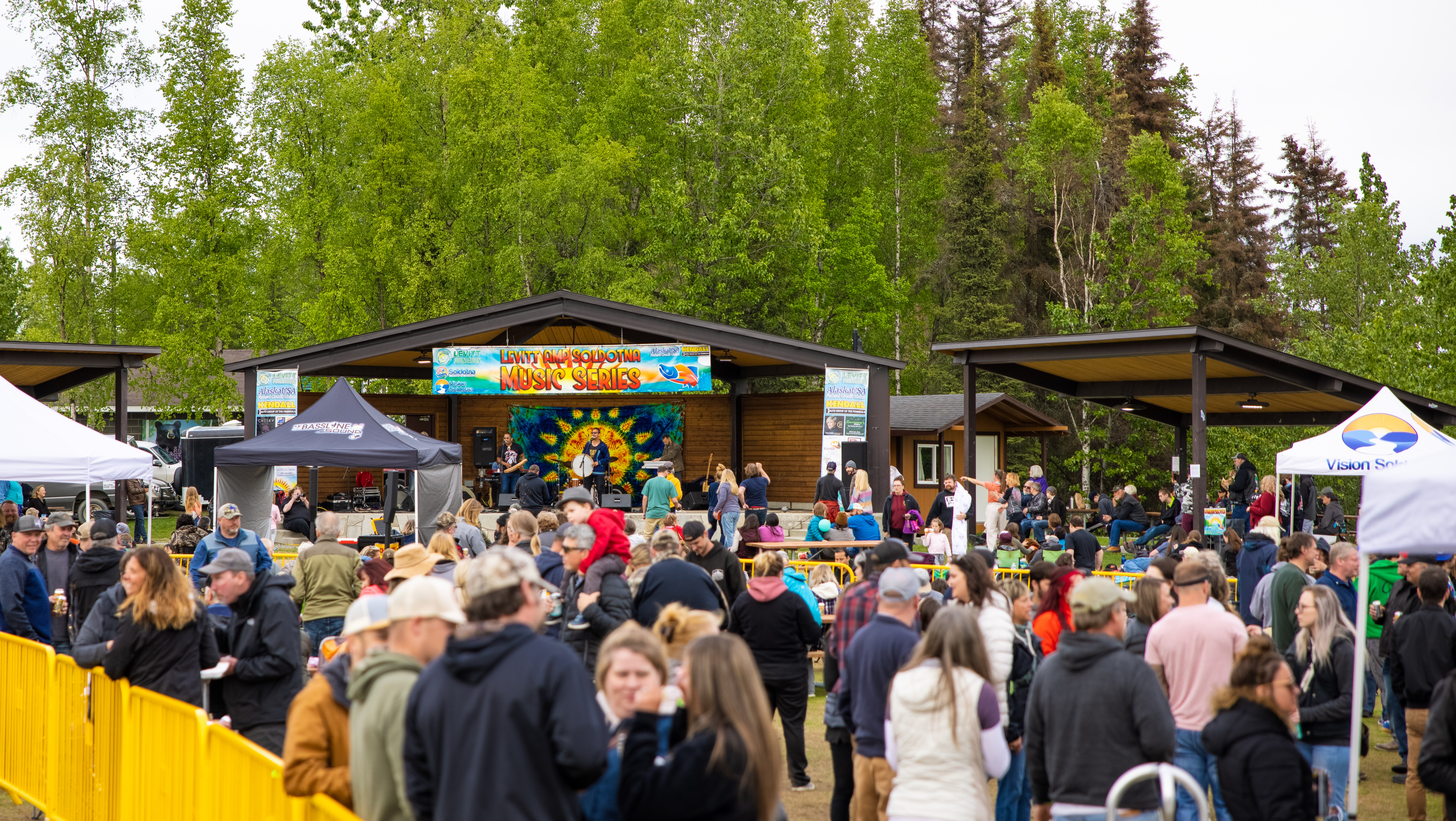 Situated in the heart of Alaska’s Kenai Peninsula, the location and culture of the small town of Soldotna poses unique opportunities and challenges to the team behind Levitt AMP Soldotna.

While Soldotna’s physical location makes it ideal for experiencing nature and recreation, Mary McCubbins of the nonprofit Vision Soldotna shared that prior to receiving the Levitt AMP grant, its remote location made it “really tough to find a lot of bands that vary” in genre, as they were often limited to groups who perform locally. With the Levitt AMP grant, there is now a balance of local performers and regional acts for their summer concert series.

While Alaska Natives make up about five percent of the Soldotna population, prioritizing their voices, histories and cultures has been an important part of making reparations for violence against Native communities in Alaska’s past and bringing the Soldotna community together. This summer’s Levitt AMP Soldotna Music Series features many Native performers and provides a platform to connect with the wider Soldotna community, a priority for Levitt AMP Soldotna. McCubbins spoke of a recent concert on June 9 by beloved Inuit soul band Pamyua, for whom local folk singer and Kenaitze Indian Tribe member Bunny Swan was the opening act. McCubbins recalls a teenage boy in the audience, the only one who could sing all the words of their songs alongside the band in their native tongue, Yupik. “That’s why we’re doing this…we want that [teen] showing up and knowing that he’s represented, not just for himself…but to our whole community…and that there’s respect there and appreciation and love,” she said.

“People desperately missed music in the park,” added Davis, and Levitt AMP’s return to Soldotna Creek Park is akin to a lifeline to people who want to connect with their community, face to face, through music. Levitt AMP Soldotna’s in-person concert season is taking place through August 25. Upcoming highlights include Arizona-based rock band Zero Miles to Empty on July 21, Alaskan avant-garde electronic rock duo Ayla Ray on August 18, and Alaskan folk-rock favorite Denali Cooks closing out the series on August 25. 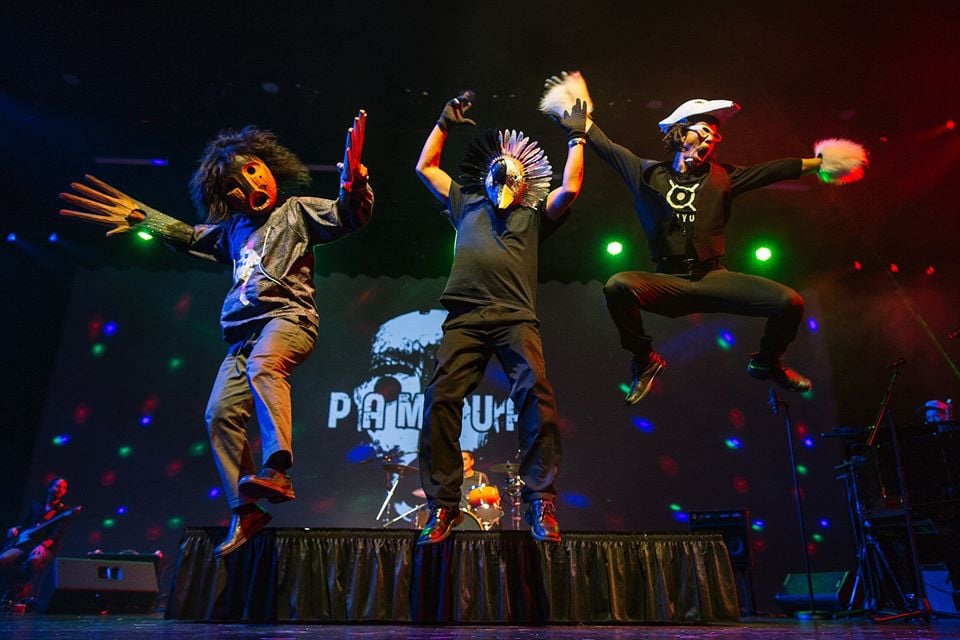 Each of these Levitt AMP sites—by virtue of their distinct physical location and demographics— have varying approaches to fostering an inclusive atmosphere at their concerts, where members of their entire community can feel welcome. They all share a common mission of building community through music, strengthening feelings of belonging through the medium of live music while sharing space and gathering with others. We’re excited to see Levitt AMP Gallup, Levitt AMP Utica and Levitt AMP Soldotna continue to champion this mission through their dynamic music series!