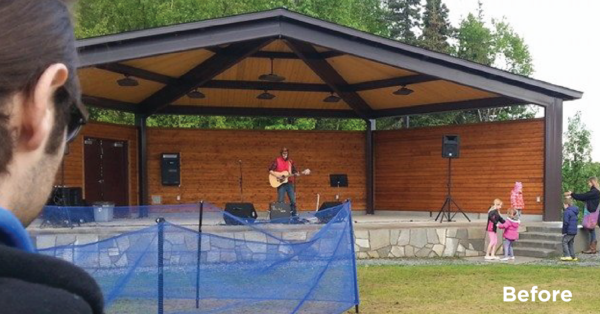 Tonight, the Levitt AMP Virtual Music Series continues with an all-new virtual concert featuring Alaska favorite bluegrass and folk-rockers Blackwater Railroad Company, co-presented by Vision Soldotna, the nonprofit behind the Levitt AMP Soldotna Music Series. Formed in the small Alaskan town of Seward in 2012, Blackwater Railroad Company weaves the tapestry of the state’s musical landscape into songs that “consistently get people dancing and smiling, united in a love of live music and Alaska,” says Mary McCubbins of Vision Soldotna. The free concert airs tonight at 8pm EDT/5pm PDT at levittamp.org/virtual.

“The Good Land”
Located in the heart of Alaska’s famed Kenai Peninsula, the small town of Soldotna (population 4,689) is best known for its bountiful salmon streams and outdoor recreation opportunities, attracting visitors from all over the world as well as other Alaskan communities. In 1985, local resident Les Anderson set a world record when he and a friend caught a 97-pound King Salmon in the Kenai River that runs through town. No wonder the area is known as “the good land,” or yaghanen by the Native Kenaitze Indian Tribe.

While breathtaking scenery and wildlife wonders are aplenty, for many years Soldotna lacked a cohesive center and was more of a “drive-through community with strip malls and dirt parking lots,” according to lifelong resident Shanon Davis. That started to change in the mid-1980s, when a group of passionate locals successfully rallied the City to begin transforming a contaminated, former maintenance storage yard along the banks of the Kenai River in the center of town into a new green space. Following initial infrastructure improvements and a community-led master planning process, it took several decades before the final phase of Soldotna Creek Park was completed in 2014. Embraced as the “community’s backyard,” the 8-acre Soldotna Creek Park soon became the place for community events, and in 2015, its outdoor amphitheater became home to a free, summer Music in the Park concert series produced by Soldotna’s Chamber of Commerce, featuring mostly local acts attracting about 80 people per show during its first summer, eventually growing to nearly 500 people per show by 2018. Music in the Park took place on Wednesdays, and coincided with Wednesday Market, a weekly artisan fair and farmer’s market featuring over 100 vendors and food trucks that had become a staple in the community.

Davis, who had spent much of her career fostering awareness of the region through roles in tourism and marketing, was named executive director of the Soldotna Chamber of Commerce in 2017. While researching grant opportunities, she came across the Levitt AMP grant in 2018 and thought it could help elevate Soldotna’s existing Music in the Park series, especially its ability to book high-caliber artists. She also believed Levitt AMP would be a perfect project for a new nonprofit, Vision Soldotna, given its mission to build a more inclusive and welcoming community. Created as a subsidiary of the Chamber, Vision Soldotna’s main focus up to that point had been to realize the decades-long goal of raising funds to create a new Visitor Center in the center of town.

“Never could have imagined…”
Even before winning the Levitt AMP grant in 2019, Davis noticed a big shift in the community that fall, during the online public voting phase to determine the Top 25 Levitt AMP finalists. “There was this excitement from the community coming together and voting,” she says. “Levitt AMP became a rallying point. And then we won! The community pride was immense. People felt a sense ownership in winning a national grant.” 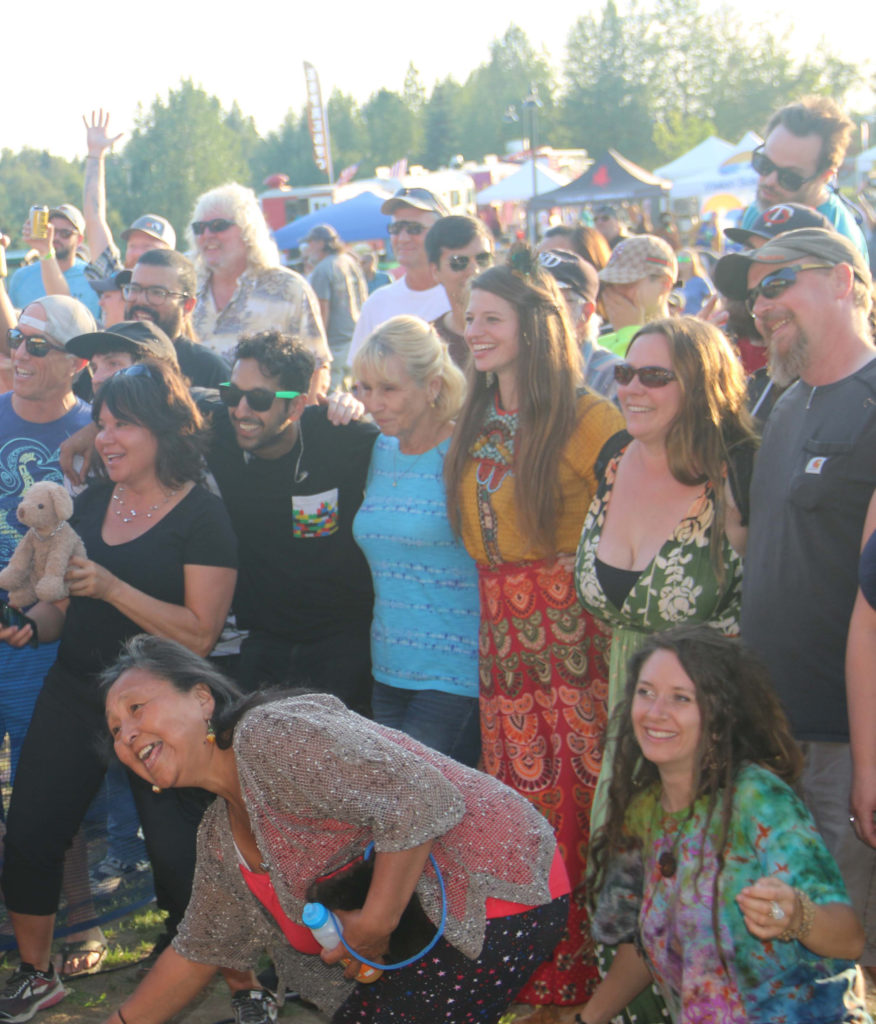 Like a pebble rolling down a hill, Levitt AMP Soldotna continued gaining momentum leading up to the concert series, attracting new sponsors, opening the door to bigger-name artists who otherwise “would never consider performing in our small town,” and enthusiastic and sustained media coverage including weekly news stories. The result? Levitt AMP Soldotna enjoyed over 1,000 people per show last summer, more than double from previous years, attracting a mix of locals and tourists of all ages and backgrounds who also visited local establishments, businesses and vendors before and after each show. “To our amazement, we had to redo the layout of the park because so many people came to Levitt AMP shows,” says Davis, noting that concertgoers traveled from as far as 40 miles away.

With the Levitt AMP grant’s focus on inclusivity and engagement, Vision Soldotna was able to curate a more diverse lineup of artists and music genres, which in turn, attracted a much broader range of people to Soldotna Creek Park. “Levitt AMP elevated the series in a way that I never could have imagined,” explains McCubbins. “Our demographic is mostly Caucasian and middle-aged. We have a small Native and Black population, yet we saw an explosion of them coming out to Levitt AMP shows and engaging with the rest of the community because we were able to hire bigger bands that represented every segment of our population.” As an example, in 2019 Levitt AMP Soldotna presented the celebrated Alaska Native band, Pamyua, “the most famous Inuit band in the world,” (Rolling Stone – Italia), which they wouldn’t have been able to do without additional funds from the Levitt grant.

“It almost makes me tear up, thinking about what we’ve been able to do through the power of live music and the arts, bringing everyone together on that lawn that used to be a DOT gravel lot,” says Davis. “It’s a testament to what can be done when people have a shared vision.” 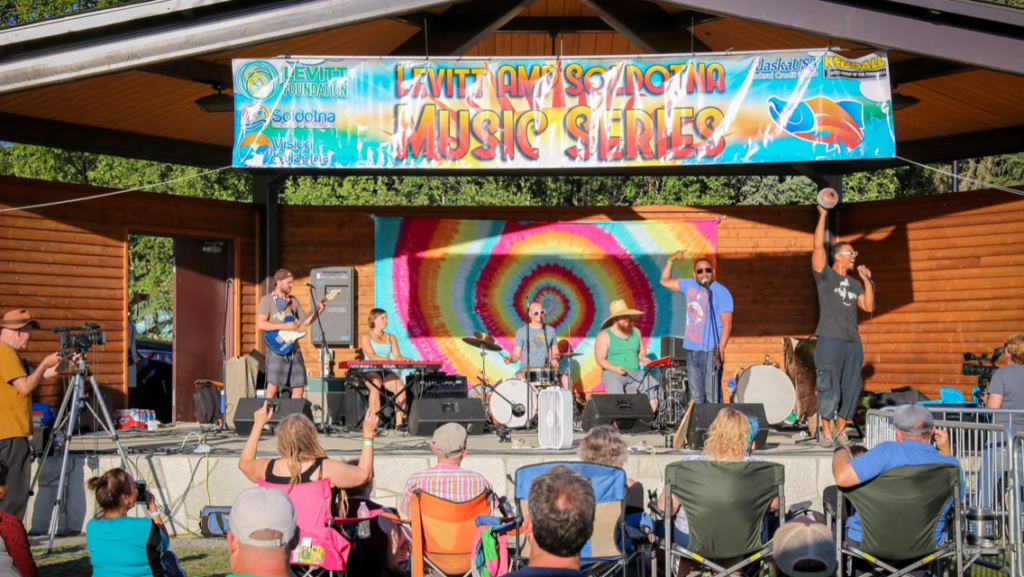 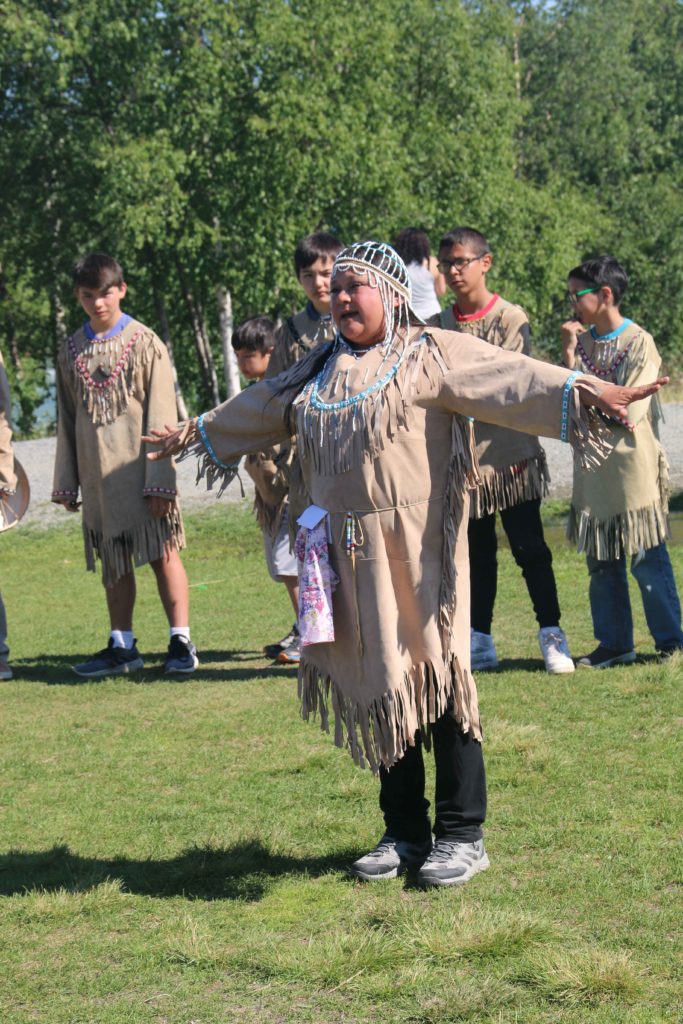 For the Pamyua show, Vision Soldotna also partnered with the Kenaitze Indian Tribe to present a Native dance performance. McCubbins explains that historically their relationship has been challenging to navigate, due to mistrust resulting from a painful history in which Native Alaskans have been marginalized, displaced and ignored. “I grew up here, went to school here, and I knew none of this history or the tragedy that took place because it wasn’t talked about,” says McCubbins. “Now, we have a platform to repair those bridges with the Kenaitze Indian Tribe and try to honor their heritage while building a community that is truly inclusive.”

A record number of Native Alaskans came out to the Pamyua show. And in the weeks that followed, McCubbins noticed their continued presence at Levitt AMP shows. “We were able to create that welcoming environment, and it was just beautiful.”

The Levitt AMP grant also helped nurture the local artist community, motivating musicians who normally perform covers to compose original songs. This past year, two local Kenai Peninsula bands began writing their own material so they could be considered for the Levitt AMP Soldotna Music Series. “Levitt AMP has become an incentive for artists to create their own original music,” says Davis. “When you are in a community of incredible musicians who perform almost exclusively covers, this is an amazing development.”

A shift in approach during COVID-19
Having made tremendous impact during 2019, Vision Soldotna won a Levitt AMP Grant for the second year in a row in 2020. “The community was so pumped, and they kept asking ‘When is our series returning?’” says Davis.  So it came as a disappointment to many when Vision Soldotna announced in early May that it was cancelling the 2020 Levitt AMP Soldotna Music Series due to COVID-19. Initially, the nonprofit had hoped to keep the music playing by focusing on local artists, however public safety guidelines prompted Davis and McCubbins to shift their approach in the midst of ongoing uncertainty.

During the past few months, Vision Soldotna has focused on helping local businesses find where they can apply for relief grants, as well as directing attention to cultural events that are still open and need support, including Wednesday Market. They’ve also been sharing resources with musicians and connecting them to performance opportunities that are still available. Currently, Vision Soldotna is in the early stages of planning an arts event that will safely bring the community together later this summer as part of a Levitt AMP Bridge Grant, so stay tuned!

In the meantime, be sure to tune in for tonight’s free virtual show featuring Blackwater Railroad Company at 8pm EDT/5pm PDT, at levittamp.org/virtual!