The Polyphonic Spree at Levitt Arlington.

It’s not hard to believe that Levitt Pavilion Arlington attracted folks from across state lines, especially with shows like country/rock songwriter Chip Taylor (May 31), eight-time GRAMMY-winning Western swing band The Light Crust Doughboys (June 22) and a cappella sensation and hometown favorites Pentatonix (August 31). This eclectic mix of music and fun smashed previous attendance records, attracting over 123,000 concertgoers and prompting the Dallas Observer to name Levitt Arlington one of the top five outdoor venues in North Texas!

Opening Levitt Arlington’s fifth year of free concerts, the Memorial Day weekend attracted 16,000 festivalgoers out for singer-songwriter Sarah Jaffe (May 24), indie psych-pop choir The Polyphonic Spree (May 25) and alt-country pioneers Old 97’s (May 26) as part of the 2nd Annual Downtown Arlington Center Stage Music Festival. A special partnership with the University of Texas-Arlington made for some early Fall semester fun on College Night with the folk-pop sounds of Seryn (September 6), and the university jazz band surely won’t forget jamming out with GRAMMY-winning percussionist Joe McCarthy (September 22). Six-time GRAMMY-winning country legend Ronnie Milsap (September 27) graced the stage during closing weekend for a packed house, making it an evening to remember.

Levitt Pavilion SteelStacks just finished its third season with record attendance! Crowds from Pennsylvania’s Lehigh Valley and beyond vibed to bluegrass, jazz, country and classic rock. Due to audience demand—and paying homage to the heritage of band shells across the country—Levitt SteelStacks expanded its jazz and big band offerings with groups like Jump City Jazz Orchestra (June 15), No BS! Brass Band (June 29) and Dandy Wellington and His Band (August 30). Santa Mamba’s (June 20) Latin music meets classic rock fusion at the ¡Sabor! Latin Festival was a huge hit, and hometown favorite, Martin Guitars-sponsored Craig Thatcher Band (July 6) brought out one the one of the biggest and highest energy crowds of the season.

Doggie socials and weekly pet pack giveaways made the Levitt SteelStacks’ Pet Park the place to be for canines and their music-loving human friends. And keeping true to its community roots, Levitt SteelStacks partnered with 21 local nonprofits throughout the season, highlighting the work of organizations like the American Red Cross, the no-kill animal shelter Animals in Distress and the Appalachian Fiddle and Bluegrass Association before and after shows.

Since 2007, over a quarter million people have visited Levitt Pavilion Los Angeles for evenings of live music in the heart of the city. This year, thousands of concertgoers extended their evening Levitt outings, arriving early to participate in free art workshops, pre-show music and dance performances!

Levitt L.A. kicked off its season with a historic performance by multiple GRAMMY-winning songwriter Jimmy Webb (June 15) performing his classic hit “MacArthur Park” in MacArthur Park for the first time in the song’s 45-year history! Music aficionados from all over the city flocked to Levitt L.A. for the special performance featuring Webb at a grand piano, and the evening generated considerable media coverage, including a cover article in the LA Times. 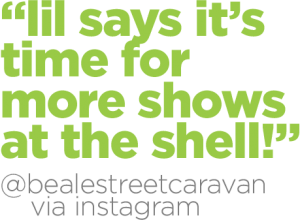 Fans of the Levitt Shell Memphis wanted more concerts, so the Levitt Shell obliged, extending its season with more shows! The season featured local favorites North Mississippi Allstars (May 23) and up-and-coming garage soulsters St. Paul and the Broken Bones (August 31). The season made for the highest audience numbers yet and earned the Levitt Shell the title of Best Place to See Live Music in Memphis by the Memphis Flyer for the second year in a row!

It was a historic night when Lisa Marie Presley (September 21) played at the Levitt Shell—almost 50 years earlier, her famous dad made his professional debut on the same stage, then known as the Overton Park Shell! “Surprise at the Levitt Shell” (August 15), a bonus concert held between the summer and fall seasons, featured a surprise appearance by the incomparable, multiple GRAMMY-winning Norah Jones who crooned to a rapt audience alongside roots rocker Cory Chisel and his Johnny Cash-loving bandmates on their “Wild Rovers Tour.” Memphis is well known as a musical melting pot, so when legendary Stax Records singer John Gary Williams paired up with Opus One, a project of the Memphis Symphony Orchestra (September 28), it made for an extraordinary evening of orchestral soul. And the Levitt Shell continued its popular film series in partnership with Indie Memphis, closing with “Big Star: Live in Memphis” (August 24) for riveted fans of the quintessential Memphis power pop group. 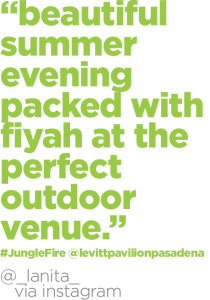 It was a picnic-filled summer at Levitt Pavilion Pasadena, where a mix of up-and-coming and award-winning musicians drew area residents to Memorial Park night after night! Before the show, families found face painting and interactive fun in the KidZone. And the Luckman World Arts Stage—a unique sidestage among Levitt venues that features entertainment and activities before the main concert every evening—attracted people of all ages to hear local talent, dance Zumba or participate in the ever-popular Open Mic Series. All of this made for an extraordinary season, leading readers of Pasadena Weekly to vote Levitt Pasadena Best Live Music Venue in the city for the fifth year in a row!

The broad mix of musical styles presented on Levitt Pasadena’s stage reflected the international backgrounds of this summer’s artists, who hailed from 11 countries covering five continents. Folk music runs in the family for Sarah Lee Guthrie, who, with Johnny Irion (July 10), brought a new take on Americana with special sing-alongs for kids. The GRAMMY-winning, all-female Mariachi Divas (August 17), a Levitt audience favorite, returned to the Levitt Pasadena stage for a fifth time with a multicultural celebration of music and dance. And L.A.’s own Jungle Fire (August 4) invited concertgoers on stage to move to Afro-Latin funk rhythms into the night. 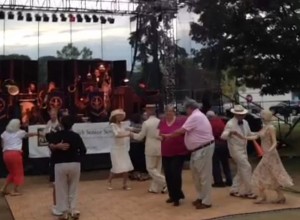 Vince Giordano and the Nighthawks brought out the Westport swing dancers to the Levitt. Click on the photo to see them in action!

Still going strong after four decades, the original Levitt Pavilion for the Performing Arts (Levitt Westport) thrilled concertgoers in Connecticut with a phenomenal 2013 season. Since the 1970s, they’ve welcomed ONE MILLION guests under the stars, and with construction underway for a new pavilion, the first LEED Certified Levitt venue, they’re prepping for the next million.

Have a favorite concert, picnic must-try or special event from the 2013 Levitt concert season? Let us know YOUR highlight. We’ll see you in 2014!