Last spring, when Levitt AMP grantees postponed their in-person concert series due to COVID-19, the Levitt Foundation created the Levitt AMP Bridge Grant, a mini-grant of up to $5k to support community-building projects and foster connections during this time of crisis and uncertainty. We were inspired by the creativity and innovative thinking of Levitt AMP grantees, creating projects ranging from free food giveaways, to mobile concerts, to beautiful new public art installations.

Over the next several weeks, we’ll be sharing stories about individual Bridge Grant projects, and the impact they had on the community, here on our blog. To launch the series, and in honor of Black History Month, we’re highlighting two projects with a specific focus on Black History: an educational guide to a mural celebrating local Black history in Ocala, Florida, which is now being used as a teaching tool in the city’s public schools, and a Black History Month virtual concert in Merced, California, streaming live from the historic Merced Theatre this Saturday. 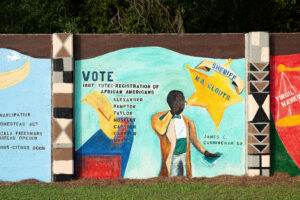 In 2005, Marion Cultural Alliance, the nonprofit behind the Levitt AMP Ocala Music Series, commissioned a group of seven student artists to paint a mural celebrating the city’s Black history on a concrete wall near Webb Field, the future site of the concert series. After enduring years of tropical weather, the mural was in need of a touch-up, and in 2019, in conjunction with the Levitt AMP Ocala Music Series, a new generation of young artists restored it and added several new panels. Each part of the mural explores an aspect of Ocala’s Black community and history, from the importance of the city’s faith-based community to local achievements in music, commerce, medicine and education. “The mural tells the story of Ocala through the contributions of Black Ocalians, celebrating the Black leaders and pathfinders that made Ocala what it is today,” says Jennifer Normoyle, grants & outreach manager for Ocala Recreation and Parks.

Recognizing the power of the mural to inform current and future generations about the city’s history, the Marion Cultural Alliance, in partnership with the City of Ocala, College of Central Florida, and Marion County Public Schools (MCPS), used funds from the Levitt AMP Bridge grant to create an educational guide that takes a deeper look at the stories represented in the mural. Encompassing social studies, music and visual arts, the guide meets the State of Florida’s educational standards for K-12 students, and is designed to be an engaging teaching tool for all ages. Through the grant, 50 school media centers in Marion County were each given enough guides for a full class of students. “I think that being able to look at that wall and the history and the people who are featured on it, they were trailblazers especially during the civil rights movement and continuing that into today, and I find that the people who are on the wall could serve as an inspiration to our students,” MCPS Fine Arts Specialist Joanne Crowder said to WCJB News. Those outside of Ocala can experience the mural as well, with a free virtual tour and digital edition of the booklet available online. 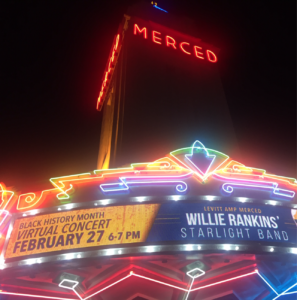 The same year Ocala’s Black History Mural was painted, the University of California system expanded to include a new campus in the small San Joaquin Valley city of Merced. Today, with a student body of just under 9,000, UC Merced enrolls a larger percentage of students from low-income households and underrepresented ethnic groups than any other UC school, and is one of the most sustainable campuses in the country. In 2020, UC Merced Arts planned to present the first ever Levitt AMP Merced Music Series, with the goal of bridging the city’s “town-gown” divide and fostering a sense of shared identity between the University and the rest of Merced. Though the series was postponed until 2021, UC Merced participated in the 2020 Levitt AMP Virtual Music Series, presenting hometown rock band Valley Wolf, and through the Levitt AMP Bridge Grant, will present another virtual show this Saturday: the Levitt AMP Merced Black History Month Concert, featuring Willie Rankins’ Starlight Band. 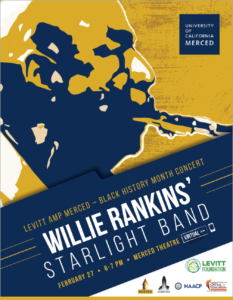 Following the historic momentum of the Black Lives Matter movement this summer, the team behind the Levitt AMP Merced Music Series sought to leverage the Levitt AMP Bridge Grant to promote Black voices through a new virtual concert.  “We wanted to celebrate Black History Month in a meaningful way, and bring a different perspective to the stage,” says Kim Garner, UC Merced Executive Director of Arts. To present the concert, UC Merced partnered with the Merced NAACP, which suggested booking a local musician who would be familiar to Merced’s Black residents. Saxophonist Willie Rankins, a native of nearby Emeryville, California, was a perfect fit. A prodigious player from an early age, Rankins spent a decade in Detroit, where he toured and recorded with an all-star cast of musicians including The Temptations, The Four Tops and The Supremes, while working for Motown records. Now based in the Bay Area, Willie Rankins’ Starlight Band is a new outfit featuring some of his oldest friends and collaborators. The free concert will be streamed live from the historic Merced Theatre, on Saturday, February 27th at 9pm ET / 6pm PT. Tune in by following the link on this webpage.

As Black History Month draws to a close, we remain steadfast in our commitment to celebrating Black voices and artistry beyond February. We’re incredibly proud of how our Levitt AMP nonprofit partners in Ocala and Merced have taken on this work in their own communities. Keep an eye on our blog for more stories on how Levitt AMP communities used Bridge Grants to keep people connected and inspired during these uncertain times.