Early industrialization leads to multicultural community
Situated along the winding Blackstone River, the Northern Rhode Island city of Woonsocket is home to just over 40,000 people. Once at the epicenter of America’s industrial revolution, a collection of small agriculture communities that later became Woonsocket harnessed the Blackstone River’s falls to power textile mills and machinery along its banks, bringing wealth and prosperity into the region in the mid 19th century. The birth of industry in Woonsocket led to an influx of French-Canadian immigrants seeking work in the mills, and a substantial number of current Woonsocket residents trace their ancestry back to these workers.

An 1886 etching of downtown Woonsocket

Diversity in Woonsocket increased during the Great Migration of the early-to-mid 1900s, when a large population of Black Americans from the South, particularly South Carolina, relocated to the community in search of opportunity in the textile mills. In the latter half of the 20th century, as America’s industrial might began to wane, Woonsocket’s economy shifted towards technology, finance, and retail. While some manufacturing jobs remained in the Blackstone River Valley, its early days of prosperity came to an end, and like many other communities New England, Woonsocket faced steady economic decline. As young people in the community looked for opportunities elsewhere, the textile industry began to recruit weavers from Columbia, Laos, and other countries in Latin America and Southeast Asia. Woonsocket soon became a multicultural melting pot, with cultures, traditions and cuisines from across the globe creating the fabric of the community, still present today.  “On any given day, you’ll hear so many different languages as you walk around Woonsocket,” says Meg Rego, NeighborWorks Blackstone River Valley’s Director of Resource Development and Communications. “Diversity permeates through the city.”

As a community development corporation, NWBRV takes a multi-faceted approach to bettering the lives of Woonsocket residents. “NeighborWorks does everything from community development to financial education and beyond,” says Rego, “anything that improves community life.” Housing is a major component of the organization’s work, and they are currently involved in transforming now-vacant mills in the city’s downtown into affordable housing for artists. Rego recalls coming across the Levitt AMP [Your City] Grant Awards in a statewide newsletter and instantly seeing a perfect fit for her community. “When we saw the Levitt grant,” says Rego, “we realized this could be a way to highlight all the cultures that exist in our city, to bring people of all backgrounds together, to create a space where people can enjoy one another and meet their neighbors.”

Located in the heart of downtown Woonsocket, the historic River Island Art Park was a natural choice of venue for a summer concert series. After a popular skating rink at the park closed in 2014, the picturesque green space fell into disuse, and resources to revitalize it were in short supply. 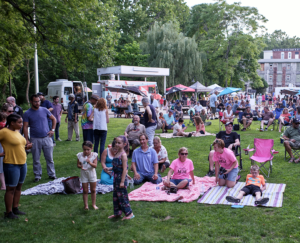 A packed lawn at River Island Art Park in 2019

Confirming the partnership with the City was key to bringing Levitt AMP to Woonsocket. As Rego describes, strong support from City agencies has spurred the series towards success—as has additional partnerships with local organizations. Bringing in strong ties to Downtown Woonsocket’s businesses and restaurants, nonprofit Downtown Woonsocket Collaborative also joined the effort as a second key partner. Woonsocket’s Faith community has supported the series as well, with partners including St. James Baptist Church and V!DA Church. Mission-driven G. Cole Productions has partnered with NWBRV to bring youth performers from the community to the Levitt AMP stage each summer.

“The place to be” on Friday nights
During the inaugural Levitt AMP Woonsocket Music Series, Rego describes a slow start that evolved into a local phenomenon. “It took a little while to get it up and running,” says Rego, “people were like, ‘what is this free thing happening downtown?’” As interest from the community grew, the Levitt AMP series soon became the de facto place to be on Friday Nights, with individuals, friends and families from throughout the community returning week after week. During the 2019 series, attendance continued to grow, with some shows bringing in over 600 concertgoers. “It’s a place where people found friends, found neighbors,” says Rego. “They knew that regardless of what else was going on, River Island Art Park was a place they could go on Fridays and feel welcome.”

The Levitt AMP series has also had a positive impact on the local economy. According to Rego, several new restaurants and businesses have opened in Downtown Woonsocket since the series launched in 2018, with proprietors citing the success of the series as a factor in their decision to purchase vacant buildings. Levitt AMP has played a role in demonstrating a renewed potential of Downtown Woonsocket, and Rego looks forward to continuing its impact next year.

Taking on the virtual space
The Levitt AMP Woonsocket Music Series will return to River Island Art Park next summer, but in the meantime, the series’ organizers have a full docket of virtual content on the horizon. Thanks to recordings from ON Radio AM/FM, a local station that broadcast each live Levitt AMP performance in previous years, the community will be able to revisit cherished summer memories with re-broadcasts of past concerts each Friday night for the next eight weeks. With most of the artists who were booked for this year’s concert series already locked in for 2021, the community will have a sneak peek of next summer with a special virtual “preview” show on August 28th. Three socially distant in-person concerts are also in the works. According to Rego, the dedicated team of Levitt AMP organizers, many of whom are volunteers, has shown tremendous perseverance in the face of COVID-19. Production manager Adam Brunetti and MC Marlon Carey aka Inphynit DaGhost have been instrumental in carrying the nascent tradition of community-wide Friday night entertainment into the digital space. “They went overboard this year to come up with creative solutions to ensure that the spirit of Levitt lived on during the pandemic.” says Rego of the team. 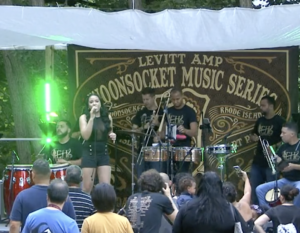 Woonsocket’s summer of virtual concerts kicks off in a big way tonight with a showcase of local talent headlined by rising salsa sensation EhShawnee as part of the Levitt AMP Virtual Music Series. With music designed to make “everyone under the sun” start dancing, the Rhode Island-based artist, who immigrated from the Dominican Republic at a young age, is already making waves in the international salsa scene. EhShawnee took home the prestigious Premio Conga de la Salsa award for Best New Artist last summer in Santa Domingo, and since then, her stateside star has continued to rise. Rego and EhShawnee first connected through their mutual involvement with Rhode Island nonprofits, and in 2018, she performed at one of the most memorable Friday night shows of the Levitt AMP Woonsocket Music Series. Tonight’s broadcast will feature archival footage from the show as well as newly recorded a capella material from the singer. Experience the music tonight at 8pm ET / 5pm PT at levittamp.org/virtual!