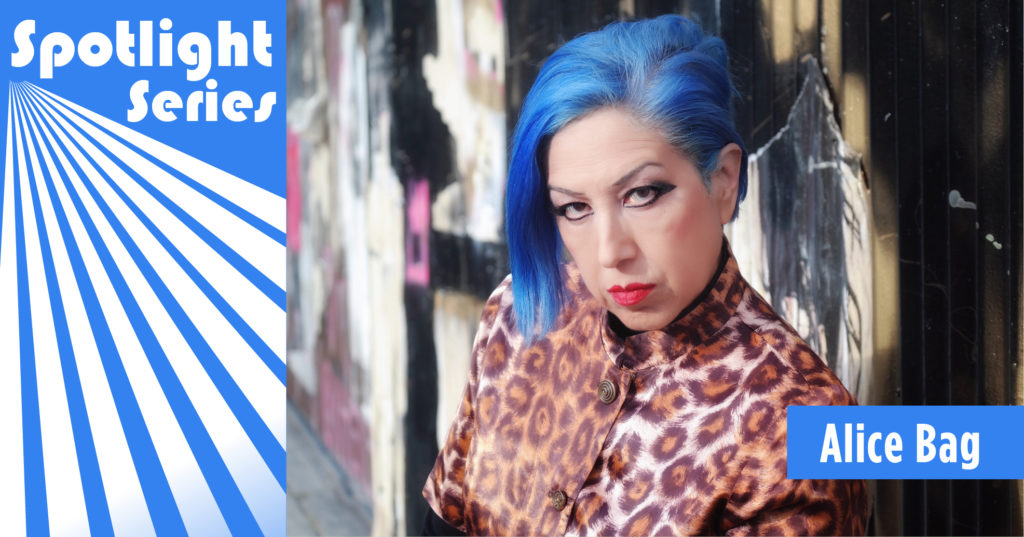 Tonight, the punk goddess herself, Alice Bag, is bringing her original Chicano punk rock to Levitt Pavilion Los Angeles in MacArthur Park. Best known for creating the sound that would later evolve into hardcore punk, Levitt concertgoers are in for a historic show. Bag’s music is built from more than just hardship and self-expression – it’s a volatile combination of motherhood, blown-out electric guitars and pure feminine power.

Beginning her career as part of The Bags – a band co-founded with Patricia Morrison – Bag set her sights on making waves within LA’s newborn punk scene. She quickly gained recognition for her female-led group and a particularly aggressive sound and style that would later be coined as “hardcore.” Penelope Spheeris’s 1981 documentary The Decline of Western Civilization featured The Bags as pioneers of the SoCal punk genre alongside bands such as Black Flag and The Germs. However, the release of the documentary coincided with the peak of their fame as a band, and The Bags split up the same year to pursue new projects.

Since then, Bag has worked with numerous other groundbreaking bands over the years such as The Boneheads, Cholita and, most recently, Stay At Home Bomb. In 2011, Bag published her first book: an autobiography titled Violence Girl: From East LA Rage to Hollywood Stage—A Chicana Punk Story, which chronicled her tenure in The Bags from a feminist point of view and her childhood experiences with domestic abuse in extensive detail. The memoir earned rave reviews for redefining “hardcore” as a method of empowerment, and during her book tour, she surprised many of her stops with impromptu performances. In 2015, Bag self-published a second book, Pipe Bomb for the Soul, which focused on her experiences living in Nicaragua for a short period in the ‘80s.

If you’re in Los Angeles tonight, be sure to swing by MacArthur Park in the downtown area for a FREE concert that you’ll never forget!