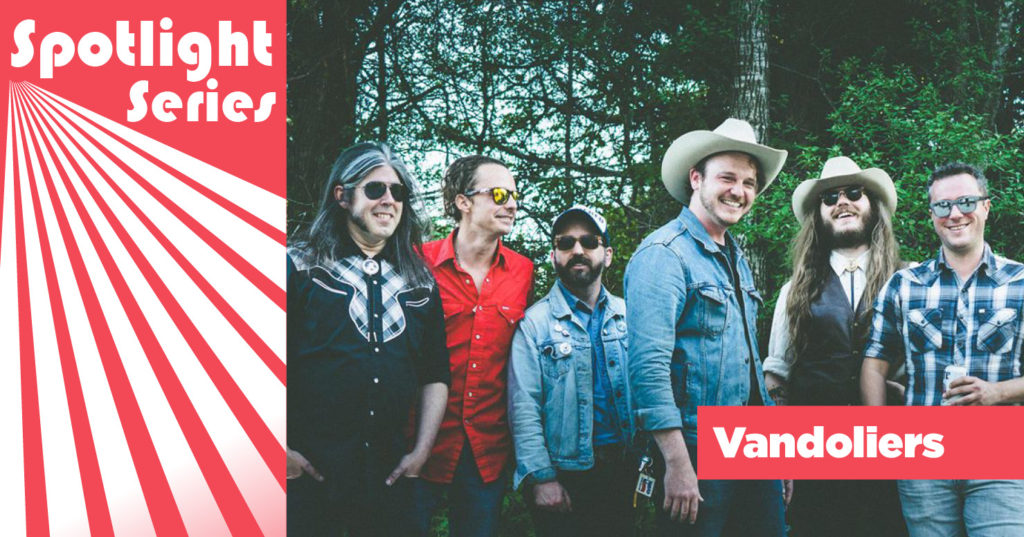 The days are getting longer and the nights are getting warmer—which means, it’s time for the 2018 Levitt concert season and the return of our annual Spotlight Series! Each week on our blog, we’ll be shining the spotlight on an artist performing on a Levitt stage that week. Throughout the series, you’ll get to know some of the talented performers bringing music of all genres to Levitt audiences across the country.

To get us all in the mood for summer fun, we’re launching the 2018 Spotlight series with twangin’ Texas cowpunk rockers, the Vandoliers, who’ll take the Levitt AMP Galva stage Sunday night!

Named one of Rolling Stone’s “10 New Country Artists You Need to Know” last May, the Vandoliers have taken the iconic Texas music scene by storm with their high-octane jams that fuse punk’s break-neck tempos and growling vocals with country’s raw emotion and image-rich storytelling. Since their electrifying performance at the 2016 Levitt AMP Jacksonville Music Series, the group has released their 2017 album The Native to great acclaim and made the courageous decision to quit their day jobs to keep up with the growing demand for their rowdy Texas tunes. Freckle-faced and denim-clad frontman Joshua Fleming formed the group in 2015 following the dissolution of his previous punk band and Dallas-Fort Worth staple, The Phuss, and an unfortunate eye infection that left him nearly blind for eight weeks. While bedridden, Flemming discovered country music’s answer to the popular 1950s-80s music performance show American Band Stand, The Marty Stewart Show. Each episode featured Stewart (formerly Johnny Clash’s guitar player), his band “The Fabulous Superlatives,” his wife Ms. Connie Smith and a revolving collection of some of country music’s greatest legends. Watching artists he later described as “the best musicians [he’d] seen in [his] entire life,” Fleming discovered a vibrant new side of country music. So inspired, Fleming wrote about 30 songs that weekend—many of which can be heard on the band’s first album Ameri-kinda (2016) and The Native. The first song he wrote that weekend, “Don’t Tell Me What to Do” gives listeners insight into Fleming’s internal dialogue as he embraced his inner Texan and embarked upon writing his first country song. “It doesn’t matter what genre you write in,” He recalls telling himself, “Just write a good song.”

And now for your listening pleasure, a “good song,” to celebrate the Vandoliers’ upcoming Levitt AMP Galva show, the endless possibilities of the upcoming season and a full season of free Levitt concerts nationwide!