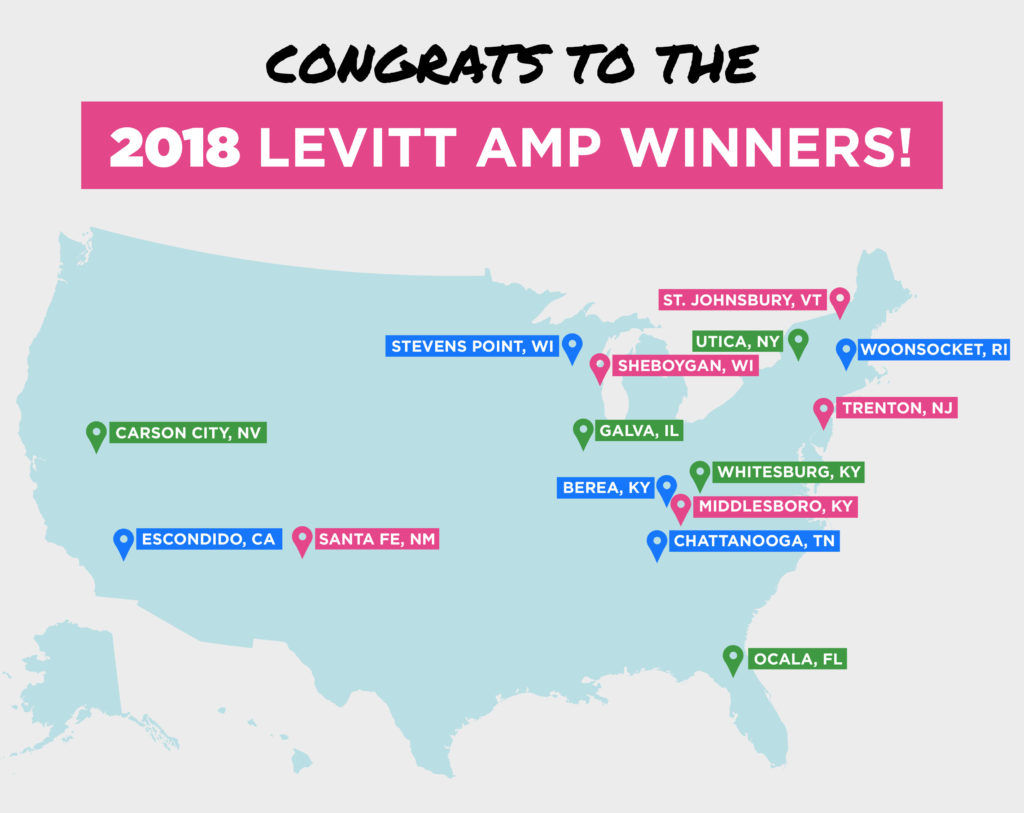 In June, the Levitt Foundation invited nonprofits to submit proposals that would reflect the three goals of the Levitt AMP awards: Amplify community pride and the city’s unique character; enrich lives through the power of free, live Music; and illustrate the importance of vibrant public Places. Nonprofits that received a Levitt AMP grant in previous years were eligible to reapply.

The public voted on the submitted proposals over a three-week period in November, selecting their favorite projects online at levittamp.org. “We are thrilled to announce the 2018 Levitt AMP Grant Awards winners, and are thankful to everyone who voted during the online competition to choose the finalists,” says Sharon Yazowski, Executive Director of the Levitt Foundation. “Each of the winners makes a compelling case for how the Levitt AMP Music Series will create vibrancy in a public space while strengthening the social and economic fibers of their communities.”

The Berea Arts Council will continue to infuse vibrancy into the city’s Old Town Artisan Village—a historic cultural district recovering from years of economic hardship and vacancy—through multi-layered and inclusive arts experiences at the second Levitt AMP Berea Music Series. The 2018 series will help to spark further investment in the area, positioning Old Town to be a hub for art, food, and community gatherings.

The Levitt AMP Carson City Music Series presented by the Brewery Arts Center will return for the third year, energizing the Minnesota Street Stage through free live music and further transforming an abandoned corridor into a thriving community hub and point of pride. The upcoming series will deepen and expand activation of downtown Carson City’s Historic District, helping the Brewery Arts Center realize its potential as an epicenter for the arts.

Jazzanooga will bring the second Levitt AMP Chattanooga Music Series to life on the lawn of the historic Martin Luther King District’s Bessie Smith Cultural Center, further activating the area once considered a famed live music hub and center for African American community life. The 2018 series will bring momentum to a larger community-wide effort to celebrate the area’s renowned musical heritage while reestablishing it as a thriving cultural destination.

The California Center for the Arts, Escondido will present California’s first Levitt AMP Music Series at Grape Day Park, an underused historic green space in need of activation. Levitt AMP Escondido will bring new life to this central and accessible park, highlighting its potential while drawing together the city’s diverse communities to enjoy family-friendly entertainment alongside one another.

The Galva Arts Council will enliven Wiley Park through the Levitt AMP Galva Music Series, transforming this large underused green space into a vibrant community hub for people to come together and enjoy a broad range of music genres. The series aims to have positive impact on the lives of those who live and work in Galva and its surrounding areas, creating a favorite gathering place and point of local pride.

Through the Levitt AMP Middlesboro Music Series, fourth-year grantee Discover Downtown Middlesboro has transformed a gravel lot into the Levitt AMP Pop Up Park—a vibrant gathering space complete with a volunteer-installed lawn and donated permanent stage. The 2018 series will build upon this momentum, augmenting the community-driven revitalization of its downtown and positioning the series for a wider impact.

Marion Cultural Alliance will present the second Levitt AMP Ocala Music Series in Webb Field, a three-acre green space in the once-thriving West Ocala neighborhood. The 2018 series will further demonstrate the value of this underused space, bringing the entire community together to feel the power of shared cultural experiences and see the vast potential for community engagement in this central green space.

The nonprofit AMP Concerts will present the second Levitt AMP Santa Fe Music Series at The Santa Fe Railyard in the heart of the city in conjunction with the iconic outdoor space’s 10th anniversary. The 2018 series will continue to elevate the mix of talent presented, expanding its reach and providing a vibrant point of pride for Santa Fe residents of all ages and backgrounds.

Levitt AMP Sheboygan has flourished over the past three years, sparking significant investment in the area and bringing people together downtown. The John Michael Kohler Arts Center will present the fourth Levitt AMP Sheboygan Music Series in the city’s new City Green—once the site of a vacant large retail store, soon-to-be a vibrant green space in the heart of the city’s newly created Arts, Culture and Food District—celebrating this multi-year placemaking milestone.

Catamount Arts will present the second Levitt AMP St. Johnsbury Music Series on Dog Mountain, a bucolic, dog-friendly spot in the center of a former industrial area that is ripe for revitalization. The 2018 series will continue to provide cultural access, drive economic activity, bring the community together and elevate local pride.

CREATE Portage County will present the second Levitt AMP Stevens Point Music Series in Pfiffner Park along the Wisconsin River, building upon their efforts to create a thriving city center that provides urban amenities and a lively cultural scene for the community. The 2018 series will continue to illustrate the social and economic impact of creative placemaking initiatives to the local community and beyond.

Now in its fourth year, the Levitt AMP Trenton Music Series presented by the Trenton Downtown Association will build upon its progress, spurring additional economic activity and community participation in the central and accessible Mill Hill Park. The upcoming series will further transform this underused space, giving people of all backgrounds a place to connect and enliven their community through free, live music.

Utica Monday Nite will present the third Levitt AMP Utica Music Series in Kopernik Park to fuel the social, physical and financial resurgence of Oneida Square, bringing the refugee-dense neighborhood closer to realizing its potential as a hub for culture and community engagement. The 2018 series will continue to illustrate the value of this underused green space as it inspires people of all backgrounds to come together to create a stronger, more unified community.

The Cowan Community Center will bring the Levitt AMP Whitesburg Music Series to life on the Mountain Heritage Festival Stage, enlivening the center of this small rural community—which ten years ago was home to a closed school and vacant storefronts. The series aims to bring momentum to the town’s revitalization, encouraging residents to celebrate and participate in the renewal efforts together, recognizing the value of inclusive cultural experiences in the process.

NeighborWorks Blackstone River Valley will present the Levitt AMP Woonsocket Music Series in River Island Art Park, a scenic underused park situated at the heart of the city. The series aims to serve as a cultural, community, and economic catalyst for the city—drawing neighbors back into the once bustling public square to enjoy free and accessible art, support economic growth and strengthen community ties.

Congratulations to these 15 communities and stay tuned for updates on Levitt AMP concert dates and performers on levittamp.org!