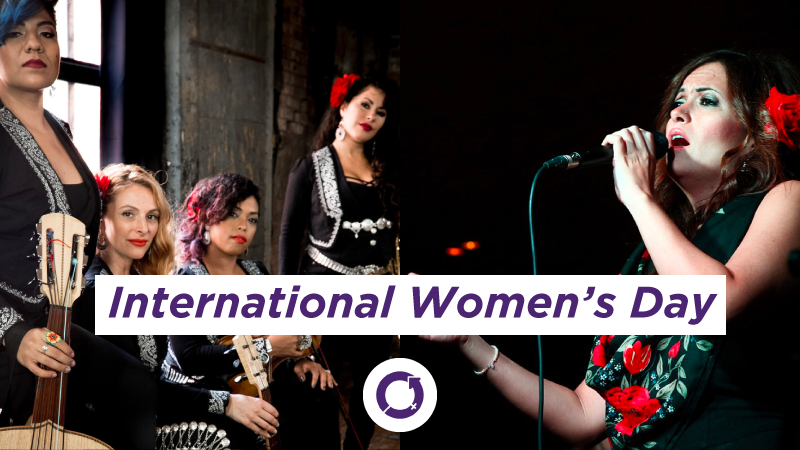 Sunday is International Women’s Day, a global celebration of the social, economic, cultural and political accomplishments of women. On this day—and all throughout Women’s History Month (happening now!)—we celebrate the achievements of women around the globe and spread awareness of gender bias and inequality. In this vein, today we’re shining the spotlight on a few fearless females who have used their musical gifts to break barriers and help forge a more just and equitable world.

Flor De Toloache
The GRAMMY winning all-female mariachi sensation and 2019 Levitt National Tour artist, Flor De Toloache, continues to win the hearts of both contemporary and traditional mariachi music fans alike through their distinct artistic vision and sophisticated, fresh interpretation of mariachi classics. In 2017, the group received the GRAMMY Award for Best ‘Ranchero/Mariachi Album’ for Las Caras Lindas, making them the first females to win in the category. Beyond pushing musical boundaries with their dynamic fusion of mariachi, jazz, salsa and pop, they’re also transcending gender and cultural barriers with their commitment to a traditionally male-dominated genre. Dedicated to the fight for justice for all, ‘Las Flores’ recently partnered with Southern Poverty Law Center to create “El Corrido de David y Goliat” and help protect and advance immigrant rights through song.

Farah Siraj
Named Jordan’s Musical Ambassadress, international Arabic flamenco jazz sensation, Farah Siraj uses her music as a medium for peace and celebration of the global community’s rich diversity. She is an enthusiastic advocate for human rights—particularly as they relate to refugees and women. In 2005, her composition “To the Sudanese Women” won Berklee College of Music’s competition to represent the struggle against the genocide in Darfur. In addition to being featured on the 2006 compilation album We Are All Connected, Siraj’s moving piece was played for the United Nations Security Council as it passed legislation addressing the genocide in Darfur.

Please join us in celebrating these courageous musicians, and all those who have stood up against inequities with strength, grace and courage. In doing so, they are creating a more just world for us all to enjoy.