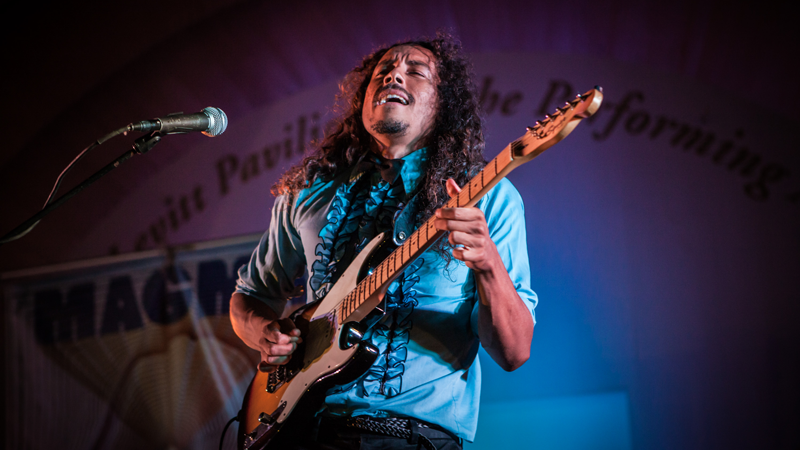 Over the past eight years, Chicano Batman has gained a loyal following of Los Angeles fans through performing across their home region of Southern California—including at Levitt Pavilion Pasadena (2013). With the their latest album Freedom Is Free released just last Friday, however, music critics anticipate that the band and their SoCal-born-and-bred sound are ready to break out on a national scale.

Chicano Batman was formed in L.A. by then college students Eduardo Arenas and Bardo Martinez, who shared a love of classic soul, or “low-rider oldies” as it’s called by generations of Mexican Americans in East Los Angeles who grew up under the genre’s influence via radio. Joined by Gabriel Villa on drums and fellow Southern Californian Carlos Arévalo on guitar, Chicano Batman captures the essence of these classics in their core sound while also crossing over into psychedelic rock, tropicália, Afrobeat and more. Their vintage grooves even have a memorable signature look to match—identical suits and ruffled tuxedo shirts, which the band sports at every show they play.

Producer Leon Michels, who himself plays for soul revivalist group (and 2016 Levitt Shell Memphis performer) the Dap-Kings, was responsible for honing Chicano Batman’s eclecticism into Freedom Is Free. The album is as culturally rich as their home base of L.A., with the band’s Latino background playing a strong role in their artistry. English and Spanish lyrics can be heard throughout the new album, featuring backing vocals from the all-female Levitt AMP Sheboygan 2016 act Mariachi Flor de Toloache. The band even filmed a Johnnie Walker commercial featuring their bilingual take on Woodie Guthrie’s “This Land Is Your Land” in the historically Mexican American neighborhood of Boyle Heights.

The 2017 release of the viral video shortly followed some of Chicano Batman’s highest-profile performances to date, like supporting Jack White and Alabama Shakes on tour, as well as playing the Coachella Music Festival in 2015. With their return to Coachella next month and a national tour underway (including a South by Southwest Festival show on March 16), Chicano Batman is ready to play for their biggest audiences yet after years of polishing their sound as a local, emerging act. Cultural and musical diversity are central to the band’s music as well as our efforts to bring people of all walks of life together, so we’re thrilled that this past Levitt performer is taking off across America! Take a listen to their new album Freedom Is Free below and tell us if you have a favorite Chicano Batman song.