Using virtual reality headsets, “concertgoers” will experience the opening minutes of Beethoven’s famous symphony as if seated in the Walt Disney Concert Hall—without ever leaving the VAN Beethoven truck. 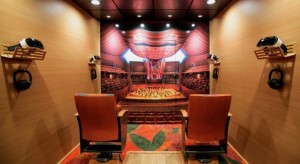 Inside the VAN Beethoven truck. Photo courtesy of the LA Phil.

As visitors move around, their viewing angle shifts with them, and the audio—recorded using 40 microphones—subtly changes as if viewers were at a live performance. The hall is empty, treating the viewer to an intimate private concert close to conductor Gustavo Dudamel and the rest of the orchestra. The four-minute experience, produced by interactive agency Secret Location with support by a grant from The James Irvine Foundation, also incorporates colorful bursts of computer-generated graphics visually representing the dynamics of the famous composition.

What makes this project remarkable? 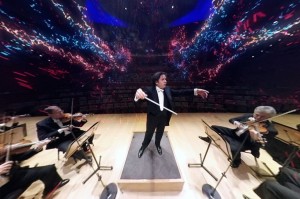 Reflecting conductor Gustavo Dudamel’s passion for bringing the arts to underserved communities, VAN Beethoven makes it possible for people who may not otherwise have access to the LA Phil to experience one of their concerts for free. In addition to Levitt Pasadena and Levitt Los Angeles, the mobile tour will also stop at Grand Park, LA Korean Festival, Downtown Artwalk, CicLAvia and other parks, cultural festivals, museums and outdoor spaces in the greater Los Angeles area through October 18.

“Music is a beautiful symbol of unity, and it is very important to share the joy of music with people from all walks of life and from the many different communities in Los Angeles and beyond,” said Dudamel in a press release. “I have often said music is a fundamental human right, and using this technology helps us to make this mission even stronger.”

Be sure to check out the VAN Beethoven mobile tour when it stops at Levitt Pasadena tonight from 6–9 p.m. and at Levitt Los Angeles tomorrow from 4–8 p.m.!

And if you don’t live in southern California, the experience will also be available as a free app called Orchestra VR in the Oculus Rift and Samsung VR app stores.

Please note that this technology has been approved for use by people 13 or older without a history of epilepsy, seizures or convulsions. The truck is wheelchair accessible. Any user under the age of 18 (minor) will require a parent to complete a waiver in order to take part in the experience.