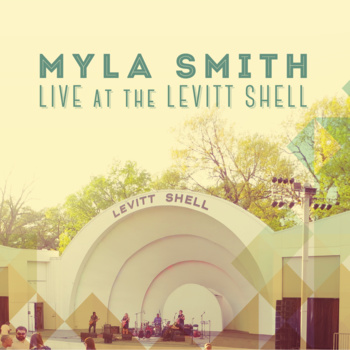 The Shell in Overton Park, Memphis, reborn as Levitt Shell in 2008, has seen a lot over the years, including historic performances by Elvis Presley, Johnny Cash and most recently Aaron Neville. Now it’s the setting for a new live double album, Live at the Levitt Shell, by emerging folk/pop singer-songwriter Myla Smith.

While exploring options to follow up her 2013 release Hiding Places, Smith was offered a performance at an Easter Eve concert at Levitt Shell and couldn’t resist the idea of recording a live album at the iconic space.

“The Shell is such a historic venue in Memphis, a place that so many iconic artists have performed… so of course I jumped at the chance to perform there!” said Smith in a recent interview with Levitt Pavilions. “To be able to capture that moment in time, with a killer band, at such a historic venue, on such a special night—it seemed like a once-in-a-lifetime opportunity I couldn’t pass up.”

Despite her nervousness about recording an album in front of a live audience, Smith overcame her fears to play to a packed house.

“Walking out onto that stage on Easter Eve was surreal,” said Smith. “There must have been over 1,000 people sitting out on the lawn. The weather was perfect. The band was on. It’s definitely a night I’ll remember for a long time.”