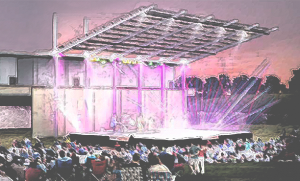 A sketch of the new Levitt Pavilion Houston at Willow Waterhole Conservation Reserve.

Levitt’s vision for an America filled with thriving public spaces is one step closer to reality with recently announced plans to bring the Levitt program to Houston!

Houstonians will soon have a unique place in their city to experience free music under the stars. Levitt Pavilion Houston will be the first Levitt venue on a site dedicated to natural resource conservation. The new music venue will be part of the city’s 280-acre Willow Waterhole Conservation Reserve, a public park that provides needed flood relief, offers recreational amenities and, with the establishment of the Levitt program, will provide free access to the performing arts for all.

“I can’t tell you how excited I am that the national Levitt organization has chosen the city of Houston for their eighth pavilion,” says Houston Mayor Annise Parker. “They’re working with the Willow Waterhole Conservation Reserve to create something that will be a magnet for both folks in the neighborhood but will also draw people from across the region. The fact that this gift comes with the commitment to 50 free performances every year is a special gift to Houston that really is unprecedented.”

Houston, the fourth largest city in the country with a diverse metropolitan population of over six million, has a history of flooding every year from hurricanes and tropical storms heading inland from the Gulf of Mexico. Following a series of catastrophic floods in the 1980s-90s, Project Brays, a $450 million joint effort of the Harris County Flood Control District and the U.S. Army Corps of Engineers, was established in 2000 for flood control improvements. Willow Waterhole, located in a section of Houston’s Westbury neighborhood, contained contaminated brownfields and abandoned buildings from years of flood damage. Willow Waterhole became a significant component of Project Brays when the site was allocated $75 million to create major infrastructure to reduce flood damage each year.

Recognizing Willow Waterhole’s potential to be more than just a flood control zone, local citizens banded together in 2001 to create the nonprofit Willow Waterhole Greenspace Conservancy. They envisioned Willow Waterhole as a major new park that could revitalize the area as well as create needed green space and provide recreational amenities. Since opening in 2006, Willow Waterhole has played a critical role in reducing flood damage through a series of interconnected lakes that function as storm water detention basins. Surrounding these lakes are expansive, open green spaces where people can enjoy nature in the heart of their city.

Plans for the venue put the stage at water’s edge.

The stunning plans for Levitt Pavilion Houston at Willow Waterhole include a 3-acre lawn area that will accommodate up to 5,000 people for concerts, with a stage perched at water’s edge. The project is being driven by the newly formed Friends of Levitt Pavilion Houston, in partnership with the City of Houston and Harris County. “Over the years, Willow Waterhole has held outdoor events, but we always dreamed of more,” explains Howard Sacks, Chair of Friends of Levitt Pavilion Houston. “We jumped at the opportunity to partner with Levitt and build a permanent, state-of-the-art outdoor pavilion in an area of town that had been underused and neglected.”

While Willow Waterhole has become popular for bird watching (over 150 species have been spotted), picnicking and hiking on its numerous walking trails, Conservancy leaders sought to fully realize the park’s potential as a citywide destination. With activities like an annual jazz festival and outdoor movie screenings that have attracted families from the neighborhood and beyond, the stage was set for major programming moving forward. In 2012, Conservancy leaders contacted Levitt Pavilions in the hopes of bringing the Levitt program to Houston.

“The more we learned about Willow Waterhole, the more it became clear it would be a perfect location for a Levitt venue,” says Sharon Yazowski, Executive Director of Levitt Pavilions. “Given the vision for this extraordinary site, combined with the area’s diverse population and lack of cultural offerings, we recognized the potential impact of Levitt Pavilion Houston was profound. The venue will be a magnet for Houstonians of all backgrounds and will serve as a catalyst for further revitalization in the area. We are honored to partner with the impressive local leadership to create a thriving destination through the power of free, live music.”

“Without the close cooperation of the Brays Oaks Management District, the Westbury neighborhood and the Willow Waterhole Conservancy, we wouldn’t have been able to achieve this great gift for our city,” says Mayor Parker. “This took all of us, working together and putting our best foot forward.”

When Levitt Pavilion Houston opens, it will be a shining example of a community working toward a sustainable future and promises to become a vibrant, beloved place for all Houstonians to enjoy.

Houston’s Westbury neighborhood came together to breathe new life into the community following catastrophic flooding. Watch the fascinating evolution of the neighborhood, the creation of Willow Waterhole Conservation Reserve and the beginnings of Levitt Pavilion Houston in this video.