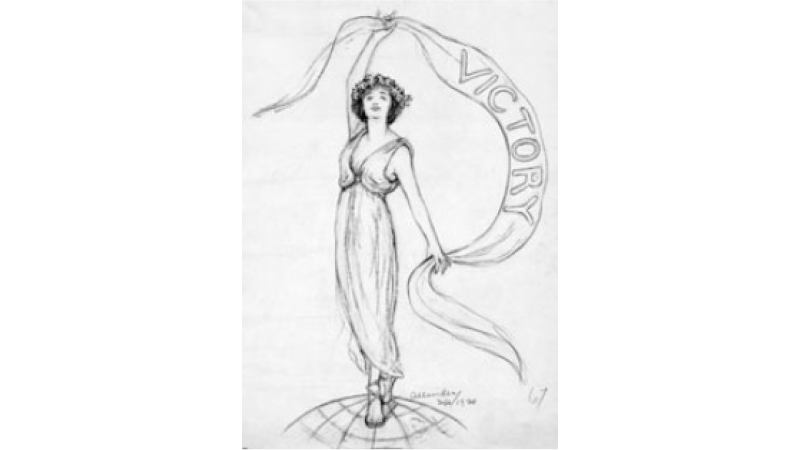 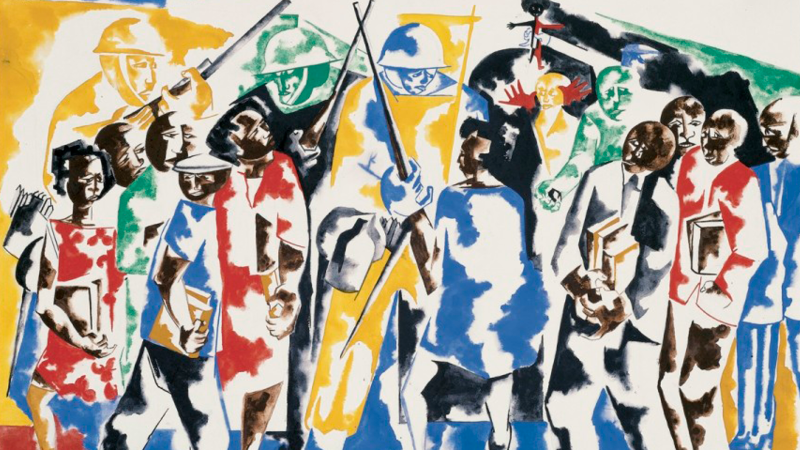 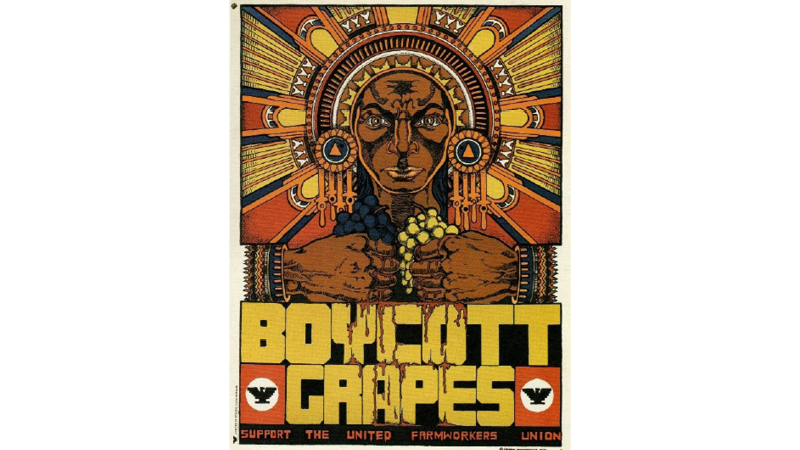 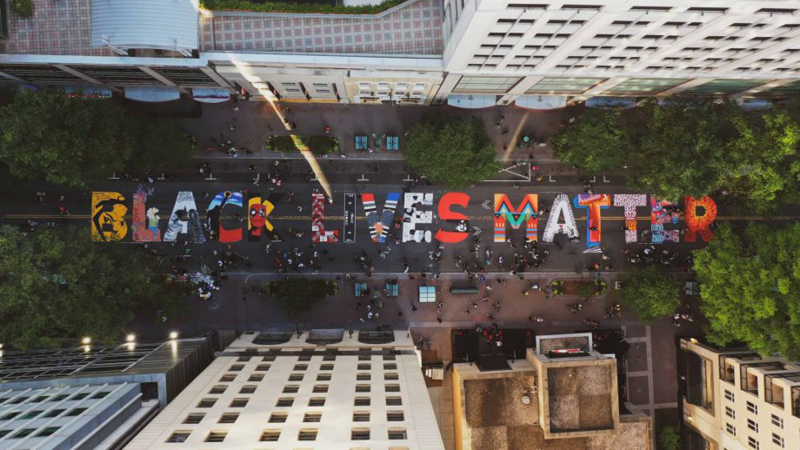 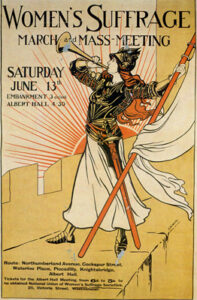 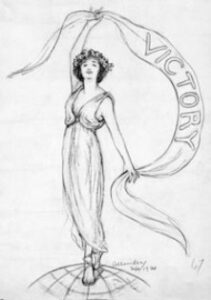 Empowering art of freedom during the Civil Rights movement
The Civil Rights movement of the 1950s and 1960s, which aimed to end our nation’s institutionalized discrimination, segregation and violence toward Black people, called for equal rights and protections under the law. This era’s surge of activism was marked by non-violent protests and acts of targeted civil disobedience, such as the Montgomery Bus Boycott, the Freedom Rides and the Greensboro Woolworth Sit-Ins. The movement also ushered in a massive wave of artistic expression to communicate the issues and ideals of the movement. Artists like Jacob Lawrence, Mahalia Jackson and David Hammons created powerful paintings, music and sculptures that amplified the movement’s fight for equality. For example, Lawrence’s celebrated 1962 painting “Soldiers and Students” depicts a group of Black students accompanied by three armed guards, surrounded by a group of angry protesters attempting to block their entry into a school. The painting poignantly captures the determination and courage of Black students trying to exercise their right to a fair and equal education.

In addition, spirituals, gospel and folk music played an especially important role in mobilizing and giving voice to the civil rights movement. “The freedom songs are playing a strong and vital role in our struggle,” said Martin Luther King in 1961. There’s perhaps no better example than the 1960 gospel anthem “We Shall Overcome,” a song out of the Highlander Folk School where activists trained in philosophy of nonviolence. Rooted in the past yet relevant to the times, the song embodied the strength and determination of civil rights protestors. With lyrics such as “We’ll walk hand in hand,” “We are not afraid,” and “I do believe we shall overcome some day,” this song of freedom offered courage, comfort and hope as protestors confronted prejudice and hate in the battle for equal rights. “We Shall Overcome,” along with songs like “Tree of Life” and “Keep Your Eyes on the Prize” became the heart, soul and soundtrack of the movement, sung by protestors across the country. 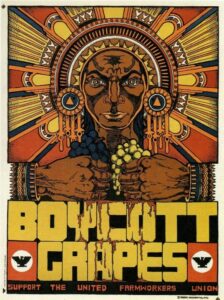 Much like the women’s suffrage movement, the United Farm Workers movement which launched in the 1960s leveraged visual art to give form to the challenges that inspired farm workers to demand improved wages and working conditions. During their fight for labor rights, the United Farm Workers (UFW), a California-based labor union serving predominately Spanish-speaking members, launched an impactful “Viva La Huelga” (or “Long Live the Strike”) poster campaign that featured memorable works like Xavier Viramontes’ “Boycott Grapes, Support the United Farm Workers Union” (1973). As a California-based painter, printmaker and pioneer of the Chicano Art Movement, Viramontes has dedicated his prolific career to creating socially-charged art that speaks out against injustice. His commitment to highlighting local issues led him to create a poster for the grape boycott that depicts a dark brown, god-like Aztec figure squeezing grapes with blood running down his hands, symbolizing the blood and sweat of farm workers. California-based Andrew Zermeño, another distinguished UFW movement artist, played a critical role during the Delano Grape Strike. After working closely with leaders of the United Farm Workers movement, Zermeño became an active graphic designer of strike posters that supported the UFW’s cause. 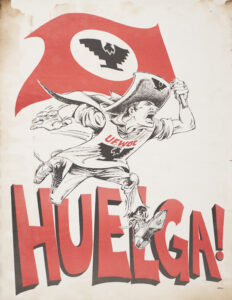 Zermeño’s 1965 “HUELGA!” or (“STRIKE!”) poster, which depicts a member of the United Farm Workers Organizing Committee carrying the UFW flag and shouting “huelga,” was successful in urging viewers toward action. The graphics in this poster campaign, which were plastered on walls and distributed as placards, empowered and solidified workers’ commitment to the movement and delivered the movement’s ideas to broad audiences. These posters called for action within and beyond the 80,000 UFW’s members. A 1975 Harris poll estimated that the national poster campaign inspired 17 million Americans to boycott grapes out of support for the farm workers. Lasting from 1965-1970, the Delano Grape Strike became one of the largest strikes in American history and resulted in a collective bargaining agreement with major grape growers that paved the way for increased wages, better working conditions and paid vacation days for workers. Beyond promoting the strike and boycott, the UFW movement posters covered a range of topics, including racism, child labor and immigrant rights-issues that communities of color still face today.

Envisioning equity through the art of the Black Lives Matter movement
Artistic expression continues to be at the forefront in today’s fight against systemic racism and violence as part of the Black Lives Matter movement. Formed in 2013 by Black organizers Alicia Garza, Patrisse Cullors and Opal Tometi, the movement came to life in response to the acquittal of George Zimmerman, the neighborhood watch volunteer who killed Trayvon Martin. Now a member-led global network that has mobilized millions of people in the U.S, the Black Lives Matter movement serves as “an affirmation of Black folk’s humanity, their contributions to society, and their resilience in the face of deadly oppression.” With renewed intensity this past summer as people flooded the streets in solidarity with Black lives as a result of the murders of George Floyd, Ahmaud Arbery and Breonna Taylor, art continues to drive the conversation forward around the social constructs that perpetuate inequality. We see it in protest posters, homemade yard-signs and City-generated crosswalk art declaring “Black Lives Matter,” and community-led murals commemorating those who have been killed. 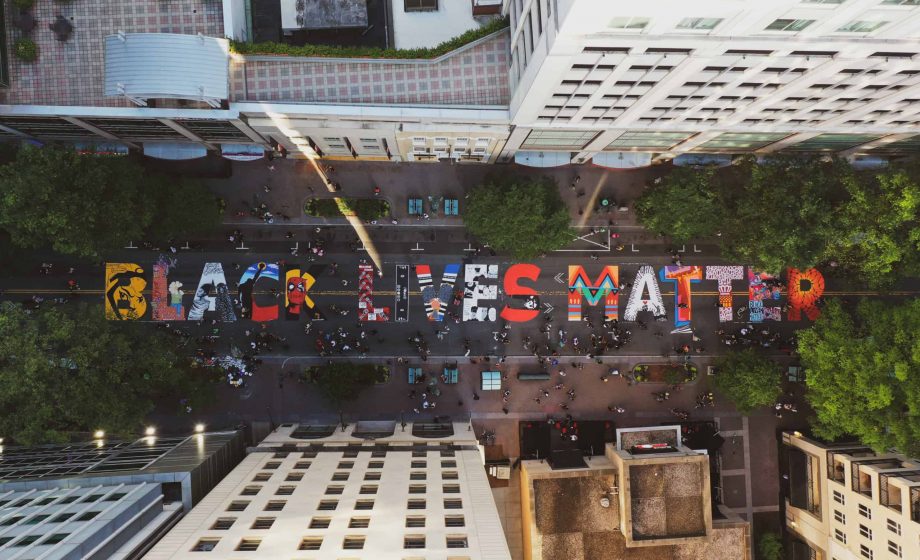 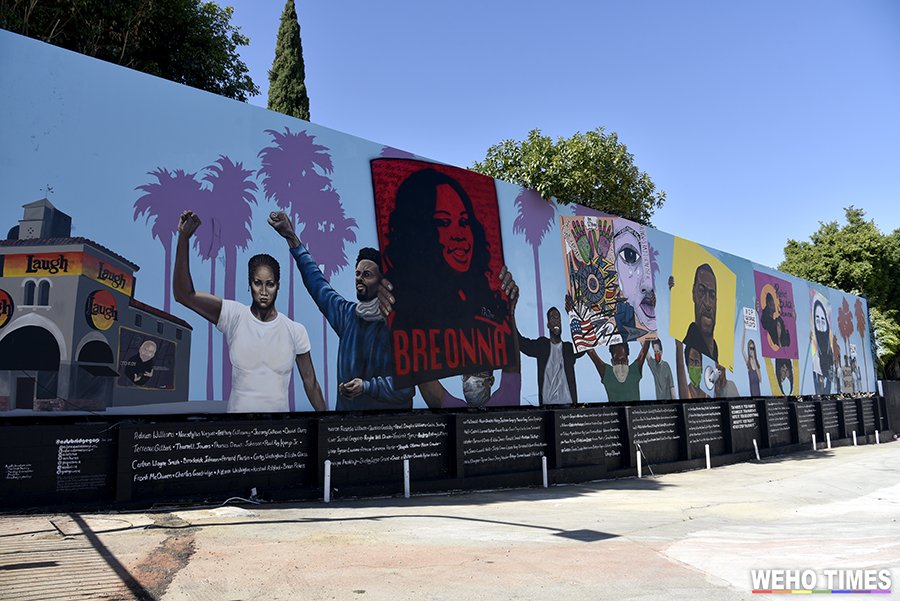 The call for justice goes beyond visual art to music and poetry, for example songs like Tobe Nwigwe’s “I Need You To,” which calls for justice for Breonna Taylor, or in Brandon Leake’s recent “America’s Got Talent” performance, a heart-wrenching spoken-word piece dedicated to his mother. Beyond communicating messages of social justice, the art and music used throughout the Black Lives Matter movement calls for political action. The imagery featured in murals, posters, installations, music and spoken-word poetry aims to communicate the need for real systemic change to institutions that oppress and marginalize Black people, imperative change that goes beyond a symbolic recognition of how Black lives matter.

Art as a driver for social transformation
From the women’s suffrage movement’s political cartoons to community-made Black Lives Matter murals calling for systematic change to racial injustices, art in its many forms has driven social transformation throughout history. The arts have the power to inspire people to embrace and participate in civic action, changing the world we live in. Art helps us reflect, learn and visualize the potential for our community, nation and world, which is often the first step toward building a society that is more aware, inclusive and just. Whether through posters, paintings, music or spoken word, art can serve as a tool for activism and social empowerment. As Nelson Mandela once said, “It is in your hands to make of our world a better one for all.”