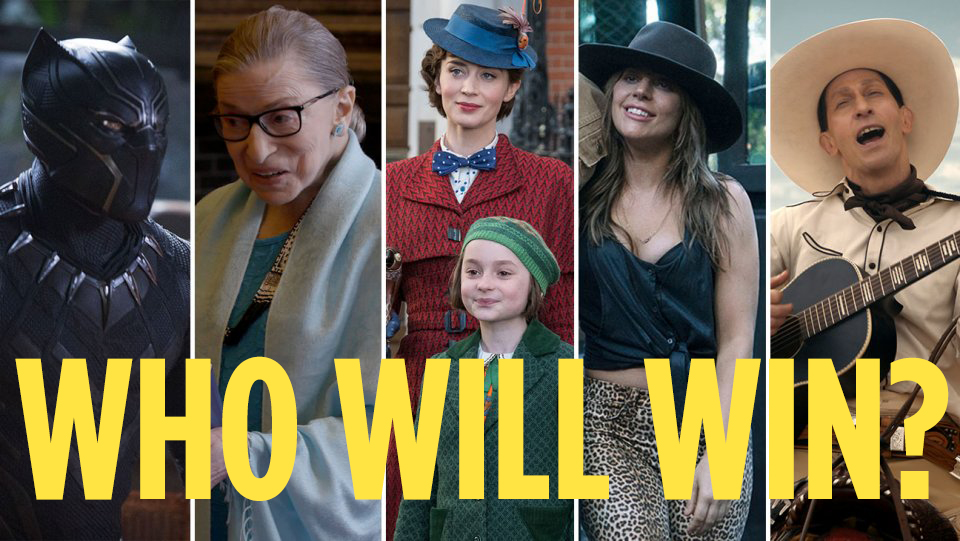 With the full list of 2019 Oscar nominees recently announced, we’re providing you a little background on this year’s best films and the original soundtracks that bring them to life. In this week’s post, we’re exploring the contenders for Best Original Song, which range from Afro-futuristic pop hits to old-timey Western tunes. Read on to learn more about the performers, musicians and writers who earned nominations this year!

“All The Stars” – Black Panther

As part of his bid to become the first performing artist to win a GRAMMY, Pulitzer and Oscar, Kendrick Lamar took on an enormous role in creating and curating the soundtrack for Marvel’s Black Panther (which is also the first superhero film to receive a Best Picture nomination!). Lamar states that it was a “privilege” to be able to work so closely with Director Ryan Coogler, who shared his vision for drawing complete inspiration from their African heritage. “All The Stars” is the radio-made, SZA-assisted closing song to the film that speaks to his ancestry and explains that you don’t have to be a fictional king to be a hero.

Acclaimed songwriter Diane Warren brings home yet another Best Original Song nomination for “I’ll Fight,” which was included in this year’s documentary on Ruth Bader Ginsburg and performed by Jennifer Hudson. Warren has received countless nominations between both the GRAMMYs and Oscars for her work with singers such as Lady Gaga, Cher and perhaps most notably, Celine Dion and her song 1997 “Because You Loved Me.” “I’ll Fight” is Warren’s empowering anthem made for one of the few female Supreme Court Justices in our country’s history.

Famous composer/lyricist duo Marc Shaiman and Scott Wittman team up once again for the Mary Poppins Returns soundtrack. Most well known for their work writing on Hairspray (both the Broadway show and film), Shaiman and Wittman have helped score countless movies, including Sleepless in Seattle and When Harry Met Sally, in addition to several stints on late night television, such as work with Saturday Night Live and The Tonight Show. Their latest collaboration, “The Place Where Lost Things Go,” is yet another example of their ability to fuse music, wit and charm.

From the GRAMMYS to the Oscars, you can find Lady Gaga’s fingerprints all over the music industry ever since her rise to pop stardom in the last decade. More recently she’s adventured into film and television with appearances in the latest Sin City film and a recurring role in American Horror Story. Her role in A Star Is Born aptly fits her own self-made story, and with some help from producer Mark Ronson and his team of in-house lyricists, “Shallow” stands as the film’s trademark romantic duet.

Another acclaimed writing duo, David Rawlings and Gillian Welch operate mainly in the country and folk scenes. Welch previously worked with the Coen Brothers (who directed The Ballad of Buster Scruggs) on their award-winning film O Brother, Where Art Thou?, whose soundtrack was just as reputable—it won the GRAMMY Award for Album of the Year in 2002, thanks in part largely to Welch’s contributions. The duo teamed with country singers Willie Watson and Tim Blake Nelson for this new Coen film that explores the curiosities of the Old West.

The 2019 Oscars begin at 5:00pm PST on Sunday, February 24, and will feature performances of Kendrick Lamar’s “All The Stars” and Lady Gaga’s “Shallow”