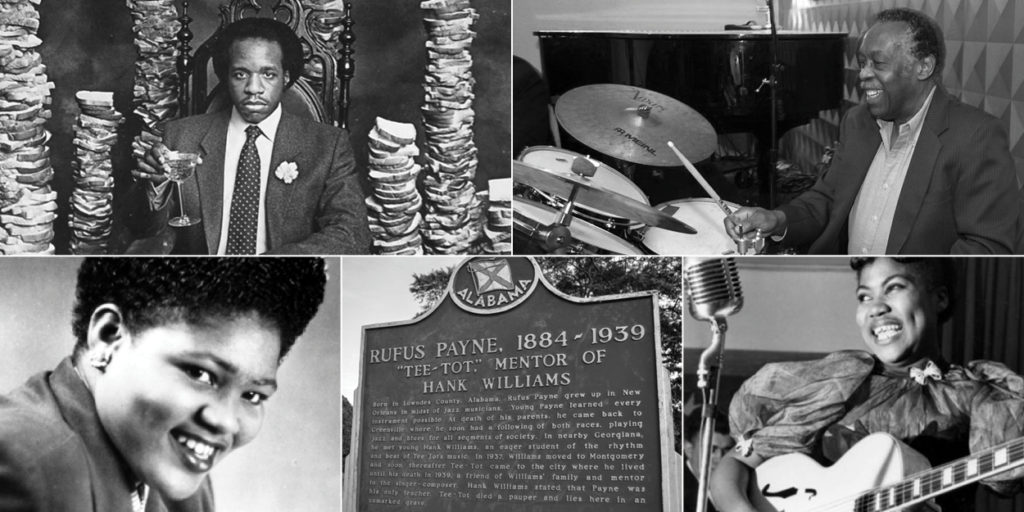 This past week we’ve lost two musical greats, each of whom left a lasting impact on music history, despite the fact that they spent much of their careers outside of the spotlight—Walter “Junie” Morrison (songwriter, producer, multi-instrumentalist, one-man studio band and funk master) and Clyde Stubblefield (James Brown’s ‘Funky Drummer’).

In honor of African American History month, today we’re celebrating the contributions of these musical masters, as well as a few of the many unsung African American talents who’ve helped pave the way for musicians of all backgrounds, changing the landscape of American music in the process.

Walter “Junie” Morrison (1954 – 2017): As a former member of The Ohio Players—serving as the driving force behind the band’s 1973 hit single, “Funky Worm”—and musical director of P-Funk (Parliament-Funkadelic)—co-writing one of the band’s biggest hits, “(Not Just) Knee Deep” (1979), Walter “Junie” Morrison experienced most of his commercial success in the 1970s, but the influence of this unstoppable “force behind the groove,” is echoed in countless contemporary tracks, including “Junie,” a last-minute addition to Solange’s critically-acclaimed album, A Seat At The Table (2016).

Clyde Stubblefield (1943 -2017): As the drummer in James Brown’s band in the 1960s and 1970s, Stubblefield’s original beats set the groove for many of Brown’s most well-known funk tunes, including “Cold Sweat,” “Get Up (I Feel Like Being a) Sex Machine” and “Funky Drummer”—which featured a drum solo that went on to be sampled on more than 1,000 tracks. Over the years, musicians have recognized his talent, making Stubblefield one of the most sampled artists to date and attracting the attention and respect of musical legends like Prince, who volunteered to pay for Stubblefield’s medical bills in a time of need.

Willie Mae “Big Mama” Thornton (1926 – 1984): While many of us are familiar with the iconic tunes, “Hound Dog” (popularized by Elvis Presley in 1956) and “Ball ‘n’ Chain” (popularized by Janis Joplin in 1967), few are aware that both songs were first recorded by rhythm-and-blues singer and songwriter, Willie Mae “Big Mama” Thornton—who did not receive compensation for either cover. Fortunately, after a lifetime of under-appreciaton for her contributions to music history, in 1984 she was inducted into the Blues Hall of Fame and her “Ball ‘n’ Chain” was included on The Rock ‘N’ Roll Hall of Fame’s list of “500 Songs that Shaped Rock and Roll.”

Rufus “Tee-Tot” Payne (1883 – 1939): Rufus Payne—nicknamed “Tee-Tot”—was a blues guitarist who performed on the streets of Alabama in the 1930s. One of his regular audience members was a young Hiram King “Hank” Williams, who is said to have first learned to play and improvise chords under Payne’s tutelage. Williams grew into one of America’s earliest and most influential country artists, celebrated for his unique fusion of hillbilly, folk and blues. Hank Williams Jr. paid tribute to Tee Tot’s influence on his father in “The Tee-Tot Song” on his 2002 Almeria Club album.

Sister Rosetta Tharpe (1915-1973): Before there was rock ’n’ roll, there was the vibrant and innovative singer/guitarist Sister Rosetta Tharpe, who performed gospel-style vocals on top of driving rhythmic accompaniment. Her sound is now recognized as one of the first precursors to rock ‘n’ roll—earning her the nicknames of “the original soul sister” and “the godmother of rock and roll.” Musicians ranging from Johnny Cash to Aretha Franklin to Little Richard have credited her powerful influence on their music. After hearing a 14-year old Little Richard sing, Tharpe spontaneously invited him to open up her performance that evening and paid him for a job well-done—making October 27, 1947 Little Richard’s first performance outside of a church, and the beginning of his professional career as a performer.

Above are just a few of the many African American artists whose remarkable talent was under-appreciated during their lifetimes.

Know of another? Please share in the comments section below!