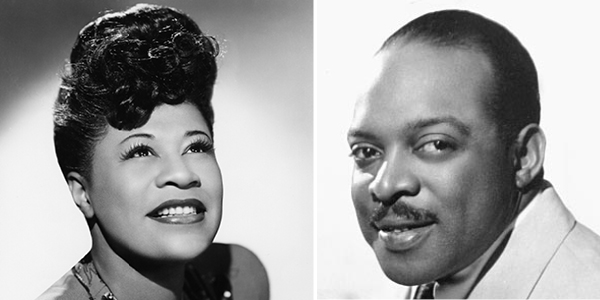 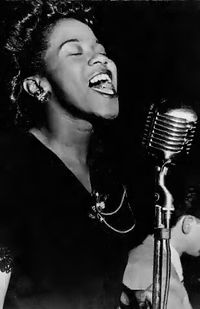 In 1934, legendary jazz soulstress Ella Fitzgerald burst onto the scene. Homeless and dressed in “tattered clothes” and men’s boots, a 16-year-old Fitzgerald took to the stage during the Apollo Theatre’s famous Amateur Hour. After shying away from the dance routine she had intended to perform, she opened her mouth and delivered a beautiful and spontaneous rendition of “Judy” that brought down the house and earned her that evening’s 1st place prize. As soon as bandleader Chick Webb heard Fitzgerald break into song, he hired her to be part of his band—a group that would catapult her rise to stardom at the legendary SaVoy and that she would eventually lead herself. Over time, Fitzgerald would tour with musical legends like Dizzy Gillespie, honing her craft and cementing her signature style. With the launch of her solo career in the 1940’s, even more audiences would discover her strong, velvety vocals, 2.5 octave range and iconic scatting. In 1958 she took home the GRAMMY Award for “Best Jazz Performance, Individual”—for her performance on the Ella Fitzgerald Sings The Duke Ellington Song Book—as well as the GRAMMY Award for “Best Vocal Performance, Female”—for her performance on Ella Fitzgerald Sings The Irving Berlin Song Book.

A legend who came into her own just after the Women’s Rights Movement and decades before the Civil Rights Movement, Fitzgerald was truly a pioneer of the times. She overcame the odds that were stacked against her with passion, determination and talent. Throughout her lifetime Fitzgerald would go on to earn 13 GRAMMY Awards and sell over 40 million albums. Her voice and rich musical legacy continue to impact the national and international musical landscape, so it’s no surprise that she’s still referred to as the “First Lady of Jazz.”

When we think of “big band,” we think of a sound that was characterized by jazz music’s legendary bandleader/pianist William James Basie—more commonly known as “Count” Basie.

After a short time studying the drums, young Basie found his love for piano—an instrument that would lead him to an early career as a pianist on the vaudeville circuit. When the touring circuit disbanded in Kansas City, Basie found work playing organ for silent films at a local theatre. It was here that Basie began his rise to stardom (and picked up the nickname “Count”). After playing with various bands in Kansas City (like The Blue Devils, the Bennie Moten Band and Count Basie and the Cherry Blossom Orchestra), Basie moved to New York City with a 13-piece band known as the Count Basie Orchestra. Under his guidance, this band solidified a sound that was crisp, distinct and free all at once. In a time when many African American bands were unable to experience notoriety and commercial success, the widespread appeal of the Count Basie Orchestra permeated racial boundaries.

With this group, Basie recorded the 1958 album, Basie (reissued in 1994 as The Atomic Mr. Basie) that earned the GRAMMY Awards for “Best Jazz Vocal Performance, Group” and “Best Performance by a Dance Band.” Basie would go on to earn seven more GRAMMY Awards. The iconic jazz big-band sound Count Basie helped to shape (especially in the era in which he helped to shape it) has earned Count Basie respect from musicians and listeners across the globe.

Check out this playlist to enjoy some tunes from the albums that helped these two musical legends win GRAMMY Awards in 1958, cementing their places in history!

The 58th GRAMMY Awards Show is just around the corner! Click here to learn more about this year’s 21 GRAMMY-nominated artists who’ve performed on Levitt stages!

One thought on “Celebrate the lives and legacies of the first GRAMMY-winning African Americans!”