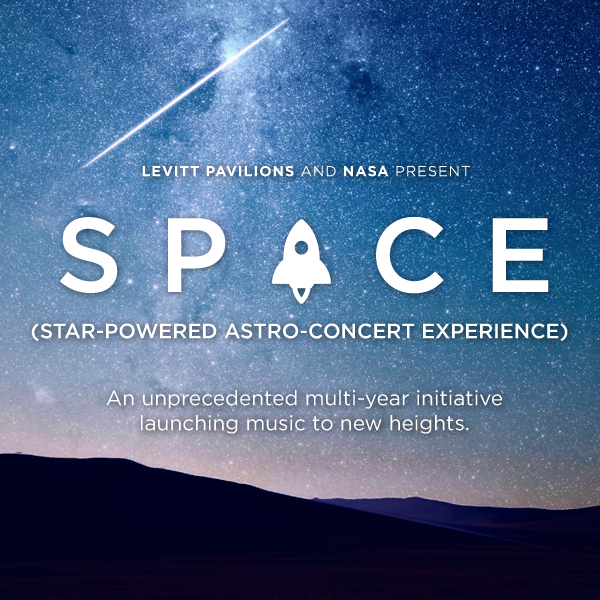 The incomparable opera singer Sarah Brightman is not the only talented musician heading to space. Starting in 2020, Levitt Pavilions will transform OUTER spaces in addition to neglected outdoor spaces!

Levitt Pavilions is thrilled to announce the launch of the Star-Powered Astro-Concert Experience (SPACE) Initiative. Through a historic multi-year partnership with the National Aeronautics and Space Administration (NASA), musicians will begin accompanying astronauts to the International Space Station (ISS) in 2020 as part of their psychological support team. During their three-month residencies, SPACE musicians will teach weekly music lessons, work with astronauts to compose songs and present a live concert from space that will be broadcast to global audiences.

Here at Levitt Pavilions, we know that music has the power to lift our mood and make us feel connected to other humans, so it was no surprise to learn that NASA has consistently encouraged astronauts to listen to and create music during long-distance space missions to reduce stress and boost morale. The SPACE initiative will make use of the diverse instruments already onboard the ISS, including flutes, keyboards, guitars, saxophones and a didgeridoo.

In a 2012 interview, Canadian astronaut and guitarist, Colonel Chris Hadfield—who won the hearts of music-lovers across the globe with his song, “Jewel in the Night,” recorded aboard the ISS—explained the following:

“When you’re a long way from home—when you’ve left the planet—it’s really important not just to take care of all the technical stuff, but you’ve got to take care of the people and the psychological side. We have psych support people in Houston and they realized that music is one of the things that’s really fundamental to people.”

To prepare them for their journeys, selected SPACE musical pioneers will embark on intensive training programs with NASA to prepare for the rigorous physical and emotional demands of traveling through space. They will also be working with Hadfield himself, who will be coaching them on strategies to overcome some of the unique challenges of performing in space—such as playing a guitar without the weight of your arm and providing the proper amount of air support while singing.

Stay tuned for upcoming announcements about this historic and unprecedented multi-year initiative that will be launching music to new heights!