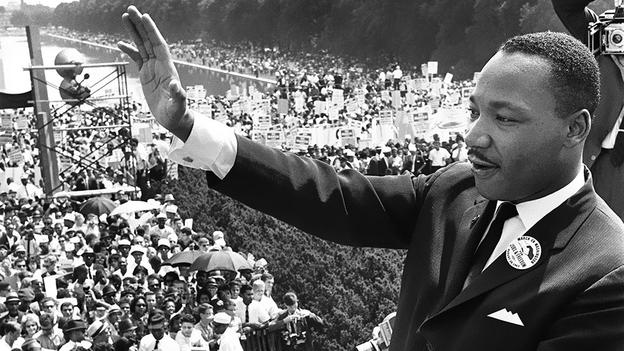 One of my favorite stories about Martin Luther King Jr. involves music. Or rather, comes back to an interaction between him and legendary gospel singer Mahalia Jackson during King’s “I Have a Dream” speech.

It’s a story that I read about years ago in Craig Werner’s A Change is Gonna Come. Jackson, already a world-famous gospel singer who had performed at Carnegie Hall, President John F. Kennedy’s inaugural ball and throughout Europe, was also an active member of the civil rights movement. She traveled with King, singing before his speeches, and while at a church in Detroit—Rev. C.L. Franklin’s (father of Aretha and Erma) congregation—she heard King invoke the “dream” rhetoric.

A few days following the Detroit speech, Jackson and King were in Washington D.C. for the March on Washington. Joan Baez, Odetta and Bob Dylan performed earlier in the day before King spoke. “The story goes that,” Werner writes, “feeling the energy starting to slip away, Mahalia leaned forward to King and whispered, ‘Tell them about the dream, Martin.'”

The revelation was electrifying when I first read it. I already owned several Mahalia Jackson records, so I was incredibly familiar with her influence on R&B, gospel and the civil rights movement. But until last year, this small, gentle nudge from Mahalia was just mythology. In August 2013, the organist at the March on Washington, Yolanda Clarke, came forward to say that she heard those famous words from Mahalia’s mouth.

It didn’t really matter to me whether the story was just legend or fact. It was about the relationship between music and everything else, and the power of word and song to inspire change. Werner writes, “At the moment when it seemed most likely that the movement just might get all of us over, it was about Martin and Mahalia, the politics and the music. More important, it was about the movement as a whole.”

One thought on ““Tell Them About the Dream, Martin.””