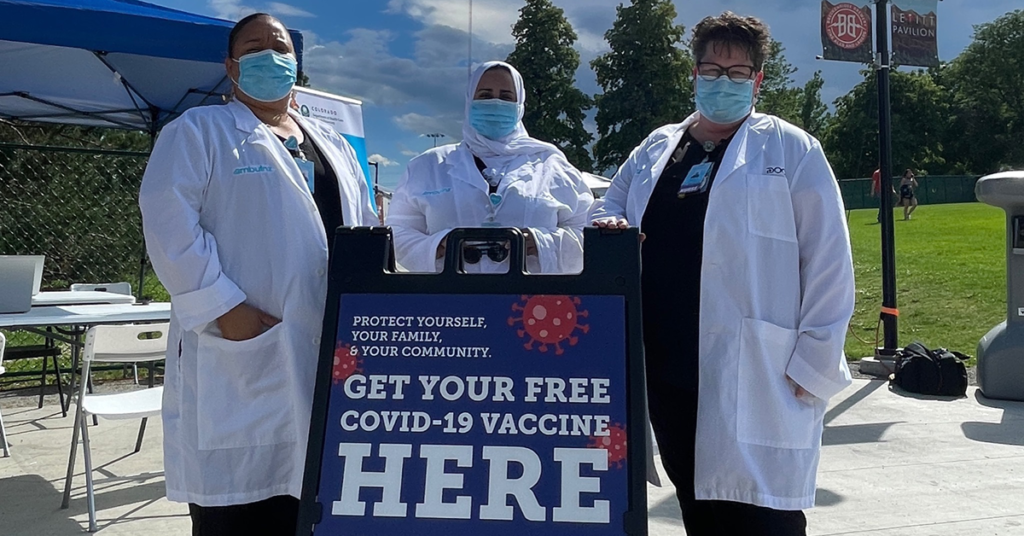 Amid the ongoing pandemic, free Levitt concerts this past season offered hundreds of thousands of people nationwide a safe outdoor space to experience the unifying power of free, live music; connect with old and new friends; and at some venues, even acquire protection against Covid. More than a thousand concertgoers chose to receive a Covid vaccine at pop-up clinics held at permanent Levitt venues and Levitt AMP concert sites in cities including Denver; Los Angeles; Carson City, Nevada; Soldotna, Alaska; and Woonsocket, Rhode Island, reflecting Levitt’s role as a trusted gathering place that not only enhances cultural life but also promotes the health and well-being of its communities. Learn how several Levitt venues, large and small, made getting a Covid vaccine more accessible.

Woonsocket, Rhode Island
Since 2018, the Levitt AMP Music Series in Woonsocket, R.I., has injected vitality into River Island Art Park and the surrounding area in this town of 40,000 people, located near Providence. Levitt AMP grantee NeighborWorks Blackstone River Valley builds affordable housing in the downtown neighborhood, and had witnessed “a lot of inequitable distribution of the vaccine,” says Meg Rego, NeighborWorks’ Director of Resource Development and Communications. “Most of the residents in our affordable housing are Black or Latino and if you looked across the state and also across the country, they were far less likely to get vaccinated.” 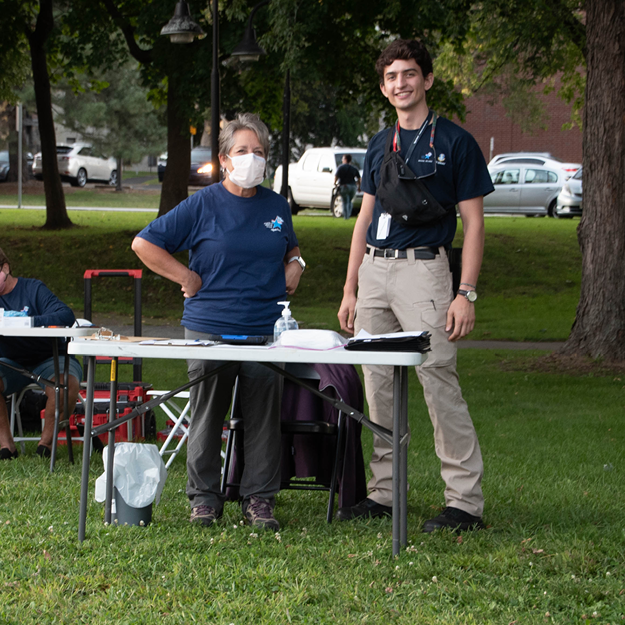 Encouraged by previous successful health-related events at Levitt AMP Woonsocket concerts, such as exercise classes and blood pressure screenings, NeighborWorks developed a partnership with the Rhode Island Department of Health and the Rhode Island National Guard to bring pop-up Covid vaccine clinics to nine of this summer’s 10 Levitt AMP concerts. While musical styles including zydeco, salsa, and West African drumming got audiences on their feet at River Island Art Park from July through September, the Levitt vaccine clinics got 67 shots into arms. By the end of the music series, audiences were able to choose between the Pfizer, Moderna and Johnson & Johnson vaccines.

“We were getting people who wouldn’t go out of their way to get the vaccine but would just drop in,” says Rego. “People could show up with their kids and while doing a family-friendly activity, could also get a shot. It was making it accessible in terms of time, location and parking.”

At the final Levitt AMP concert of the season, the clinic also offered free Covid testing. Sixty people took advantage of the service, and all the tests fortunately came back negative. 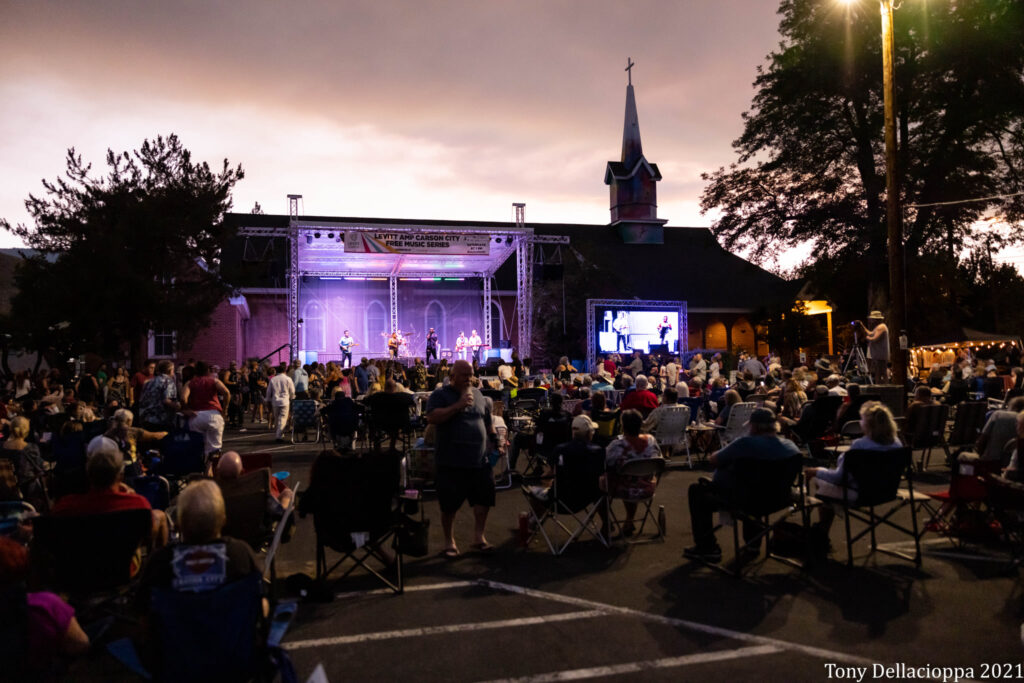 Carson City, Nevada
“A shot for a shot”—that’s what concertgoers at this summer’s Levitt AMP Music Series in Carson City, Nevada, were offered as part of a vaccination campaign that leveraged a popular concert tradition. Since 2017, Levitt AMP grantee Brewery Arts Center has transformed the city’s underused Historic District into a dynamic musical showcase drawing attendees from all over Nevada’s capital. Brewery Arts Center has a tradition of selling custom-made jello shots at Levitt AMP shows for $5 each. A devoted regular at the Levitt AMP Music Series pitched the idea of a vaccination clinic to Brewery Arts Center’s Operations Director Mikey Wiencek. “He said, ‘If you can set up a vaccination clinic, then I’ll pay for the jello shots,’” recalls Wiencek.

Wiencek reached out to nonprofit Immunize Nevada, which helped coordinate three pop-up Covid vaccine clinics at Levitt concerts in August and September. Smoke from nearby wildfires reduced concert attendance, but the concerts still drew an average of 2,700 people. The Nevada National Guard administered 28 shots total, offering a choice between the three available vaccines.

“We have a new LED video wall next to the stage so we put up messages saying, ‘Another person just got vaccinated, let’s get a round of applause!’” says Wiencek. Those over 21 years old also were eligible for the jello shot perk; at the show for Celtic band The Fire, for instance, they received a free Jameson and ginger ale jello shot.

“One of our volunteers had been trying to get vaccinated but had no car and was so thankful this was on site,” says Wiencek. “Doing these clinics lets people know we’re more than just concerts. We care about the community and want to make things easier for them.”

Soldotna, Alaska
Located in Southcentral Alaska, Soldotna has about 5,000 residents but its Levitt AMP Music Series at Soldotna Creek Park this past season drew attendees from as far as Anchorage, which is several hours away and Alaska’s most populous city. In collaboration with the Alaska Department of Health and Social Services, nonprofit Levitt AMP grantee Vision Soldotna and the Soldotna Chamber of Commerce offered Covid vaccine clinics at all 13 of this summer’s concerts.

“We wanted to see our community gather and make meaningful connections again,” says Shanon Davis, Executive Director of both Vision Soldotna and the Soldotna Chamber of Commerce. “We also wanted our community to be back to work and we really feel the best avenue for getting back to normal is having our population be safe.”

Around 600 people received either Pfizer, Moderna, or Johnson & Johnson vaccines during the Levitt AMP concerts, which ran from June through August. With funding from the state of Alaska, the clinics were even able to offer $25 gift cards from local restaurants and coffee shops to those who received a vaccine.

Davis points out that the Kenai Peninsula Borough, where Soldotna is located, has the second-lowest vaccine rates in the state of Alaska. “People had some hesitations and concerns, so it was great to be able to bring local public health officials right there to the park where people were comfortable. We also had a pharmacist there to answer questions,” says Davis. “Having vaccine clinics at such a welcoming, all-inclusive event was a perfect pairing.” 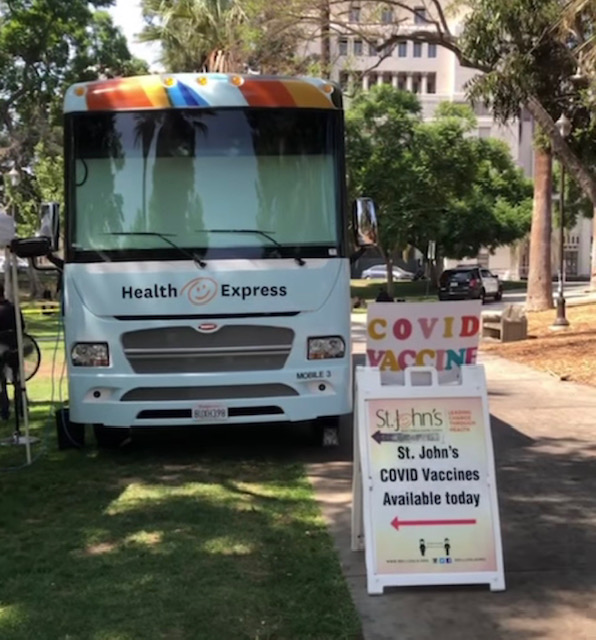 Los Angeles
For nearly 15 years, Levitt Pavilion Los Angeles has been bringing free live music to MacArthur Park, a historic park in one of the city’s densest neighborhoods that’s also a hub for immigrant and underserved populations, according to Allegra Padilla, Director of Community Relations and Partnerships for Levitt LA. “There are a lot of challenges in the surrounding neighborhood in terms of systemic inequities in health, housing, security and food. This is also one of the local communities with the highest death rates due to Covid,” says Padilla.

Having offered STD screenings and access to breast/cervical cancer screenings in the past through nonprofit partners, Levitt LA had already earned trust in the community when it came to health services. In partnership with Los Angeles County Supervisor Hilda Solis, St. John’s Well Child & Family Center, and CIELO, a nonprofit organization advocating for Indigenous communities, Levitt LA brought pop-up Covid clinics to its pared-down roster of 12 in-person concerts this past August. All three vaccines were available at various times. Padilla says about 90 percent of those vaccinated were Latino—primarily immigrants—and ranged in age from teenage to elderly. 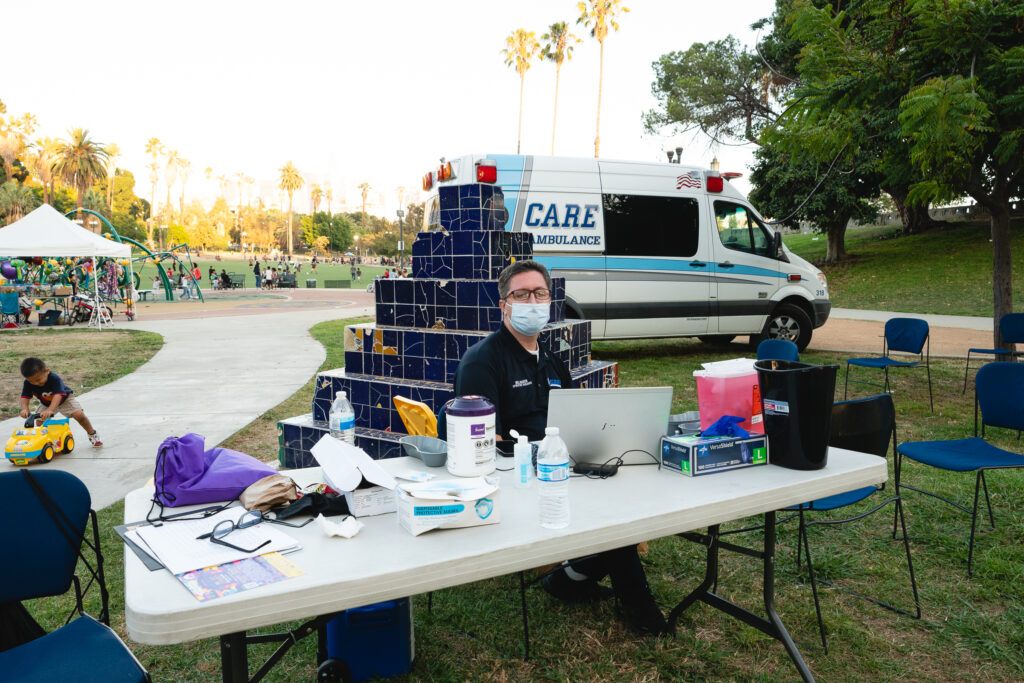 Altogether, the clinics helped more than 200 people get vaccinated. “We saw more people coming through the clinic each week—it took time to build momentum and presence,” says Padilla. “Consistency is really key when providing services to areas with high immigrant populations, a digital divide, and mistrust of institutions.”

Padilla recalls one event centered around the Mayan community where a holistic healer was asking questions about the vaccine. Later, he told her he had went ahead and gotten it. She says, “There were people who thought, ‘the vaccine’s here, I’m here, why not?’”

Denver, Colorado
Earlier this year, the Colorado Department of Public Health and Environment reached out to Levitt Pavilion Denver about setting up Covid clinics, seeking to reach the tens of thousands of people expected to attend Levitt Denver’s full season of 50+ free concerts in Ruby Hill Park.

More than 82,000 people experienced Levitt Denver’s free music series in 2021. “Surprisingly, it was the best season we’ve ever had,” says Andy Thomas, Deputy Director of Levitt Denver, which opened in 2017. “People were really itching to get out and see free music after not seeing it for a while.” 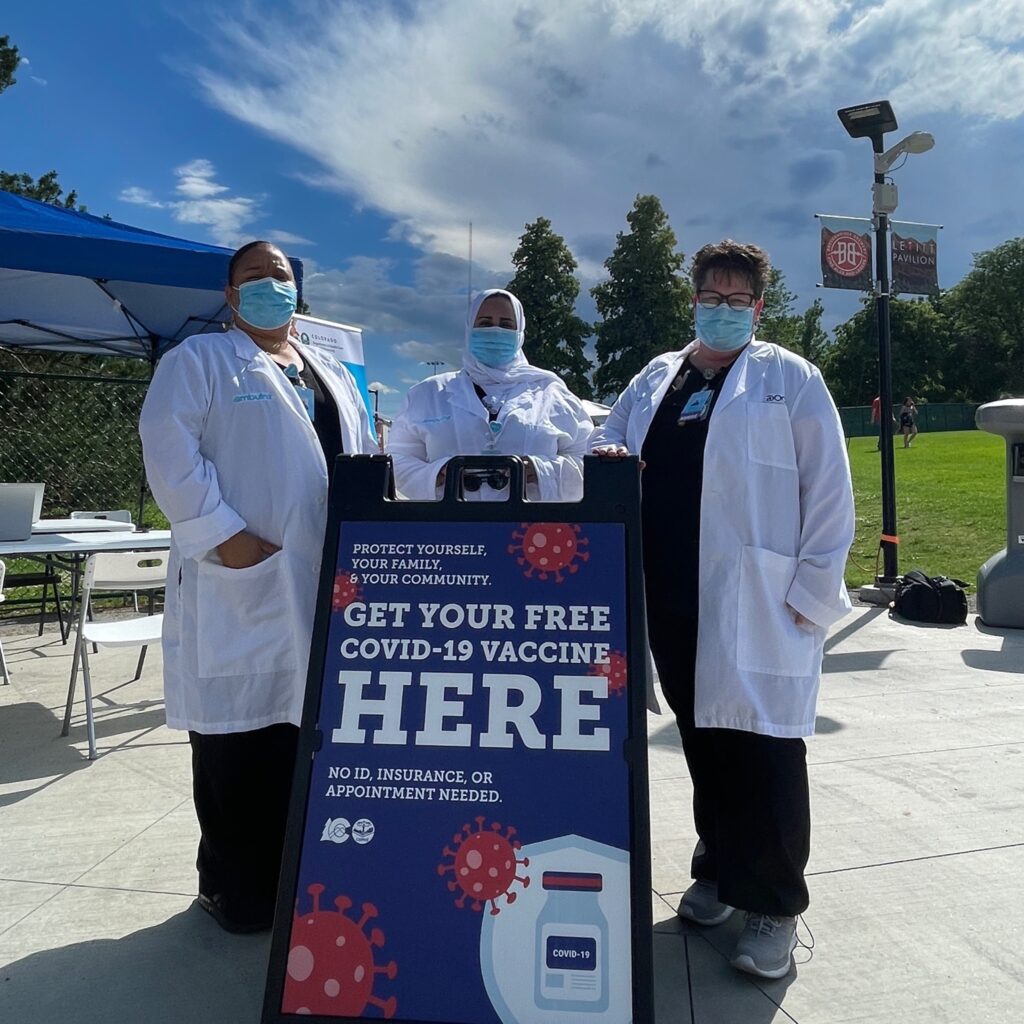 The walk-up Covid clinics during Levitt Denver’s shows vaccinated seven to ten people per night for most of the summer concert season. Thomas himself got a booster shot from one of the Covid clinics and said the whole process was smooth and efficient. The clinics eventually ceased only because a large percentage of the state population was already vaccinated.

“People didn’t know exactly where to go when vaccines were first rolling out, so it was nice to be able to have that for our patrons,” says Thomas. “We were honored to be able to offer people an easy solution to help them be safe.”

Covid vaccine clinics were also offered at Levitt AMP Music Series shows in Springfield, Illinois; Fort Smith, Arkansas; and Stevens Point, Wisconsin. And during the early phase of the Covid pandemic, CREATE Portage County, the nonprofit behind the Levitt AMP Stevens Point Music Series, manufactured face shields for first responders and senior care facilities using 3-D printers. We’re grateful to all the Levitt partners and grantees across the country who have played a role in helping to protect and strengthen their communities in the face of a worldwide pandemic, reflecting their role as trusted community spaces.