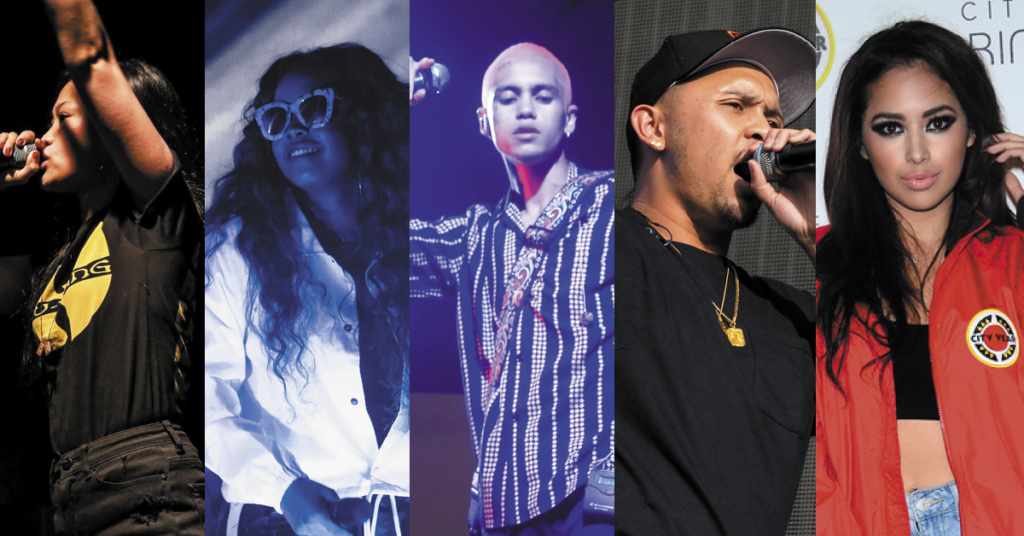 October is Filipino-American History Month and today we are highlighting talented and inspiring FilAm artists you should know!

Established in 2009 by the Filipino American National Historical Society (FANHS), this month celebrates and brings awareness to the significant role Filipinos have played in American history, both past and present. The month of October commemorates the first recorded presence of Filipinos in what is now the state of California on October 18, 1587.

Read on to learn about both well-known and up-and-coming Filipino-American musical artists who are bringing their talents into the spotlight.

Ruby Ibarra is a rapper, music producer, and spoken word artist who has performed on the Levitt Pavilion Los Angeles stage herself. And on top of her musical talents, she’s also a vaccine scientist, having earned a biochemistry degree from UC Davis.

Ibarra, 33, was born in the Philippines and immigrated to California with her family when she was four. Her music heavily centers around her cultural heritage and experience as an immigrant living in the U.S. She raps in English and Tagalog and Waray, which are two major dialects spoken in the Philippines.

“I would have done an album a disservice if I had this project talking about the Filipino American experience and not include elements of Filipino language…. Language is an important part of the culture.” Ibarra said in an in interview with The Center for Asian American Media.

When she’s not making music, Ibarra is a scientist in the biotechnology industry where she works on COVID-19 test kits and conducts research on vaccines.

The rapper has always been outspoken about her Filipino pride and identity. In an interview with Asian Journal Media Group, she said, “…when I think about the identity of what it means to be Filipina, it’s to be completely resilient, strong, and selfless.”

H.E.R, whose real name is Gabriella Sarmiento Wilson, may only be 24 years old, but her CV is quite impressive. She’s won four GRAMMY Awards for Best R&B performance, Best R&B Album, Best R&B song, and GRAMMY Song of the Year, and she also has one Academy Award under her belt for Best Original Song from the movie Judas and the Black Messiah.

Born to a Filipino mother and African American father, Wilson stated in an interview with CNN Philippines that her Filipino upbringing played a large role in her love for making music.

“Filipinos are so family-oriented! My family has always supported me….They always pushed me to hone my talents and gifts.” she said.

The R&B songstress is known for her mysterious identity and prefers to keep a low profile, because she’d rather let her music speak for itself. Her debut album, Volume 1, in which her real name and image were kept a secret, was praised by artists such as Alicia Keys and Wyclef Jean.

Upon accepting her Academy Award for Best Original Song this year, Wilson said, “Me being up there is a message to all the young Black and Filipino girls. You can be up here too.”

Not many young artists can say they were handpicked by legendary Beatles member Paul McCartney to be featured on his album, but Dominic Fike can. The 25 year-old multi-genre artist was named as one of McCartney’s favorite new artists, and was enlisted onto his 18th solo album, McCartney III Imagined, which was released earlier this year.

Growing up in Florida, Fike, who is of Filipino and African American descent, had a rough upbringing. He experienced homelessness, drug addiction, and had a mother who was in and out of jail.

Despite the adversity, Fike has become one of the biggest new artists to emerge in the music industry. Since his debut, he’s signed a $4 million contract with Columbia Records, starred in a Calvin Klein ad campaign, was featured in Rolling Stone magazine, and collaborated with artists such as Justin Bieber and Halsey.

If you’re well-versed in the Bay Area rap scene, you’ve definitely heard of P-Lo. Born Paulo Rodriguez, the 30 year-old rapper and producer from Pinole, Calif. is credited for revitalizing Bay Area rap with his hip-hop collective, HBK Gang. This year, he was featured on the Space Jam: A New Age movie soundtrack on a song with NBA superstar Damian Lillard.

Growing up in a large, music-oriented Filipino family influenced Rodriguez to launch a career in hip-hop and beat-making. He recalls listening to his father’s vinyl collection which consisted of Carlos Santana, Eric Clapton, and The Beatles records. His older brother was a music producer named “Kuya Beats” (“kuya” means “elder brother” in Tagalog).

In an interview with KQED, P-Lo reflected on the importance of representation in a genre where Filipinos are largely underrepresented.

“For people to accept this Filipino dude and rock with it, that’s what the world should be. And I didn’t have anybody to identify with that looked like me when I was growing up. So it’s important to become that.”

Jasmine Villegas, also known as Jasmine V, is a pop and R&B singer and actress from San Jose, Calif. Since her rise to fame as Justin Bieber’s love interest in the music video for his hit single, “Baby”, Villegas has taken off on a music career of her own and collaborated with rapper Kendrick Lamar on her debut single, “That’s Me Right There”.

The 27 year-old started her acting career at a young age, and has appeared on shows such as My Wife and Kids, and Disney Channel’s That’s So Raven. At the age of 16, she signed to RCA Records, and was the opening act for Justin Bieber’s 2010 world tour.

Villegas, who is Filipino and Mexican, has always taken pride in her roots and culture.

“Being Filipina and Mexican (Mexipina!), I have been blessed to learn so much about different cultures,” said Villegas during an interview with The Huffington Post. “People just want to find something in common with an artist, some way they relate to them. Once they find that connection whether it’s because they’re Latina or have curly hair or eat certain foods, they stick by you and show endless support,”

These artists are a wonderful example of the cultural and musical contributions of Filipino-Americans in the U.S, and examples of how Filipino culture is preserved in the Filipino diaspora community. May we continue to celebrate, uplift, and support them both during Filipino-American History Month and beyond.