This past summer, Levitt venues across the country were a platform for cross-cultural celebrations and understanding, bringing different pockets of their communities together through cultural festivals and concerts. From Los Angeles to Bethlehem, Pa., Denver to Arlington, Texas, read how permanent Levitt venues created space to honor the diverse music and traditions of Latin, Middle Eastern, Tejano and Indigenous Mayan cultures. 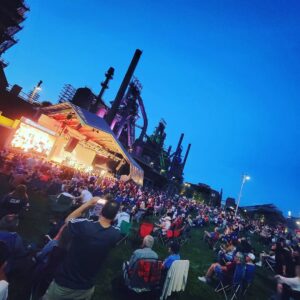 Audience members at the 2021 ¡Sabor! Latin Festival at Levitt SteelStacks

During the past decade, the festival has become a fan favorite, attracting audiences from throughout the Lehigh Valley. On the first day of the festival, performers included the Lehigh Valley Urban Latin Orquesta, a Latin band whose mission is to showcase the many sounds of Latin culture, and Ramon Rivas II, a comedian, writer, and actor who has made appearances on several TV series including HBOMAX’s Entre Nos.

The following night, Pancho Bongo y su Orquesta had Levitt audiences on their feet with vibrant Latin songs and sounds. Then, Luisito Rosario Orchestra captivated the audience with two hours of salsa music and dancing. To end the celebration, DJ’s from Mega Radio, the first Spanish radio station in northeast Pennsylvania, kept the party going until midnight.

In addition to experiencing great Latin music and performances, audiences also enjoyed culturally rich food, including Chicharrón tacos, and tostones (twice-fried plantain slices) from a local partner. Thanks to COVID restrictions being lifted one week prior to the festival, the Levitt SteelStacks team was able to host the concerts with no tickets required, and were even able to add in a local, authentic food vendor who sold out of food on both nights!

Taste of the Middle East at Levitt Pavilion Denver

In Colorado, Levitt Pavilion Denver hosted the Taste of the Middle East Festival in Ruby Hill Park on August 14, and it was a night to remember!

The festival, organized by a nonprofit of the same name, was an opportunity to appreciate and learn about the different Middle Eastern cultures that are largely prominent in Denver. As of 2017, the city is home to one of the largest Arab American populations in the state.

“The music was something that we’ve never had on our stage, and it was amazing,” said Levitt Pavilion Denver’s Executive Director Chris Zacher. “We hosted artists from Iran, Syria, Saudi Arabia and the United States. What stood out the most for us, outside of the music, was the food.”

With over around 6,000 people in attendance, attendees were treated to a plethora of delicious Middle Eastern food from over 10 local food vendors which consisted of Syrian sweets, Turkish coffee, and manooshe, a Lebanese street food made of flatbread and lamb or beef. Activities at the event included cup reading, a popular fortune telling method originating from Turkey, and henna, a temporary form of body art popular in the Middle East. 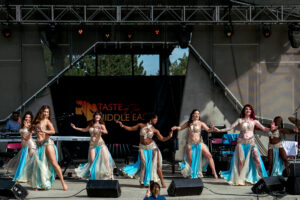 Based on the event’s livestream on the organization’s Facebook page, which received over 1,000 views, it was clear that the audience loved every second of the performances. Many participated in the traditional Dabke dance, a joyful, Arabic folk dance that combines line dancing and circle dancing in which groups of people interlock arms, tap and stomp their feet, and sing or chant while moving in a circle.

You can watch the livestream here. 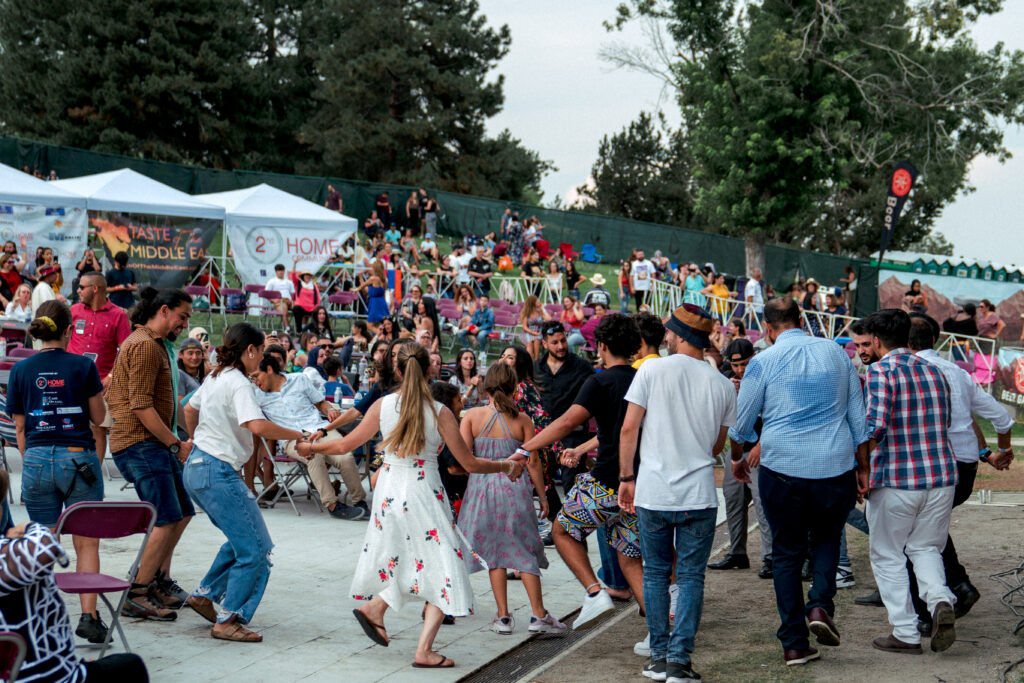 “Festivals like this bring multiple communities of people together who might not normally share the same space and time. Being able to celebrate the music, food and culture of our neighbors was an amazing experience for everyone who attended,” said Zacher.

Levitt Denver plans to continue to work with the Middle Eastern community of Denver for more concerts in the future.

Over on the West Coast, Levitt Pavilion Los Angeles celebrated indigenous Mayan culture by hosting the 4th Annual Mundo Maya Day on August 8 in MacArthur Park, in partnership with the Mundo Maya Foundation. The event celebrated the contributions of people of Mayan heritage and featured traditional ceremonies and rituals, arts and crafts, dance performances, culturally-inspired cuisine, and games including the Mesoamerican ballgame, a sport that can be traced back to Mayan communities as far back as 250 CE. Musical guests included rapper Dino Chan, dance group Folklorico Kukulkan and Latin pop singer-songwriter Perla Lopez.

The Mundo Maya Foundation was founded in 2000 with a mission to inspire cultural diversity through education and engagement of local and global communities. Their work seeks to promote and protect Mayan arts and the Indigenous cultures of the Yucatan Peninsula, with Mundo Maya Day being their annual celebration of indigenous Mayan culture. Levitt LA has been collaborating with the Mundo Maya Foundation for years to co-curate and produce the annual Mundo Maya Day celebration.

“Our team at Levitt LA is thankful for the continued collaboration with the Mundo Maya Foundation and we look forward to continuing to hold space and celebrate the many cultures and communities that make Los Angeles vibrant and diverse,” said Allegra Padilla, Director of Community Relations & Partnerships at Levitt LA.

You can watch the livestream of the event here.

Down in in Texas, Levitt Pavilion Arlington celebrates Tejano music, also known as “Tex-Mex,” throughout its season. Dating back to the 1930s, Tejano music is a popular musical style that fuses Mexican and Texan music and reflects the diversity of the region.

This past summer, Levitt Arlington presented over a dozen Tejano music concerts, including artists such as The Hometown Boys, one of the most celebrated Tejano groups in the Southwest and Latin Express, an award-winning band consisting of brothers Carlos D. Saenz and Leo G. Saenz. Both Saenz brothers have been inducted in the Tejano Roots Hall of Fame.

A highlight of the season was the July show featuring Suentatron, who lit up the night with their upbeat Latin pop tunes. The group, created by brothers Mexia and Giovanni Hernandez, is known for their fusion of pop, cumbia, rap, and norteño, a musical genre originating from the folk ballad traditions of Northern Mexico and the Texas-Mexican border region. Their energetic and lively performance captivated the crowd, and as the show came to an end, the audience was chanting for an encore!

Nearly 2,000 viewers tuned in to Levitt Arlington’s livestream of Suenatron’s performance.You can watch the show here. 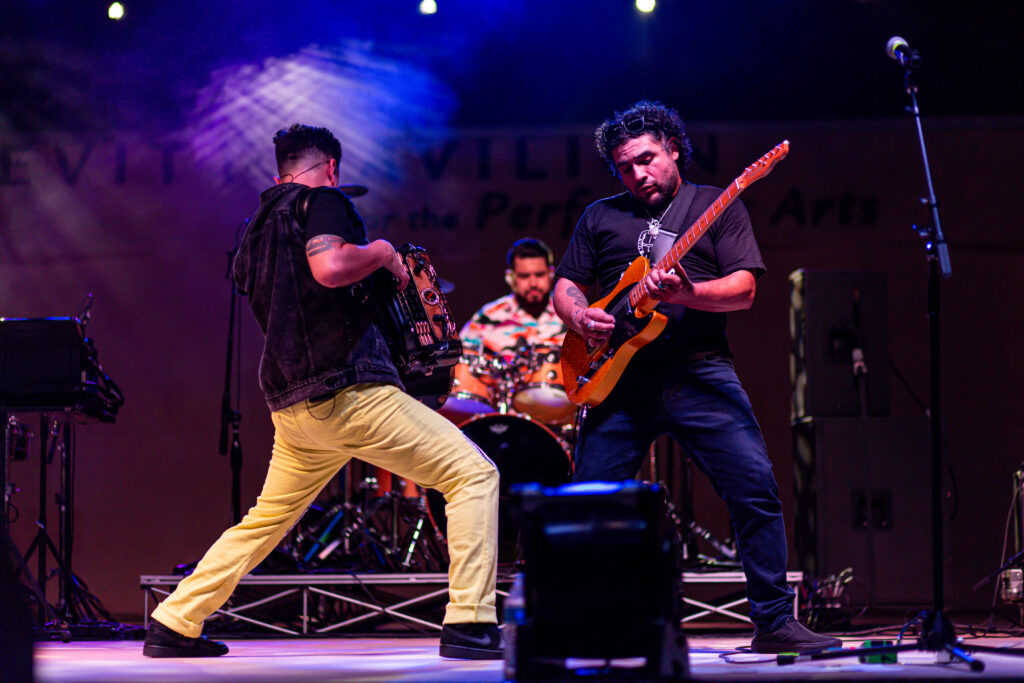 Promoting cross-cultural understanding, bridging communities, and creating spaces where all feel welcome reflect the way Levitt venues continue to embrace Levitt’s mission of creating community through music. Whether it’s through a cultural festival or show, celebrating the unique, diverse cultures found in Levitt communities depends on partners, sponsors, community leaders, and supporters coming together to bring these concerts to life. We look forward to future cultural celebrations at Levitt venues across the country that will continue to bring communities together and celebrate a diversity of music, traditions and cultures!