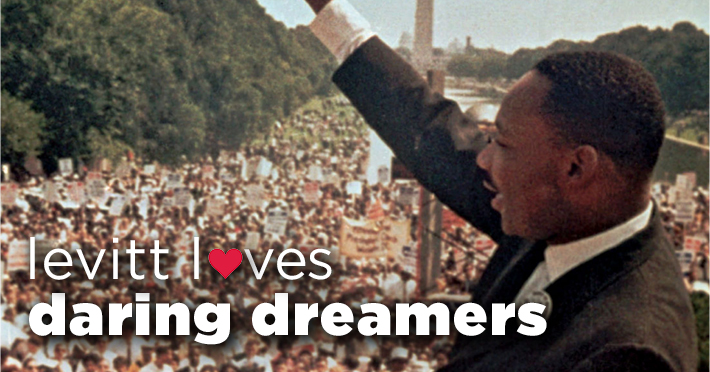 Today we celebrate the life and legacy of ‘daring dreamer’ and visionary American civil rights leader, Dr. Martin Luther King, Jr. Drawing inspiration from his faith and the peaceful teachings of Mahatma Gandhi and activist Bayard Rustin, Dr. King devoted his life to the fight for equality for African Americans and all victims of injustice. In his brief 39 years, the Atlanta-born Baptist minister organized countless nonviolent protests—including the Montgomery Bus Boycott, the Birmingham Campaign, the Selma to Montgomery marches and the March on Washington—and founded the Southern Christian Leadership Conference, which played a key role in the Civil Rights Movement. Named TIME’s 1963 “Man of the Year” and honored with the 1964 Nobel Peace Prize, Dr. King became an icon of hope whose actions helped pass the Civil Rights Act of 1964 and the 1965 Voting Rights Act. In 1963, Dr. King shared his dream of a nation where his four children would “not be judged by the color of their skin but by the content of their character.” His courageous life continues to inspire and empower generations to bring his ‘daring dream’ to life.