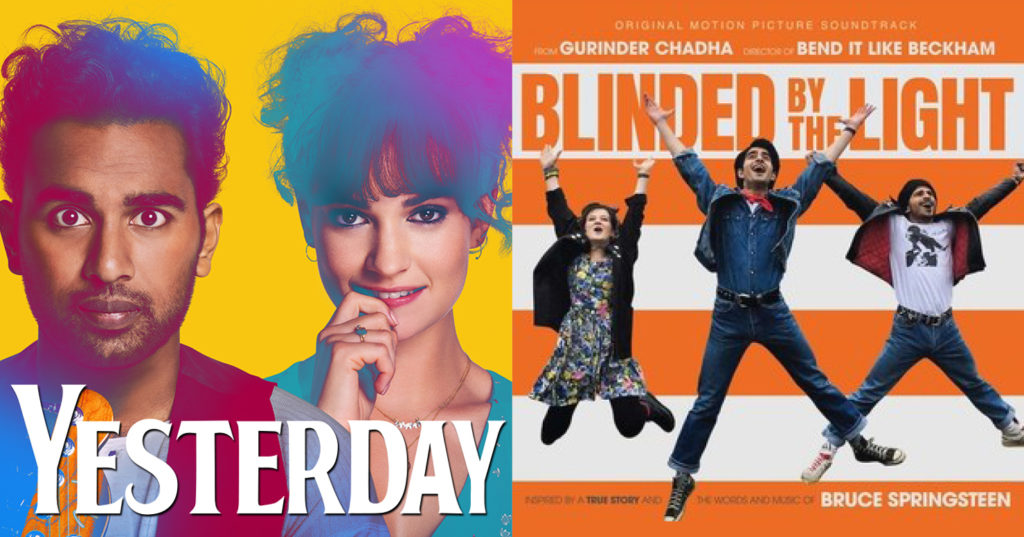 Yesterday and Blinded by the Light put music front and center, with each film celebrating the prolific, award-winning catalog of an industry-shaping artist. Told from the fan’s perspective, the films invite audiences to rediscover the work of The Beatles and The Boss alongside its main characters—reminding us all of their musical genius and the universal appeal of their work. Read on to learn more about these two films and the timeless music that inspired them!

Yesterday | ft. music by The Beatles

Described as “a light summer breeze of escapist fun” by Rolling Stone, playful British sci-fi meets romantic comedy Yesterday tells the story of struggling musician Himesh Patel and his unlikely launch to stardom. After an accident, Patel discovers he is the only person who remembers The Beatles. He amasses an adoring fan base and critical acclaim as he shares their music with the world. “No one has ever written this many great songs,” says a reporter in the movie, reminding viewers of the magnitude of The Beatles’ work.

By the time The Beatles made their way to the United States in 1964, ‘Beatlemania’ was already in full force in the U.K.—even Queen Elizabeth found the Liverpool-based, mop-top wearing ‘Fab Four’ to be “young, fresh and vital.” Their debut U.S. performance on The Ed Sullivan Show was watched by a record-setting 73 million people, signaling the start of ‘the British Invasion’ and launching the group into international stardom. Throughout their genre-pushing, decade defining eight-year career, The Beatles recorded 13 studio albums filled with chart-topping tracks and went on to experience unparalleled success—selling 183 million albums (making them the best-selling artist to date); getting inducted into the Members of the Order of the British Empire and the Rock & Roll Hall of Fame; and winning a plethora of awards, including an Academy Award, 15 Ivor Novello Awards, seven GRAMMY Awards and a GRAMMY Lifetime Achievement Award.

Blinded by the Light | ft. music by Bruce Springsteen

Inspired by the true story of journalist Sarfraz Manzoor and his love for Bruce Springsteen’s music, Blinded by the Light is a coming of age comedy-drama about an unexpected source of inspiration. When sensitive British Pakastani teen Javed is introduced to Springsteen’s music, he is struck by the parallels between his life and the ‘working class hero’s’ lyrics. Springsteen’s lyrics give Javed strength, hope and motivation to find his own voice and with it, an escape from the intolerance of his hometown. According to Empire’s recent review, Blinded by the Light combines “both the universality and specificity of Springsteen’s music,” making it “an exuberant anthem to the importance of music, the need to be seen and the hope of new possibilities.”

Inspired by The Beatles’ 1964 performance on the Ed Sullivan Show (mentioned above) New Jersey-born Bruce Springsteen went out and bought his first guitar when he was 13 years old. After years of gigging and recording, his third album, Born to Run (1975) propelled him into the spotlight and onto the covers of TIME magazine and Newsweek. To this day, ‘The Boss’ continues to honor his roots, using his iconic raspy vocals to share stories of working-class America. To date, he has recorded 19 studio albums; sold 65.5 million albums worldwide; been inducted into the Rock & Roll Hall of Fame; and received dozens of awards, including two Golden Globe Awards, an Academy Award, 20 GRAMMY Awards and the Presidential Medal of Freedom (2016).

There’s still time to squeeze in some summer fun, so head over to your local movie theatre and rediscover the iconic music of The Beatles and The Boss!

One thought on “Celebrate the lasting legacies of The Beatles and The Boss at your local movie theatre!”