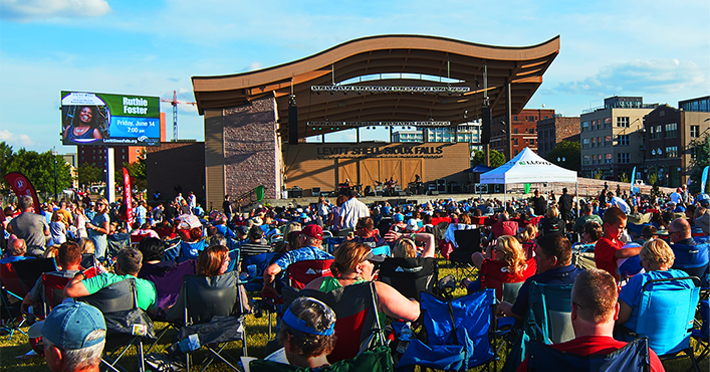 The City of Sioux Falls marked the beginning of a new chapter earlier this month when the newly completed Levitt Shell Sioux Falls, the 8th permanent Levitt venue, held its inaugural concert on June 14th. Over 4,000 people from across the city gathered on picnic blankets and lawn chairs to celebrate the occasion and watch GRAMMY-nominated blues artist Ruthie Foster give an awe-inspiring performance. Among them were the volunteers, staff and board members of the Friends of Levitt Shell Sioux Falls, the nonprofit organization that led the development of the venue through years of collaboration with the Levitt Foundation and the City of Sioux Falls. Levitt Foundation Board President Liz Levitt Hirsch and board members from both the Foundation and the national network of permanent Levitt venues also attended in support, along with the City’s mayor, Paul TenHaken. The celebration continued the following night, when Levitt National Tour headliner Flor de Toloache, the GRAMMY-winning all-female mariachi sensation from New York City, took to the stage in front of a packed lawn. Acclaimed children’s entertainer Phil Baker brought the opening weekend celebration to a close the next day with a special performance appealing to both the young and young at heart. Levitt at the Falls will host a total of 30 free concerts through August, expanding to 50 free concerts every summer beginning in 2020.

A dream 8 years in the making
The festive opening weekend realized an idea that came to light in 2011, when former lawmaker and lifelong Sioux Falls resident Tom Dempster received a phone call from a high school friend living in Pasadena, Calif. Tim Boe, now deceased, was a frequent concertgoer at the Levitt Pavilion in Pasadena, and boldly told Dempster, “Sioux Falls needs a Levitt.”

Change was already afoot in Sioux falls at the time of Boe’s phone call. The city’s population was soaring, and immigrant and refugee communities were bringing newfound cultural diversity to the once-largely Caucasian Midwestern city. At the time, over 60 different languages were spoken in the Sioux Falls School District (today, that number has increased to 80). In addition to a growing need for accessible arts and events, city and community leadership were seeking ways to bring its increasingly diverse population together. Meanwhile, the entrance to one of Sioux Falls’ most significant outdoor spaces was lying dormant—Falls Park West, a sprawling green space adjacent to the city’s bustling downtown and just minutes away from the cascading waterfalls that gave the city its name.

A concert space like no other
The plan to bring a free outdoor music venue to Sioux Falls was quickly met with an outpouring of enthusiasm and support from residents, as well as the city’s business and philanthropic communities. Dempster established the Friends of Levitt Shell Sioux Falls nonprofit to bring advocates together and coordinate the effort. Realizing the enormity of the project, he asked Jennifer Kirby, a seasoned volunteer leader of nonprofits and capital campaigns, to be the organization’s co-chair, alongside him. Kirby later took the helm as board chair and through her leadership, the Friends of Levitt nonprofit developed a public/private partnership with the City of Sioux Falls and the Mortimer & Mimi Levitt Foundation. 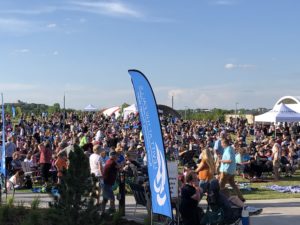 Of the $4.6 million needed for the project, the City covered $2.5 million, the Foundation provided $500,000, and generous donations from businesses and the community, including a major gift from the Kirby family, covered the rest. Denver-based architecture firm Sink Combs Dethlefs was hired to create the concert space, breathing life into the homegrown design concept. Inspired by the shape of the Big Sioux River, the fluid, organic shape of the Shell’s roof was conceived by Friends of Levitt Shell Sioux Falls board member Catherine Dekkenga, who drew the first draft on a napkin. Sioux Falls Parks Director Don Kearney called the cooperation, “a testament to the teamwork and perseverance by all parties to make this project happen for our Sioux Falls community.” With the venue’s construction underway, Nancy Halverson was hired in the summer of 2018 to steer the Friends of Levitt Sioux Falls into the future as the organization’s first Executive Director.

From left to right:  Sharon Yazowski, Nancy Halverson, and Liz Levitt Hirsch gear up for the opening ceremony

Growing anticipation
The construction crew put the finishing touches on the new venue in early June, and as opening weekend approached, Sioux Falls was buzzing with excitement. “I hope it can bring everyone together. I want everyone to feel welcome. I want everyone to feel like they have a chance to experience live, outdoor music,” Kirby told reporters at the Argus Leader after being awarded a Challenge Coin by the City for her role in the project. On the day of the opening, Liz Levitt Hirsch joined Halverson and headlining artist Ruthie Foster on KELOland News to discuss the inaugural concert. Levitt Hirsch expressed her gratitude for the community that made the transformation of Falls Park West possible, saying, “What I’m really proud of are the wonderful people of Sioux Falls.” Later, when asked her opinion on Foster’s GRAMMY-nominated blues music, Hirsch responded, “Ruthie’s going to drive an arrow though your heart!” Halverson added, “There’s no better match [for the inaugural concert] for our mission of building community through music.” 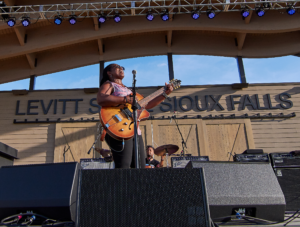 The day of the concert brought clear skies and a Midwestern sun that remained present well into the evening. Mayor TenHaken, Levitt Hirsch, Halverson and Yazowski all spoke before the enthusiastic crowd, giving well-deserved acknowledgement to the many people who had made the momentous occasion possible, including Dempster and Kirby. Kirby later remarked that she had “never seen such excitement in the community” or “joy on people’s faces.” Bringing Levitt to Sioux Falls, Kirby concluded, “has already made it a better place to live, work and play.” After an opening performance by Groove Inc, a local drum corps, Foster took to the stage and Levitt at the Falls’ inaugural concert was underway.

Twilight had descended upon Falls Park West by the time the music was over, but conversations between friends and neighbors lingered on. Opening weekend brought thousands of people together in Falls Park West, and Levitt Sioux Falls is quickly becoming a beloved cultural destination. Halverson later put into words what many were feeling: “Our community has fallen in love with Levitt, and we look forward to much more fantastic music and community building for years to come.”