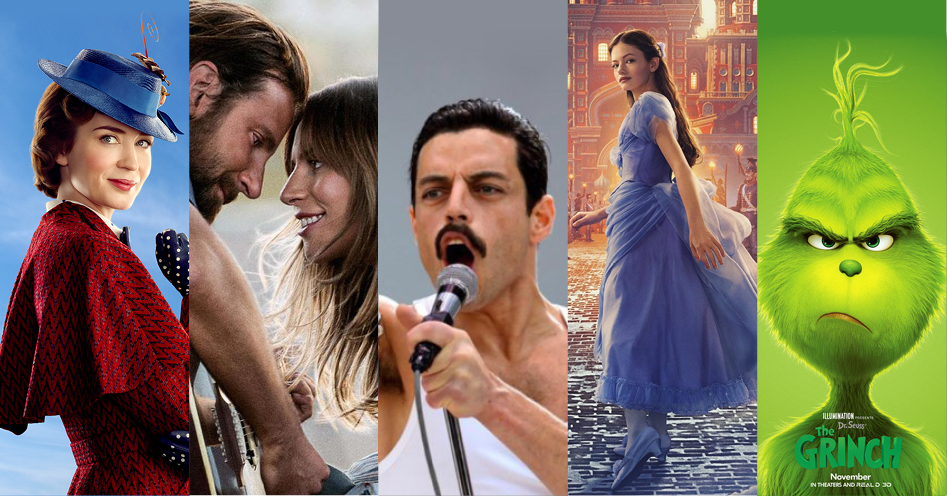 ‘Tis a time of celebration and festive music—and with a plethora of movie musicals playing this season, you can experience both while cozying up with friends, family or loved ones at your local theater.

As we head into another holiday weekend, here are some fun facts about this season’s movie musicals and the vibrant soundtracks bringing them to life. Interestingly enough, each film takes viewers on a new sonic journey while paying homage to beloved pop culture icons of the past—both real and imagined—ranging from Queen’s dynamic front man to a magical nanny with tunes to cure any and all ailments.

In this sequel to the 1964 Disney classic that added “su·per·ca·li·fra·gil·is·tic·ex·pi·a·li·do·cious” to mainstream vocabulary, the magical Mary Poppies returns to London two decades after the original story’s end to care for the next generation of Banks children. With such a memorable original score by the Sherman Brothers, lyricist Scott Wittman and composer Marc Shaiman—who are best known for Hairspray—set out to create a score that paid homage to the past while bringing life to the distinct new story being told. “This score is such a love letter to that Sherman Brothers score and to the original,” explains Lin-Manuel Miranda (who plays Burt in the new movie) “It’s a joy to be a part of it.” With a soundtrack filled with songs like the uplifting “Nowhere To Go But Up” and the imaginative “A Cover is Not a Book,” you’re bound to leave the theater humming.

A Star is Born

This beautiful, heart-wrenching tale follows three earlier adaptations—first in 1937 with Janet Gaynor at the helm, followed by a 1954 musical version starring Judy Garland, and most recently a 1976 musical version featuring Barbra Streisand. The film features the raspy rock vocals of the film’s director and co-lead, Bradley Cooper, alongside the raw, soaring vocals of Lady Gaga who boldly performs without the theatrics that generally accompany her performances. During her screen test, she recalls Cooper asking her to remove her colorful makeup. “Completely open,” he said. “No artifice.” The soundtrack has seen chart-topping success with tracks like the poetic, piano-driven “Always Remember Us This Way” and “Shallow”—which received four GRAMMY nominations earlier this month.

This 20th Century Fox’s musical biopic tells the story of Freddie Mercury’s rise to fame as the dynamic front man of Queen. The film brings to life some of the group’s most iconic hits with singer and actor Rami Malek boldly taking on the role of the legendary vocalist. To achieve the full effect of Mercury’s powerhouse vocals, Malek explains that the voice audiences will hear is, “…an amalgamation of a few voices. But predominantly it is my hope and the hope of everyone that we will hear as much Freddie as possible. I think that is the goal for all of us.” While Freddie Mercury boasted a one-of-a-kind talent, Malek gives electric performances of Queen favorites like “Bohemian Rhapsody” and “We are the Champions.”

The Nutcracker and the Four Realms

Disney’s new live action film brings a timeless childhood classic to life once again. Featuring world-renowned pianist Lang Lang, London’s Philharmonic Orchestra and conducting by the esteemed Gustavo Dudamel of the LA Phil, James Newton Howard’s original score brings a modern twist to Tchaikovsky’s classic 1892 ballet score. Howard explains that the score is elegant and emotional. “It’s all about the storytelling,” he said. “The score is very traditional—a big orchestra score—with lots of woodwinds and strings, plus tinkle bells and celeste and chorale music, including a boys’ choir.”

Following in the footsteps of the 2000 live-action film starring Jim Carrey, this is the second feature-length film adaptation of Dr. Seuss’ classic 1957 book, “How the Grinch Stole Christmas!” Mentored by Pharrell—who enlivened the Despicable Me movies with his playful tracks—Tyler, the Creator has developed a theme song for the iconic green character with a heart “two sizes too small” that’s simultaneously fresh and nostalgic (listen here!). He recently tweeted that his goal with his Grinch EP was to make Christmas music that wasn’t “too xmasy” and that he was “keeping seven-year-olds and their parents in mind.”

If you’re looking for a fun way to relax, refuel and enjoy some festive music during this busy season, look no further than the movie musicals at your local theater!